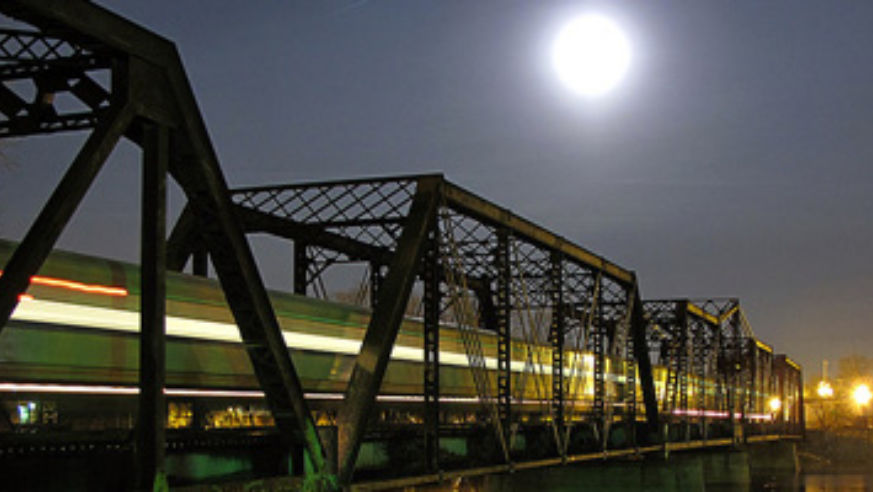 Courtesy amtrak_russ/Flickr
When was the last time you were on a train?

I love train travel. Maybe it’s just in my blood—one of my great–grandfathers worked for the Erie–Lackawanna Railroad in the early 20th century. Maybe it’s because I ride a train up and down the eastern shore of the Hudson River every working day. Or maybe it’s just because at an early age I fell hard for the lonesome whistle of a passing locomotive. Whatever the reason, riding the rails has always been my preferred way of getting from Point A to Point B.

So I was heartened to read Ron Nixon’s piece in the New York Times reporting that Amtrak has staged a comeback, especially in the Northeast Corridor between New York and Washington, where it now accounts for 75 percent of travelers. Amtrak, a for–profit corporation established in 1971 and subsidized by the U.S. Department of Transportation, reports that annual nationwide ridership is at an all–time high of 30 million. Since 2000, when the company introduced its high–speed Acela trains, it has steadily grabbed Northeast market share away from airline shuttles due in part to rising airfares, heightened airport security in the wake of the 9/11 attacks, and the overall hassle of delayed flights and surface transportation to and from airports.

I can personally attest to the glories of commuting on a train—in fact, much of what you read in Budget Travel has either been written or edited from a window seat on Metro North’s Hudson line. Unlike airlines, Amtrak offers the traveler power outlets, Wi–Fi on select routes, and the ability to use mobile phones throughout the trip.

Ready to ride? Amtrak’s fares from New York to Washington D.C. start at $49 one way. And of course trains operate other well–traveled routes across the U.S.: A midweek overnight on the City of New Orleans will get you from Chicago to New Orleans for $117, and the Pacific Surfliner coasts from San Luis Obispo, Calif., to Los Angeles midweek for $40.

Tell me about the last time you rode a train—and whether you’re ready to hop aboard again.

Trains Versus Planes? Survey Shows a Pull Towards Tracks

35 Passport Stamps Worth Bragging About