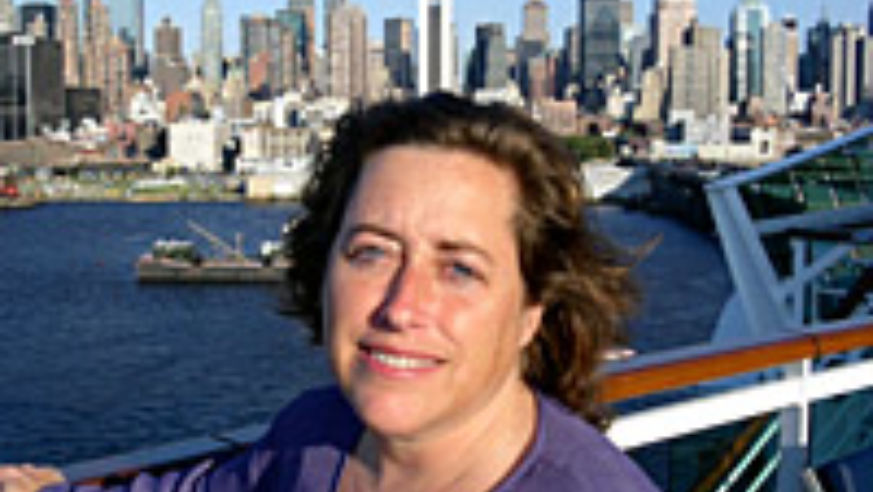 We recently invited our readers to ask questions of cruise expert Carolyn Spencer Brown, editor of CruiseCritic.com. Here are some of Brown's answers to the most commonly asked questions:

The Caribbean has been hurt by hurricanes. Will this affect my fall cruise? The news is pretty bad we hear, particularly in Grand Turk. At this point, damages to the island and the cruise center are still being assessed. However, my best guess it that upcoming itineraries will indeed be impacted—you can check the cruise line's Web site or news sites like Cruise Critic for the latest information.

Which line and destination have the best singles cruises for women, with ages ranging from 45 to 65. Hi, this is such a broad question—I'll try to get you started and then let's see. In the big ship, mass market end of things I really like NCL's newer ships for women traveling together; they've got great spas, no rigid rules about how you dine, lots of restaurants, and plenty of nightlife.

For a somewhat more sedate experience, I also like the upscale Crystal; there are gentleman hosts to dance with, a great spa, nice alternative restaurants. The line practices a set-seating, set-tablemate evening dining scenario and I've noticed that it takes more care in matching passengers. If you want a singles cruise per se, my suggestion is to book through one of the handful of travel operators that specializes on putting these together.

Best cruise lines for teens? Some examples include NCL' Norwegian Gem, which sails from New York on weeklong Bahamas cruises this fall, features a teens-only club/disco, an arcade, a huge sports court and Nintendo Wii on the big screen. If "teenager" means around14, I'd suggest you look at lines like Royal Caribbean (on its Voyager and Freedom class ships) and Carnival because they do a very good job with that age group—both in their on-board programs and on-shore tour options. As for destinations, I'd definitely try for a Western Caribbean itinerary that calls at places like Belize, Cozumel, Mexico's Riviera Maya and Jamaica; there are so many fun, adventurous tours, from ziplining to scuba.

What are the best cruise lines for kids? We have two girls, ages 4 and 2. I am sure your two girls will love cruising. I'd suggest looking for a cruise line that has children's programs tailored to their age groups. If they'd like to stick together, Carnival places 2- to 5-year-olds together in its Toddlers group for arts and crafts and sing-alongs. Royal Caribbean, on the other hand, has a different break down that would place your children into different groups. 18-36-month-olds fall under Aquatots, where they can participate in sing-alongs and play with age-appropriate toys while your eldest would hook up with the Aquanuts for activities like story time and "toilet paper soccer." Other cruise lines with stellar kid's programs include Disney, Princess, and NCL.

I think that Royal Caribbean has an outstanding program for kids of all ages so I'd definitely recommend the line. Especially the newer ships, which have more bells and whistles (recreational options, water parks, etc.). One note: Nickelodeon just completed its first ever charter—complete with characters and special events.

I want to take my 9-year-old nephew on a cruise, but I do not know if he requires a passport or if his birth certificate would suffice. Does he require a passport? At what age is a passport required? Thank you! This is a great question, Cadiz, glad you asked it. If the child is not yours, you must have special documents with you, notarized, that give you permission from the parents to take him out of the country (which all cruises do, even U.S.-based trips). He'll also need his passport but don't forget the first because you will not be permitted onboard otherwise.

My fiancee and I are attempting to plan a honeymoon for April of next year and we were wondering what suggestions you would have for younger (we are in our early thirties) couples. We don't want a circus. If you want to avoid the circus, aim for smaller ships. I'd recommend Windstar (they're sailing ships with cruise ship amenities) and the aforementioned SeaDream, which is also incredibly romantic. Both cruise the Caribbean and both tend to visit some of the lesser known islands so you'll be away from the crowds onboard and in port. Congratulations!

I'm taking an NCL (Norwegian Cruise Lines) cruise soon. The balcony rooms seem to be full. Might there be a way to get upgrade to a balcony room at the last minute? What I'd suggest is that you make sure your travel agent (or NCL if you booked directly) knows that you're interested in upgrading (and paying for it) and then stay on top of the situation, call every week until you leave if you have to. Cruise lines don't hold on to much. [They almost never hold unsold rooms until the last-minute; if they say they're no rooms, it probably means they are no rooms.] Stay on it and good luck.

What is the best way to not get seasick & what is the best thing to do if you do get sick? Most of today's cruise ships are so big and well stabilized that you won't feel any motion—and probably won't get seasick. If you are prone to motion sickness, however, there are many remedies to take along. If you are very prone to seasickness, ask your doctor before you leave home for the Transderm patch, available by prescription. Otherwise, queasiness can usually be relieved by an over-the-counter medication like Dramamine or Bonine.

Alternative remedies include ginger capsules and acupressure wristbands, available at most pharmacies. If all else fails, I find that a nice ginger ale settles my stomach! Wishing you smooth sailing...

What's one of the best, undiscovered values in cruising today? South America as a cruise destination is still (amazingly to me) under the radar. It's just fantastic, you've got cities with European-style cuisine and shopping, like Buenos Aires, gorgeous beaches in Rio and other parts of the Brazilian coast, nature all throughout Argentina (penguins, tundra) and then the incredible Chilean fjords which are like Alaska's but better (and less trafficked).

The season typically runs November - early March (it's the flip side of the Northern Hemisphere so it's the region's spring, summer and fall). And as always, cruises in the beginning and at the end tend to be good values. Also, remember too that low season for cruising in general is lowest after Thanksgiving and before Christmas—which fits right into prime time South America— so I expect there will be plenty of good deals.

South America is basically divided up into Amazon cruising and round-the-horn trips. The latter is a better choice for your first time. You go between (generally) Buenos Aires and Santiago, dipping sometimes as remotely as the Falkland Islands and even drive-bys in Antarctica.

I am looking to plan a family reunion, lots of couples age "60" up, but also, children in their 30s with kids. I would like to know what cruise line, what time of year and where it may go that would give us the best deal for our money and time. Good luck! Cruise Critic has a useful piece on the site called At Your Service: Planning a Friends and Family Cruise. It was written by someone who tackled a similarly immense trip planning project (and it was her first cruise!) and it'll give you her perspective.

For multi-generational groups, I like Princess a lot. It offers a wide variety cabins styles and prices (so people on a budget can stay on one while those who want to splurge on minisuites and balconies and the like can do that too). There are dining rooms with traditional seating—if you want to have your own tables every night—as well as more flexible options. The kids' program is terrific, ship features are fun—from spas to on some vessels the fabulous Movies Under the Stars outdoor cinemas. It's a line that really balances well in terms of appeal to a wide variety of travelers, from seniors to children.

I definitely recommend taking this to a travel agent—let them deal with getting deposits and final payments and such. And ask them about cruise line policies on freebies: most lines will give you one free fare for every 10-20 berths booked (varies between lines).

Once you figure out which line would work, I think you should settle first and foremost on your itinerary—and determine the home port that works best. If your group is a blend of eastern and western folks, you might even consider departing from Galveston (Houston).

When I pick a cruise category such as ocean view and it says "to be assigned" does that mean I will probably end up with an obstructed view or a less desirable cabin by an elevator or over a noisy area? Noisy area? Possibly. Obstructed view? Not if you purchased a full-on windowed cabin. The guarantee concept is really confusing to a lot of people. Basically what it means is that you opt to book a certain type of cabin but don't get to pick where it is (typically when you book a cruise you'll be told your cabin # immediately and can often request port or starboard, mid-ship or aft).

So you get a price break for booking a guarantee. The guarantee is you'll get at least the cabin you paid for at a discount (because you might wind up underneath the all-night Lido buffet). You might—and this is what our readers love about the guarantee—get a better category. It's a toss of the dice...and it's a risk. If you're picky better to just book the regular way.

What cruise would you recommend to Antarctica which isn't on an adventure or "Russian freighter" type ship? It's important to note that a handful of mainstream lines, such as Holland America and Princess, do include Antarctica on some S. America itineraries but they do not actually call at places there. They just ride around so you can see what it looks like. Is that what you're looking for? Otherwise, you're pretty much restricted to adventure-oriented ships.

We featured a trip to Antarctica virtual story last year on a Lindblad ship—one of the top eco-adventure companies—and it sounded magnificent. Otherwise, just look for ships that offer some glimpses of Antarctica...

Which cruise lines allow smoking and which ones have no-smoking policies? Royal Caribbean has banned smoking in cabins. But you can still light up on the balcony.

Celebrity is adopting a no smoking in cabins policy beginning this October. On Oceania Cruises, a mid-size ship line that falls just short of being luxury, smoking is only permitted in two small areas on each of the line's three ships. From October 2008, P&O Cruises will make three ships in its fleet—Artemis, Oceana and Ventura—completely smoke-free in inside spaces, with lighting up limited to some outside areas and on cabin balconies.

The lines to avoid for smoke-related reasons? Carnival, NCL and Princess—three of the biggest.