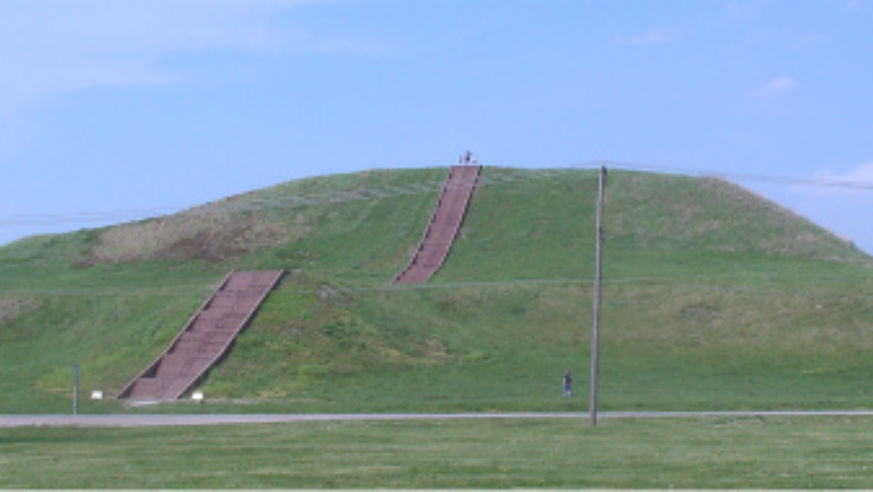 A 1,000-year-old Native American settlement that had been dismissed as a tiny encampment turns out to have been a surprising city near present-day St. Louis, Mo.

A report in the latest journal of Science reveals that the settlement, called Cahokia by today's archaeologists, stretched for eight miles on either side of the Mississippi River by East St. Louis, and may have had more than 500 rectangular houses and more than 10,000 residents at its peak.

The discoveries of a large number of artifacts and ruined buildings were made during the construction of a bridge that will connect St. Louis and southwestern Illinois.

If the findings are true, Cahokia would be North America’s first city, the largest of Native American communities north of the U.S.-Mexico border. The town thrived from 1000 to 1500 AD and was distinguished by “massive monumental mounds of dirt and ceremonial plazas,” according to researchers.

The area’s settlements are being described as America's one of the Native Americans’ most notable legacies. The Osage Nation is the Native American group believed to have the closest possible ancestral link to Cahokia’s founders.

Cahokia is an archeological find that’s been on third base for a long time and just needed to score. While the excavation site remains off limits to visitors, you can get a sense of the scope of the former city by visiting its better known nearby site, the Monks Mound at Cahokia Mounds State Historic Site near Collinsville, Il. This 2,000-acre park is a designated National Historic Landmark and a World Heritage Site.

Climb 156 steps to the 14-acre plateau and you'll see how the mound was built probably for ceremonies. Take in the view of nearby bluffs, which may shake the spare change out of your pockets with its beauty.

Back at ground level, a visitor's center provides a historical context for what once stood on the spot. The idea that Native Americans built a city will challenge the preconceptions of some people, whose ideas were shaped by 1950s Westerns. cahokiamounds.org; no admission fee but a suggested donation of $4 for adults and $2 for children

Meet the Moai of Easter Island