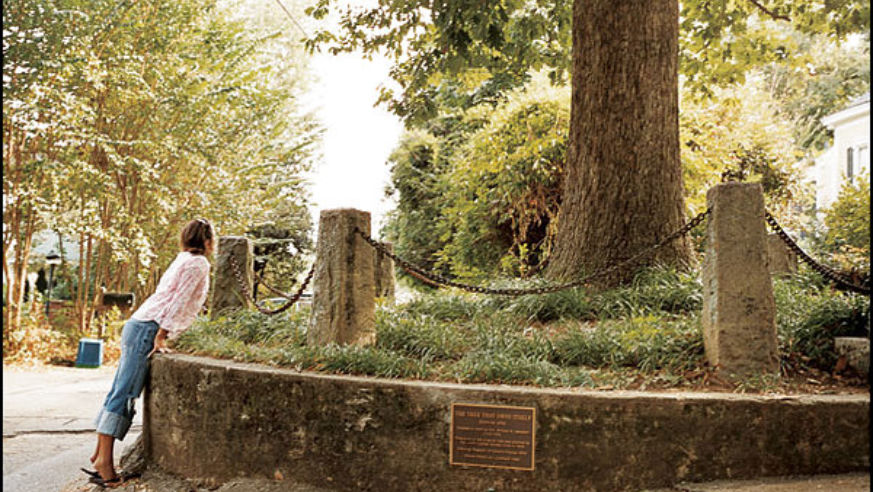 The Tree That Owns Itself

When Michael Stipe wrote "Shiny Happy People," the R.E.M. front man, a former University of Georgia art student, must have had Athens in mind. The 100,000 residents have a number of reasons to smile:

Athens is the southern seat of independent music, with R.E.M. playing the part of local boys made huge. It all started in 1979 at Wuxtry Records, where Stipe was a regular and Peter Buck a clerk (197 E. Clayton St., 706/369-9428). They then picked up their other two bandmates, also UGA students, in Athens. R.E.M., the B-52's, and Widespread Panic all played the 40 Watt Club early on in their careers. The club has changed locations a few times; the latest venue, where Sufjan Stevens recently performed, has a tiki bar (285 W. Washington St., 706/549-7871, 40watt.com).

A bulldawg with spirit

Sanford Stadium--despite its 92,746 capacity--sells out well in advance for big football games (877/542-1231, georgiadogs.com). Scoring a ticket is tough without an alumni connection, though it's not impossible; scalpers usually hang around outside. The university's athletic teams are known as the Georgia Bulldogs, and locals twang it out slowly and proudly, spelling it "dawg" on T-shirts. The school mascot, Uga VI, is the latest in a line of English bulldogs. Uga and his ancestors have gained national renown as the stars of a 2004 "dogumentary" called Damn Good Dog, which chronicles 48 years of beloved Ugas--trotted out at the beginning of each game--and the Savannah family that has cared for them. (It's pronounced uh-guh, by the way.)

The signature drink at the Manhattan Cafe, a cool dive downtown, is Maker's Mark and Blenheim's spicy ginger ale (337 North Hull St., 706/369-9767). On occasion, aspiring rock stars, emboldened by one too many, play the room.

Food for the people

Dexter Weaver has been behind the counter at Weaver D's, a soul-food restaurant east of downtown on the North Oconee River, for 19 years (1016 E. Broad St., 706/353-7797). Weaver is marvelously predictable. After he takes an order for plates of fried chicken, mac and cheese, or warm apple cobbler (platter with two sides $8), his favorite thing to say is "Automatic for the people." The phrase--a promise for quick service--went national when R.E.M. got Weaver's permission to use it as the title of the band's 1992 album.

A white oak on Finley and Dearing streets is known as the Tree That Owns Itself. In 1832, the professor who owned the land deeded the tree--and some land around it--to the tree. When the oak was uprooted in 1942, the Junior Ladies' Garden Club planted its replacement, which the nice ladies continue to keep well-watered today.

Grand Oaks Manor B&B, five miles outside of town, is an impressive 1820 antebellum mansion on a 34-acre estate (6295 Jefferson Rd., 706/353-2200, grandoaksmanor.com, from $129). The full breakfast, included in the nightly rate, regularly features caramel apple French toast and is served in proper southern style--on china, of course.