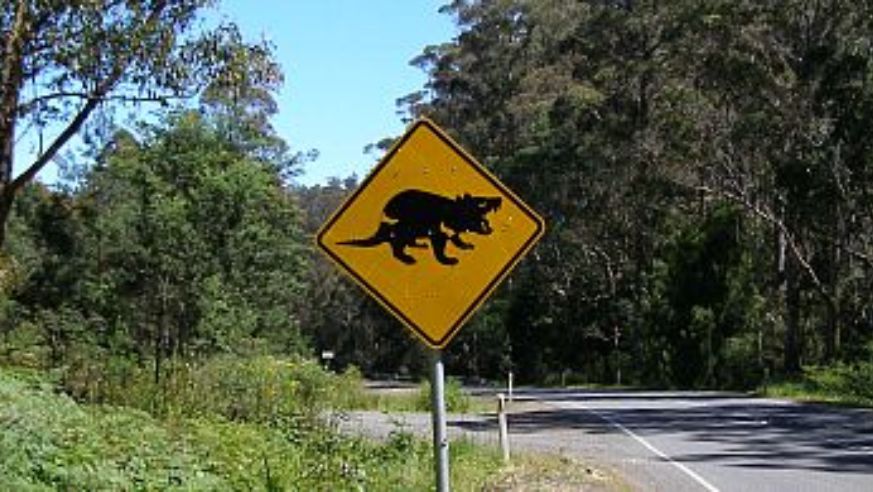 A car trip in Australia has its challenges including the fact driving is on the left. Distractions include a large number of weird wildlife warning signs on roadways.

The Australians just assume you can recognize the black outline of the animal or bird on the yellow signs. There's no verbiage, but the point is to avoid hitting the creature with your car, not to get a nature lesson.

Nowhere did my companion and I find the animal warning signs weirder—nor the amount of roadkill more plentiful—than in Tasmania, Australia's offshore state.

In our rental car we drove from Hobart for the day to the 19th–century penal colony in Port Arthur, a UNESCO World Heritage site, passing all kinds of signs and squashed creatures along the way.

We recognized the signs for one frightening looking creature as being the Tasmanian Devil—although on the signs it looks nothing like the cartoon version. The carnivorous marsupial is endangered due to a facial tumor disease, but some 3,000 are also killed on roadways each year.

We don't meet any devils, thankfully. We do pass by deceased brushtail possums and a large hawk feasting on something unidentifiable—coincidently near the isthmus called Eaglehawk Neck.

Signs also alert us to be on the lookout for penguins, wallabys and platypus. We later learn there are plenty of other creatures that wander onto Tasmania's roadways too including chubby wombats and such small marsupials as the pademelon, rat–faced bettong and pink–nosed bandicoot.

Tasmania probably should win some kind of award for its number of roadway animal warning signs.

The "Tassies" are very aware of the road–kill issue. There is even a RoadkillTas website, with government agencies among the sponsors. The site maps out what creatures drivers should watch out for—and where—and notes that some 300,000 Tasmanian animals fall victim to cars each year.

The Tasmania parks department notes on its website that tourists often get "distressed" at the amount of road–kill they see and explains most of the animals are nocturnal and get hit at night.

The warning signs are posted where the animals tend to cross the road…and that's no joke.

How to See the Best of Australia on a Budget