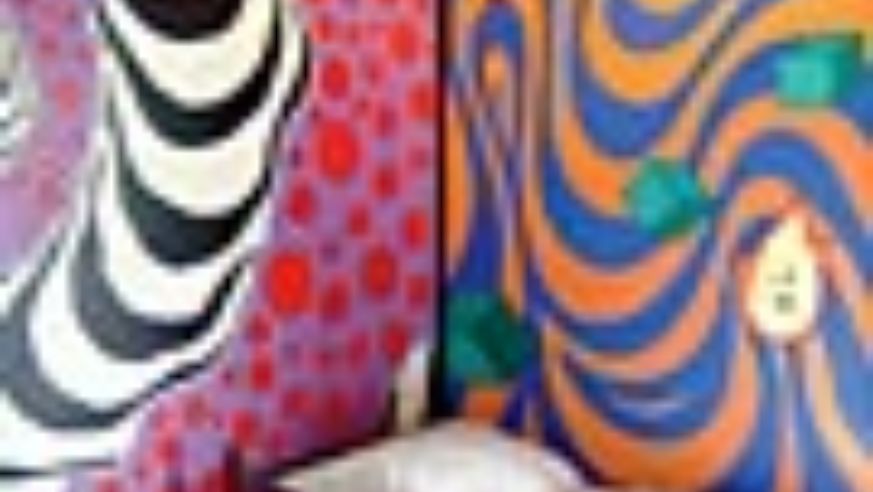 Artists and other creative types are having their way with hotel rooms&mdash;and they're thinking way outside the box.

Amsterdam
The Winston
Located in the red-light district on the oldest street in Amsterdam, the Winston, now owned by the English hotel group St. Christopher's, has quite a past. The previous owner, the late Frans Verlinden, cultivated a bohemian atmosphere in the 1980s and '90s, with "hookers, journalists, filmmakers, but most of all, artists" as frequent guests, explains manager Donald Kauwoh. Verlinden spearheaded the art-hotel trend and hired artist Aldert Mantje to select colleagues to decorate rooms and install temporary exhibits. While it started out being fairly avant-garde--guests may have encountered dead leaves and even, possibly, an animal corpse on display--the hotel has mellowed somewhat in recent years.

Notable Rooms: The anime-inspired Playnation room, by Adriaan Koster and Menno Schenk, sports psychedelic swirls and patterns on the walls, a Pac-Man-like maze on the ceiling, and a giant 3-D gold robot in the corner. Madelein de Bruijn, meanwhile, envisioned the Energy room as a life-size circuit board: Flow lines track a course along the yellow walls, and there's a lightning-bolt hazard sign on the door. Warmoesstraat 129, 011-31/20-623-1380, winston.nl, from $95.

Singapore
The New Majestic
When hotelier Loh Lik Peng renovated a hotel built from four Chinatown shophouses in 2006, he collaborated with the Asian Art Options collective to find artists to paint murals in all 30 rooms.

Berlin
Arte Luise Kunsthotel
After the fall of the Berlin Wall, artists camped out in a neoclassical building in the Mitte district of East Berlin until it evolved into a hotel in 1999. Dozens of artists, mainly German, decorated the rooms. There are now 50 total: A glass-and-concrete addition with nine new rooms opened in 2003.

Notable Rooms: Dieter Mammel placed an oversize oak bed in Mammel's Dream, so guests could reexperience a child's perspective. Thomas Baumgärtel went bananas in the Royal Suite. Andreas Paeslack turned Room 300 into a 3-D version of Poor Poet, a painting of a rustic room by 19th-century artist Carl Spitzweg. In a postmodern wink, Paeslack even depicted spectators on one wall. Luisenstrasse 19, 011-49/30-28-4480, luise-berlin.com, from $197.

Cape Town, South Africa
Daddy Long Legs
The poets, artists, and musicians behind Daddy Long Legs encourage guests to interact with the decor. Kim Stern's Please Do Not Disturb, for instance, has six microphones--including one in the shower--so you can amplify your singing. The neighbors won't mind: The hotel is above a music store.

Notable Rooms: Poet Finuala Dowling stocked the Palimpset room with South African literature in which she underlined favorite passages; guests can add their own marginalia. Bert Pepler's Emergency Room imagines a hospital room in red, with medical supplies as decoration. One of the hotel's more amusing rooms is Andre Vorster's You Are Here. 134 Long St., 011-27/21-422-3074, daddylonglegs.co.za, from $69.

Nice, France
The Windsor
Inspired by a 1987 Belgian exhibition of artist-decorated rooms, Bernard Redolfi commissioned one artist a year to transform one of the Windsor's rooms. The hotel is now owned by his niece Odile Payen-Redolfi, who continues the tradition. So far, 25 of the 57 rooms have received the treatment.

Notable Rooms: French photographer Raymond Hains lived in Room 40 for three years; when he left in 1995, he installed a portrait of himself taken there, amid his clutter. In Room 65, Ben Vautier spray painted phrases in French (such as "I dreamed that I fell in love with the stranger in Room 17") in red, yellow, and blue on the walls. Claudio Parmiggiani resized Room 57 from a standard rectangle into a cube, put a white underlit bed in the center, and covered the walls and ceiling with gold leaf. 11 rue Dalpozzo, 011-33/4-93-88-59-35, hotelwindsornice.com, from $132.

Toronto
The Gladstone
Born into respectability as a boarding house run by a widow with 13 children, the 1889 Parkdale landmark eventually slid into poverty. Six years ago, the Zeidler family, including architect Eberhard and his daughter Christina, bought the building and renovated it. They kept the Victorian plaster moldings and wooden floors, but not much else. Christina, a film-and-video artist in her own right, commissioned local talents to design the 37 rooms, added film screenings, and set up temporary art exhibitions in the hallways.

Notable Rooms: In Faux Naturelle, Allyson Mitchell created a psychedelic fake-fur tapestry featuring nymphs. Snapshot, by Christina, plays with the idea of a forest growing out of furniture: A larger-than-life print of a nearby park aflame with autumn leaves is mounted above the headboard in a Plexi­glas frame and folded like an accordion. 1214 Queen St. W., 800/531-4635, gladstonehotel.com, from $185.

Copenhagen
Hotel Fox
In 2005, Volkswagen hired marketing firm Eventlabs to redo Copenhagen's Park Hotel for the launch of the car company's Fox model. Eventlabs held a contest to select not only the artists who would create the rooms, but also the hotel staff. Many of the winning concepts were from international creative firms whose designs mix slickness (honed through their work for Nike and MTV) with the aesthetics of graffiti and graphic novels.

Notable Rooms: Sleep Seasons, by Australian firm Rinzen, has a tent with a mattress inside; murals of the four seasons are on the walls. Monday (pictured), by Norwegian illustrator Kim Hiorthøy, isn't one for obsessive-compulsives. Jarmers Plads 3, 011-45/33-95-77-55, hotelfox.dk, from $217.

Paris
Hotel Amour
In 2006, graffiti artist and nightclub impresario André Saraiva--a.k.a. M. André--teamed up with businessmen Thierry Costes and Emmanuel Delavenne to open Hotel Amour, a 20-room hotel in the once-seedy Pigalle neighborhood. André enlisted his art-world friends, such as fashion photographer Terry Richardson, to design rooms that eschew televisions, minibars, and even phones--but they do have bedside iPod docks and Kiehl's products in the bathrooms.

Notable Rooms: Alexandre de Betak, the creative force behind Victoria's Secret fashion shows, designed Room 401 with a runway vibe: The 200 disco balls hanging from the ceiling make everything sparkle. Room 405, by M. André himself, boasts a floor-to-ceiling shelf of his line of (occasionally risqué) toys and figurines. 8 rue Navarin, 011-33/1-48-78-31-80, hotelamour.com, from $190.

San Francisco
Hotel des Arts
Manager Hero Nakatani hired local gallery owner John Doffing to curate Hotel des Arts' first exhibition in 2004 and then had Doffing find artists ranging from graffiti taggers to professional illustrators to redesign half of the hotel's 51 rooms; other curators took over from there. Paintings by emerging artists are exhibited in the hallways.

Notable Rooms: Jet Martinez was inspired by the imagery and colors of his native Mexico when he painted a modern fairy story--with a glittering moon and a silver- and gold-leaf forest full of frogs and flowers--on the walls of Room 208. In Room 411, by Dave Kinsey, a man's head and torso cover an entire corner, and tribal graphics are drawn on bedside tables and next to door locks. 447 Bush St., 800/956-4322, sfhoteldesarts.com, from $99.