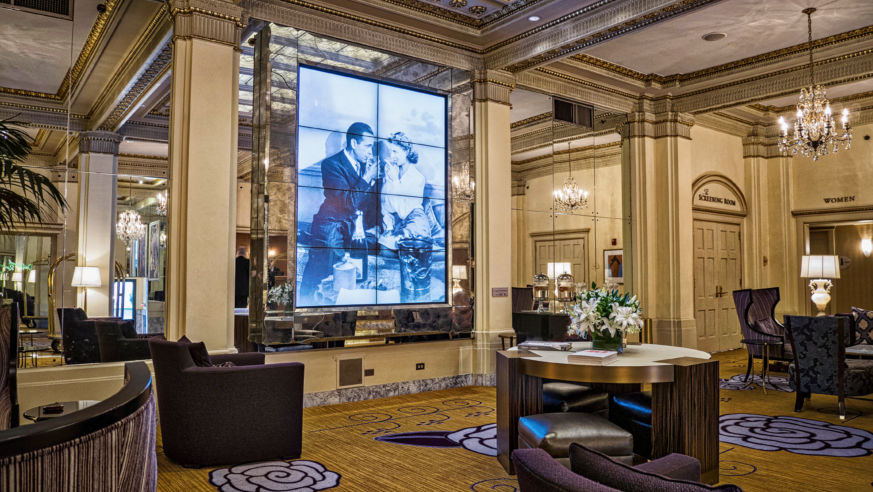 A beacon of old-world glamour stands as a tribute to Hollywood, Pacific Northwest–style.

If the name doesn’t tip you off to the hotel’s ambiance, consider that the Czech chandeliers that dominate the lobby are masterpieces from the 1960s. Consider also that the property was inspired by the Golden Age elegance of Hollywood. But this standout in the heart of Portland is luxury without pretension, or the hoity-toity price tag. Opened in 1912 as the glamorous Mallory Hotel, it underwent a $20 million renovation in 2005, re-opening as Hotel deLuxe, an homage to the opulence and elegance captured in the classic films of the 1950s and 1960s.

The Mallory was a longtime institution and the go-to accommodation for any member of American high-society that came to town. As such, it aimed to impress. It was the first hotel in the city to install air conditioners in each room and, later on, the first in Portland to offer Wi-Fi. In 2004, it was purchased by an art collector and devoted patron of the city’s institutions, who kept the décor relatively unchanged—including the original letterbox next to the elevator, a classy mailbox by any standard—as a salute to the hotel’s heyday.

That heyday is largely defined by Hollywood, which explains the 400 photos—film stills and studio shots—adorning the corridors. Each of the eight floors is devoted to a thematic group of silver-screen greats, to wit: the Dance and Music Masters (Gene Kelly, Ginger Rogers, Fred Astaire), the Masters (Frank Capra, Billy Wilder, and George Cukor), and so on.

The spacious rooms also nod to the era, with Art Deco–style crystal lamps and leather accents. Of course, there’s no nostalgia in the tech department. Each room features a flat-screen TV, Wi-Fi, and a clever “Make It So” button on the phone that connects you to the front desk for all requests—even creative ones, within reason. There's a Spotify Menu, a Spiritual Menu offering books, beyond the bible, that are central to a variety of religions, and a Pillow Menu, which is exactly what it sounds like. Want memory foam? Full body? Soft? Just ask.

The honor bar shines a spotlight on locally made treats, many designed to take home as souvenirs, like tins of sea salt from Jacobsen Salt, honey from Bee Local, olive oil from Red Ridge Farms, and Kettle Chips made in Oregon. Make sure to try a nip of Portland-produced Burnside Bourbon for a nightcap.

If you’re looking for convenience, this is as good as it gets. Situated in Portland’s West End, the hotel is walking distance from the downtown shopping district, which is chock-full of bars and restaurants, but the adjacent Providence Park, a sprawling sports facility that hosts Portland State football, Major League Soccer, and various community events, separates it from the hustle and bustle. It’s also on the light-rail line, which has direct service to Portland International Airport.

The hotel has an exclusive partnership with Salt and Straw, a local ice cream company known for its creative handmade flavors. There are scoop shops throughout the city and all over the west coast, but no need to run out for a cone—the deLuxe will deliver a pint to your room.

As far as dining, Gracie's, an elegant, cheery eatery specializing in modern food with local ingredients, is open for breakfast and lunch Monday through Friday, and there are dinner hours on the weekend. The Art Deco–accented Driftwood Room, which looks much the way it did when it opened in the 1950s, draws a local crowd for its excellent spirits selection and classic cocktails.

One of the city's best-kept secrets is Pop Up Cinema (hoteldeluxeportland.com/signature-events), which happens about twice a month on a giant screen in the hotel lobby. They mostly screen classic flicks, as befits the ambiance, but every so often you can catch a newer movie.