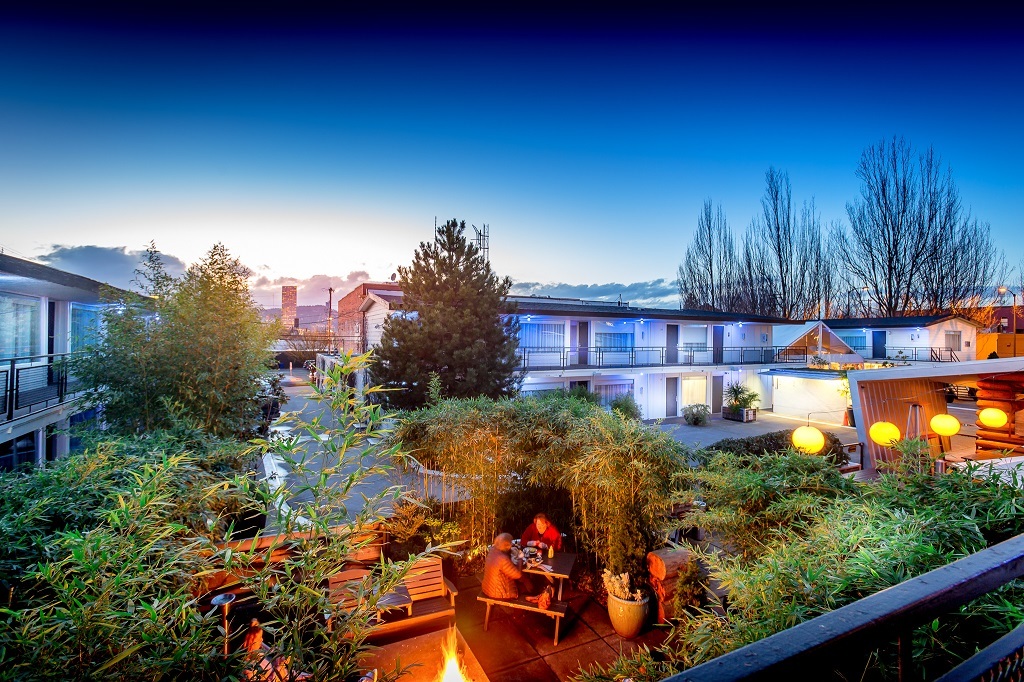 Log cabins are to the Pacific Northwest what skyscrapers are to Manhattan and adobe houses are to Arizona, but if you think a hotel in the center of Portland, Oregon, is gonna offer classic log-cabin lodgings, think again. The city known for its creativity and eccentricity has accommodations that are true to form, and Jupiter Hotel is perhaps the most representative of Portland's originality and zany energy.

Originally opened in 1964 as a motor lodge, the building was bought in 2004 and spruced up in a style that hints at a log cabin motif but also flies in the face of it, thanks to rooms appointed with creative, modern furniture. With all the rooms' entrances lined up along outdoor corridors, it has a distinctive retro charm, but that's where the vintage element ends. The sweeping, airy window-lined lobby doubles as a 24-hour gallery, with works by local artists changing every two months. If your visit falls on a first Friday of the month, partake in the neighborhood's art walk-around, when the hotel and many other nearby venues offer free wine and bites.

In standard Portland fashion, creativity reigns supreme. The rooms have an underlying Scandinavian minimalism about them, all clean lines and bright colors down to the turquoise remote control, but a Pop Art vibrancy ensures that a stay here is an engaging affair. For instance, giant chalkboards hang from the doors, with signs encouraging you scribble a masterpiece and post a shot of it on Instagram. Just don't forget to tag it: #jupiterhotel.

Sleep options include one bed and two, and each of the 81 rooms is adorned with its own unique, colorful mural. And in a cute nod to Portland's all-inclusive attitude, there's a copy of The Four Agreements: A Practical Guide To Personal Freedom, a treatise on creativity and happiness based on ancient wisdom, in the bedside nightstand's drawer.

The hotel is located in what's locally known as LoBu (shorthand for Lower Burnside) and more technically referred to as Central Eastside. It's something of a destination for foodie types, as it's home to the celebrated Le Pigeon, which offers French-minded fancy food in a decidedly informal setting. It's the flagship restaurant from two-time James Beard Award-winner Gabriel Rucker, who opened Canard, an equally French-inspired cafe-style eatery, right next door to Le Pigeon in April. The Jupiter's sister property, Jupiter NEXT, which opened in June, features Hey Love, a casual all-day/late-night restaurant/bar/lounge specializing in warm-weather-inspired food. And for quick convenience, Plaid Pantry is just three blocks away. Vintage shops and a handful of design-minded businesses also keep the neighborhood buzzing.

The hotel doesn't have its own eatery, but it sits adjacent to Doug Fir Lounge, a bar/restaurant/music-venue hybrid that's open from 7:00 a.m. until "late," with a 3:00 p.m. happy hour in between and live music every night in the downstairs performance space. (Concerts are ticketed.) The restaurant dishes out elevated pub fare made with seasonal ingredients as well as craft beer and cocktails. Call in an order for takeout and relax in your room, or stick around and mingle with locals, as it's a popular hangout with a lively patio scene. It's worth noting that there's a delightfully stylish, slightly kitschy log-cabin-meets-lounge look to the place. Expansive logs make up the bar-top, the walls and even some of the furniture.

Of the hotel's 81 rooms situated in several sprawling buildings, 41 are located on the "chill side," out of earshot of Doug Fir's many patio revelers. Those rooms fetch a slightly higher rate than the bar-side rooms, so be sure to note your preference when making reservations. Also, to help you feel like a local during your stay, you can rent one of the hotel's bicycles and see the city on two wheels, alongside the many, many other urban bikers occupying the streets. Rates are $35 per day or $10 an hour. 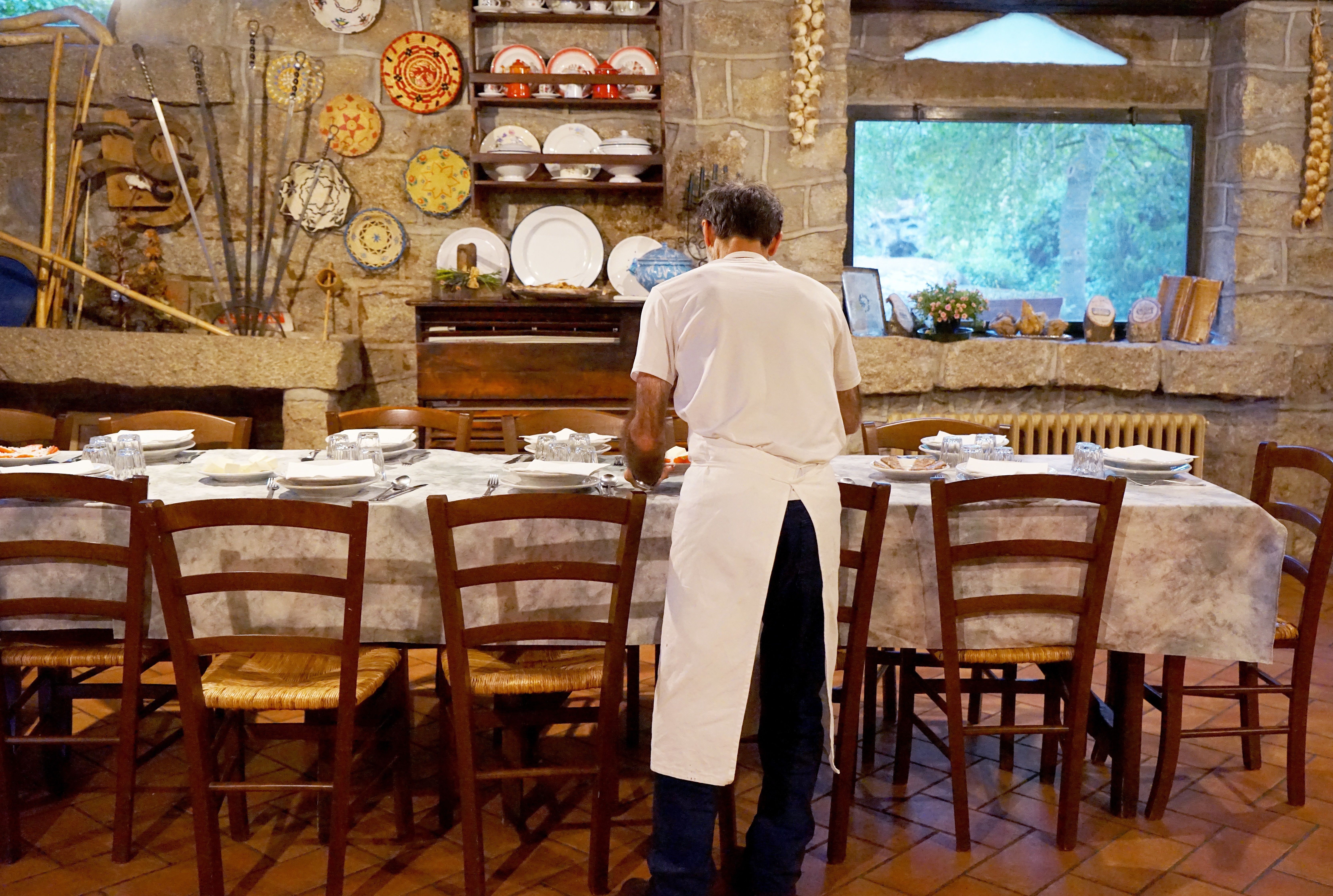 #BTReads: ‘Eating My Way Through Italy’

Say the word travel. If the first image that comes to mind is a table exquisitely set with heaping bowls of pasta, bottles of wine, and, ideally, a field of cornflowers in the distance, then Elizabeth Minchilli’s Eating My Way Through Italy: Heading Off the Main Roads to Discover the Hidden Treasures of the Italian Table may be the book you’ve been waiting for all your life. ENJOY AN ENTHRALLING FOOD MEMOIR - PLUS RECIPES! (Ermess/Dreamstime) Elizabeth Minchilli is perhaps the only food writer working today who could have pulled off this miraculous hybrid, a book that belongs in your carry-on the next time you fly to Italy, and on your kitchen shelf the next time you want to whip up an authentic taste of, say, Umbria (you must try the white bean soup recipe in the chapter on olive oil). Because Minchilli has spent decades studying, celebrating, and writing about the food cultures of the Italian peninsula, most recently in her masterful memoir-cookbook Eating Rome: Living the Good Life in the Eternal City, and on her website elizabethminchilli.com and bestselling app Eat Italy, she brings a depth of experience, wit, and contagious enthusiasm to each chapter. Open Eating My Way Through Italy to any page and dive into an anecdote, recipe, or travel suggestion and you know you are in the hands of a writer who starts with your best interest at heart, a writer who wants to educate you even as she enthralls you, and, in a media world increasingly dominated by food writers who seek to amass an audience before they actually have anything remotely interesting to say, a writer who knows her subject so deeply and brings such love to her work, you simply can’t stop reading. TRAVEL ACROSS ITALY IN 289 PAGES (Giuseppemasci/Dreamstime) I confess, I tend to read travel and food books (and hybrids like this one) with an eye toward my favorite destinations or foods, so I went straight to “A Crash Course in Parmigiano Reggiano,” in which Minchilli sorts out the rules under which the cheese is made, plus tips for how to buy the best and use it well. Spoiler alert: Never, ever, buy cheese labeled “parmesan.” For more, you’ll have to read the book. From Parmigiano, I moved right to “A Sense of Place and a Bowl of Farinata,” which not only delves deeply into the Tuscan polenta-beans-and-kale recipe but also divulges locals-only secrets of my favorite Italian city, Florence, from the point of view of a lifelong Roman (Minchilli lives in a rooftop apartment in Rome), which, frankly, is a little bit like a native New Yorker explaining how much they’ve genuinely come to appreciate Boston. (Toldiu74/Dreamstime) Basically, Eating My Way Through Italy allows you to drop in on Italy’s many culinary regions. We Americans often forget that what we think of as the country of “Italy” is a relatively new, 19th-century entity, and its centuries-old regions, from Emilia-Romagna in the north to the Mediterranean islands of Sicily and Sardinia, encompass a variety of flavors, terroir, dialects, architecture, and style that cannot possibly be reduced to a single adjective, no matter how alluring the word Italian may sound. With Eating Rome and Eating My Way Through Italy on our nightstands, kitchen counters, or in our carry-ons, Budget Travelers will always be just steps away from an authentic Italian feast. What a gift Elizabeth Minchilli has given us. 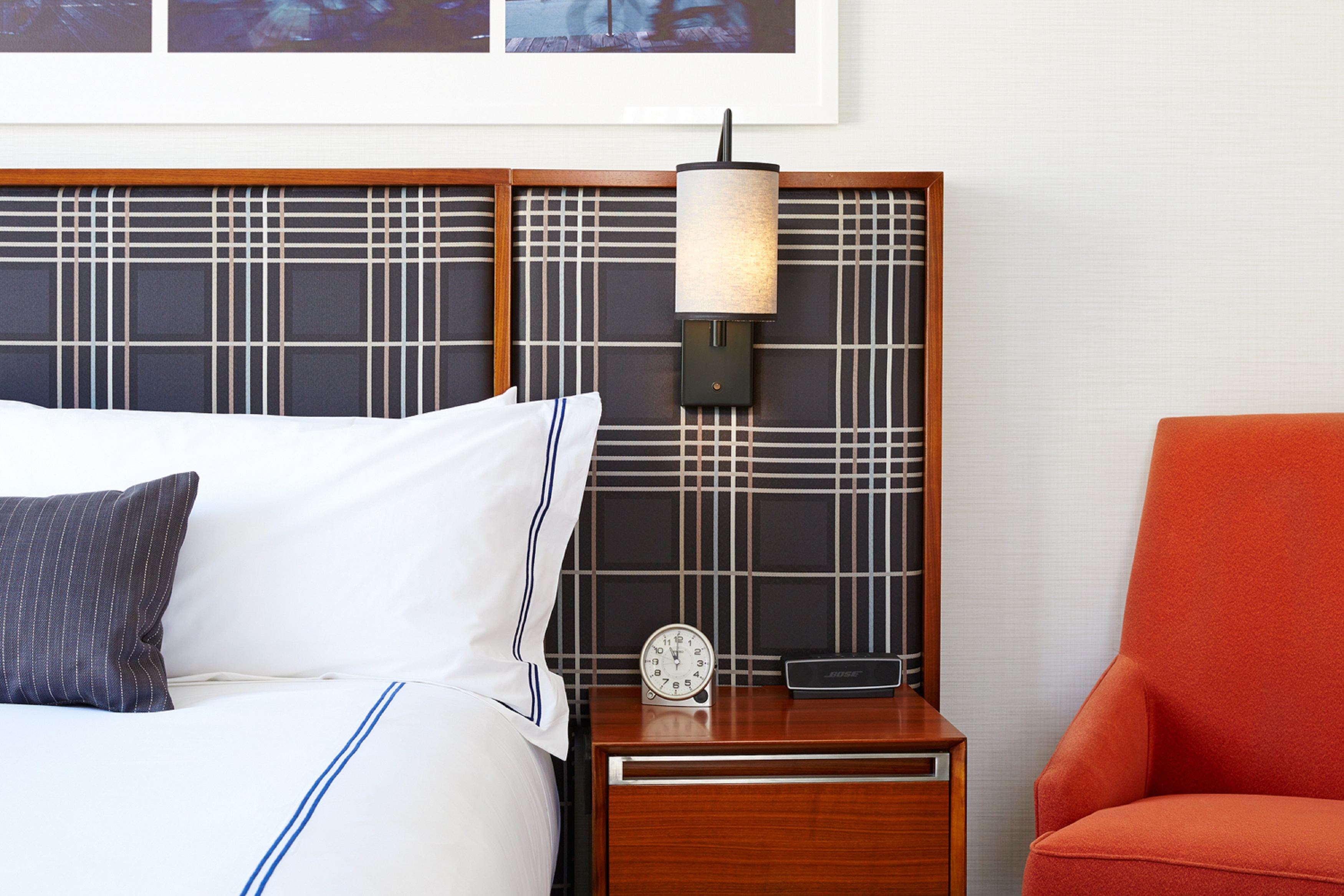 The Freedom Trail runs around and adjacent to hotel's Downtown Crossing, a centrally located maze of mostly retail-lined streets, but the district, just up the street from Chinatown and Emerson College, is anything but fusty. The old-world architectural details of many of the buildings are preserved, but otherwise it's a thoroughly modern shopping area with "ambassadors" lingering on the partly cobblestone streets to guide visitors and outdoor tables for loitering in warmer months. In other words, it's a welcoming area for tourists visiting the city who want to stay in luxury just steps from American history. THE STORY The Godfrey, a small national boutique hotel chain, has its flagship property in Chicago. Boston, which has 242 rooms and opened in 2016, is the second property. Others include Tampa and LA.) It's located in two thoughtfully combined and renovated 110-year-old buildings that are listed on the National Historic Registry. Having once housed corporate textile and fabric trade offices on the upper floors and retail outfits on street level, they're credited with having had a historical impact on the city's once lively commerce. THE QUARTERS Despite being located in a densely-packed urban center, the rooms, which are appointed in neutral shades of grey, beige, charcoal and green, with tartan headboards tossed in for good measure, get plenty of light thanks to floor-to-ceiling windows. Rooms range in size from a standard size to a slightly larger double queen (two beds) to a larger studio king, which features a pullout couch, to sprawling corner suites on the top floor. Mini-fridges are not set up in the standard rooms, but they're available upon request, a thoughtful way to cut down on energy, an underlying mission at the property. The hotel pulled out all the stops where technology is concerned. Each room has a 55-inch LCD televisions with smartphone-to-TV streaming capability for your own Netflix and Hulu accounts, Bluetooth-compatible Bose wireless speakers, and Keurig coffee makers. Spacious bathrooms have a luxurious feel, plenty of counter space, and neat design touches like deep basin sinks. High speed WiFi and bottled water are free. THE NEIGHBORHOOD Suffice it to say you can’t be more centrally located in Boston than Downtown Crossing, a mix of gorgeous historic buildings and lots of familiar stores. There’s a number of restaurants and pubs nearby, and Chinatown is a few blocks away, but it’s primarily a retail district, so it’s very quiet late at night. The hotel is walking distance from the sprawling Boston Common and a stone’s throw from all four subway lines. (They’re designated by color here: the Red Line, Green Line, Blue Line, and Orange Line.) THE FOOD The Godfrey is certainly not a big property by hotel standards, but when you hear about its varied eating and drinking options, you'd be forgiven for thinking otherwise. First things first: coffee. A George Howell Cafe is connected to the lobby. Howell's name may not be as familiar as Howard Schultz's but it should be. In the 1970s, long before Starbucks, Howell founded the Coffee Connection and pioneered the specialty coffee movement, even coming up with the Frappuccino, which he based on the frappe, a classic New England milkshake. The drink became part of Starbucks' repertoire when the company bought Coffee Connection in 1994. Today the cafe features a range of specialty drinks and locally made pastries and sandwiches. Baristas explain the nuanced flavors of different single estate beans. The dinner option is Ruka, a creative Japanese-Peruvian fusion spot that features creative dishes and drinks in a lively, colorfully appointed space. And for a nightcap--or afternoon tipple--the lobby bar, helmed by forward-thinking barmen, offers seasonal cocktails amid the marble columns of the high-ceilinged space, which has tall windows facing the buzzy street. Belly up to the marble bar or hunker down on one of the stylish chairs or couches. ALL THE REST There's a 24/7 fitness center, but the hotel offers other outdoor options for getting active, too. You can borrow a bicycle for free or tag along with the "running concierge," who'll lead you on a fast-paced tour through the Boston Common or along the harbor. RATES &amp; DEETS Starting at $199 The Godfrey Hotel 505 Washington StreetBoston, MA 02111 (617) 6494500 / thegodfreyboston.com 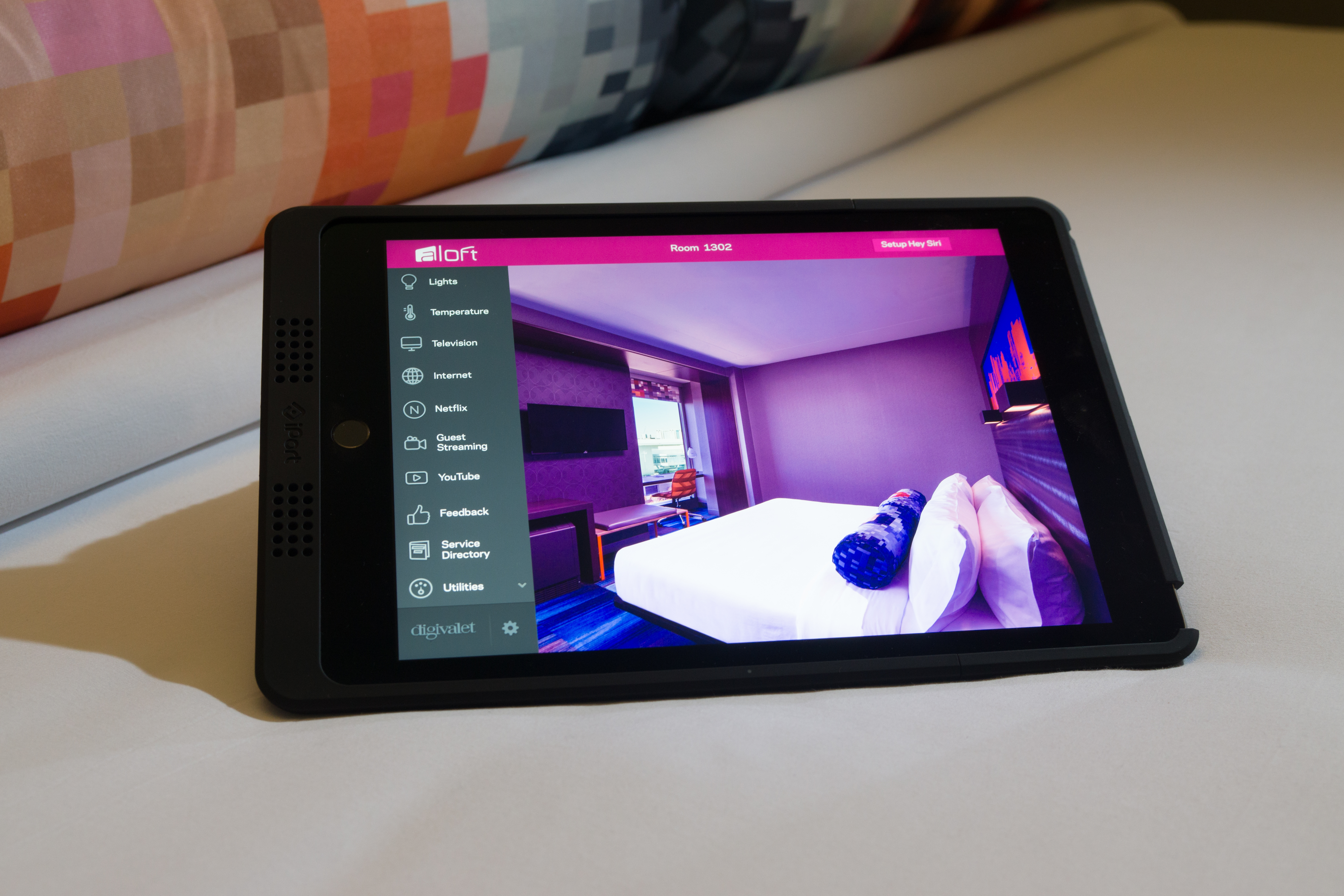