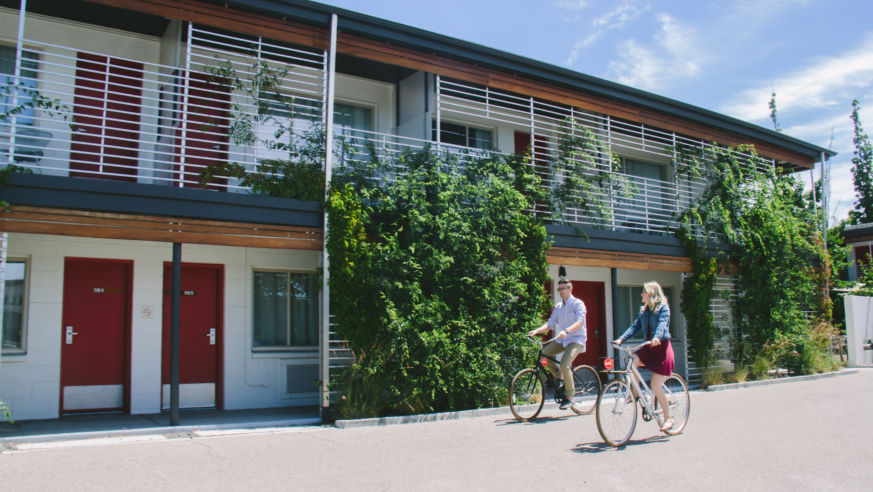 Art-obsessed accommodations in a revamped motel.

Over the last few years, Boise has become known as “Little Portland” for the independent-mindedness of its business owners, entrepreneurs, artists, and culinary types. Creative chefs prize local fare, stores feature items by local artisans and creators, and the JUMP Center, a massive sprawling incubator space opened by the Simplot family, known for their potato empire, sprawls at the edge of downtown. Though progressive, it cherishes its roots, its Basque traditions not least among them. In the 1930s is saw a wave of immigrants from the region and to this day it boasts the largest Basque population outside of Spain. The Modern Hotel and Bar taps into both the city’s lively, stylish vibe, but its origin is rooted in prized traditions.

The Modern, which is about a ten-minute walk from the heart of downtown Boise, opened in 2007. To hear owner Elizabeth Tullis tell it, the hotel business was, in a sense, her destiny. Her grandmother ran owned a boarding house in the 1930s after immigrating from Spain to Boise, which had –and continues to boast—the biggest Basque population outside of the region. Boarding houses dotted the city through the mid-1900s, as people would come from Basque country to do farming work for the season. These days, Boise boasts the biggest Basque population outside Europe.

The Hotel is an overhauled Travel Lodge, one of the early motel franchises. The long, low-rise building, is classic motel architecture, with roadside-facing room entrances opening to an outdoor corridor. Most of the second-floor rooms are located along an inside hallway.

The oversized, minimalist rooms are furnished with Midcentury Modern furniture, all sleek 1960s-style designs with crisp, clean lines. But that’s about all that’s throwback here. Each room features a large flatscreen TV (suites have two), and marble showers with both rain shower heads and a handheld. (Suites have a Japanese soaking tubs.) The suites feature a kitchen that’s compact yet complete, including cabinets and a full-size fridge. Mini fridges are available for the basic rooms on request. Elizabeth explains that not having refrigerators plugged in in every room curbs their carbon footprint. The minibar, features very rationally priced snacks and drinks (candy bars for $2.50, Pepperidge Farm cookies for $4.50, mineral water for $4), and toiletries like deodorant ($3) and a toothbrush kit ($5). There is no alcohol, and for good reason: if you don’t feel like going down to the bar for one of their exquisite cocktails, you can have it brought to your room.

In December, Elizabeth opened four fully-furnished and equipped extended-stay apartments across the way. There’s a studio, two one-bedrooms and one two-bedrooms, each of which is adorned with art from San Francisco-based Creativity Explored, a collective of mentally disabled artists.

The Modern sits in the Linen District, a six-block stretch on the edge of downtown that takes its name from the Linen Building, a former linen building for laundered that’s now an environmentally-minded event space. The once gritty blue-collar neighborhood is in the throes of a renaissance, so older businesses, like a basic liquor store, sit side by side with newer spots, like Big City Coffee, a vintage-accented café with homemade pastries and Eyes of the World, a cute boutique with antique-style jewelry, women's clothing, accessories, and sundry knickknacks. It’s also a stone’s throw from Woodland Empire Brewery, which features a relaxed tasting room and yoga classes in its sprawling space.

There’s a reason the Modern Hotel and Bar gives its eating establishment equal billing. On any given evening, you’re likely to find visitors from California or Denver or wherever at the bar swapping stories with friendly locals. The restaurant, helmed by a James Beard Award-nominated chef, focuses on classy yet casual creative renditions of familiar dishes that spotlight local, seasonal ingredients. The farms, dairies, bakeries, and roasteries they source from are listed on the menu. The bar is a destination for its inventive craft cocktails, the handiwork of France-born manager Remi Courcenet. Drinks are arranged in order of increasing body, so there’s no question that the Bedford, a gin drink fortified with apple shrub and bubbles, is a delightful aperitif to start the evening and a the rum-based, rosemary-crowned Frau Holle a soothing nightcap to indulge in before heading back to your quarters for some shut-eye.

The hotel is almost as focused on making sure guests are entertained and amused as they are comfy and nourished. The in-room film festival, 39 on 39, (Channel 39 in all 39 rooms, get it?) features a few dozen short films, from three minutes to 20 minutes, playing on a loop. Elizabeth homed in on short films because they’re easy to take in while you’re just, say, getting ready in the morning, plus there’s simply not enough outlets for talented short-film makers. They’re selected by the staff from submissions. The lineup changes each year.

But Elizabeth’s commitment to art extends far beyond film. She brought over Basque muralist Judas Arrieta. Known for vibrant murals throughout Europe, he covered the hotel’s sweeping back wall with an electric-colored, dynamic, engaging work that blends all kinds of social commentary, pulpy, kitschy images, and history of the West. Be sure to spend time taking in the details. And see if you can spot the portrait of Elizabeth’s grandmother.

And no discussion of The Modern would be complete without mentioning the record player on a gnome stool and the bin of '45s in the lobby bathroom. When they first opened, the bathroom became a hotspot to the point where there'd be a line in the lobby, Elizabeth says with a laugh.