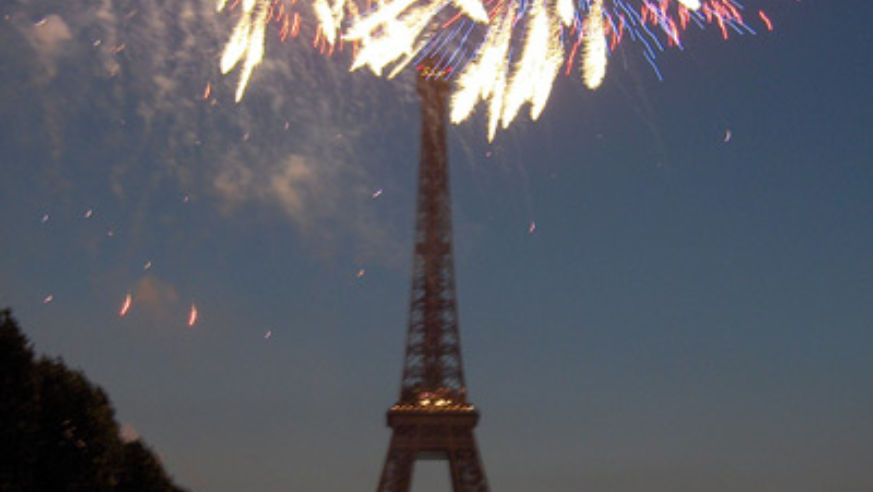 On July 14, 1789, a French mob overtook the Bastille, then a state prison that held political prisoners. The day has since become a symbol of the ideology of the French Revolution that followed. Below you'll find how to celebrate in Paris this weekend.

[But don't worry if you can't make it. We found the top 10 free events that are happening in Paris throughout July and August. We dish up the best offerings, such as hanging out on an artificial beach along the Seine and enjoying free outdoor jazz concerts. Click here to find 10 top free events in July and August.]

The Parade The annual Bastille Day défilé will kick off early at 9:00 a.m. with a parade of tanks and soldiers down the Champs-Elysées. The air above will be filled with jets—the impressive l'armée de l'Air—plus helicopters and parachutists. As this year's guest of honor is India, the parade will also include Indian military and musicians. A strange combination, indeed! Avenue de Champs-Elysées, 8th arrondissement.

The Fireworks The Eiffel Tower's 120th birthday is the occasion for a bigger-than-usual Bastille Day fireworks show. The same pyrotechnic posse that managed the Millennium explosions will be putting on this year's show with 30 video projectors, 120 flame throwers, and more than three tons of explosives. The fireworks are scheduled to begin at 10:45 p.m. Before the show, Johnny Hallyday (France's beloved aging rocker) will perform a free concert on the lawn. Massive crowds are expected. Champs de Mars, 7th arrondissement.

The Firemen Elsewhere, thousands will be celebrating their fraternité at the annual firemen's balls. I'm not sure about the origin of this tradition, but Bastille Day is, for many Parisians, the occasion to dance with sexy firemen. These parties are usually free (you'll be asked for a donation) and have DJs or live bands to provide a backdrop for the dancing. Some firehouses boast gymnastics shows, strip teases, and other amusements. By my count, there are more than 60 balls taking place in Paris and the near suburbs. Check here, for a full list in French, and here, for a short and lively list in English.

This weekend: Storm the Bastille… in Philly?!