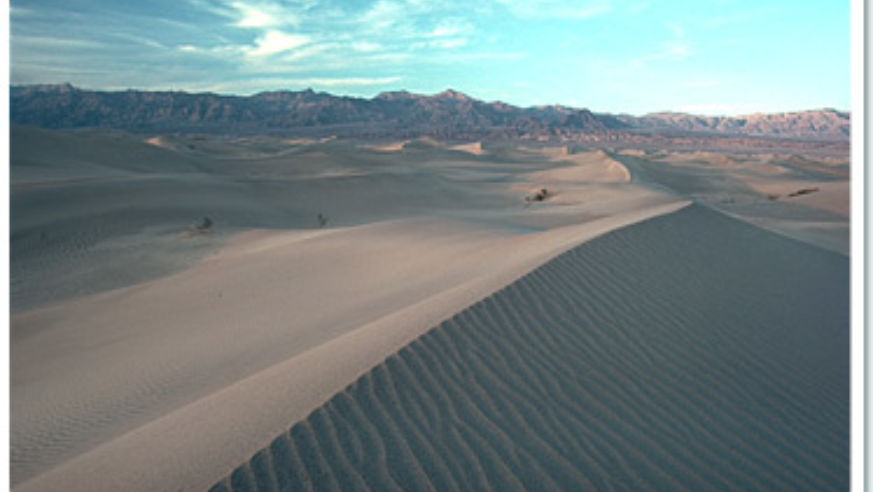 Explore the dramatic landscapes of Death Valley, Joshua Tree, and Saguaro in spring, without thousands of other tourists.

High season is February through early April in California's Death Valley, when wildflowers are in bloom and temperatures are relatively cool. But the entire point of Death Valley—among the lowest, hottest, and driest places on the planet—is to be a bit uncomfortable. In April, highs average 90 degrees, lows 62: Not relentless, but you'll definitely feel the heat, and nights offer relief. You could go in summer, when the mercury often hits 120, but the other point is isolation—and summer has become popular with tourists, particularly Europeans.

As desolate as it sounds, Death Valley is a fairly varied experience. There's geology: Badwater Basin, 282 feet below sea level, marks the lowest spot in the Western Hemisphere; Devil's Golf Course is a field of jagged salt crystals, said to audibly crack when the temperature changes; the dunes at Stovepipe Wells look like the shifting sands of the Sahara. There's history: Scotty's Castle is a house that wouldn't look out of place in Beverly Hills, with a strange backstory about an insurance magnate and a huckster; the Wildrose Charcoal Kilns are brick beehive ovens built in 1877 for making charcoal. There's mysticism: Playa Racetrack, an hour's drive down a rocky road, is a dry lake bed—the surface looks like cobblestones—where large rocks mysteriously move hither and yon, leaving long, deep tracks. The town of Shoshone has some offbeat charm: Whether you'll prefer the scruffy Crowbar Cafe & Saloon (Hwy. 127, 760/852-4123), or the new-age Cafe C'est Si Bon (Hwy. 127, 760/852-4307) depends on what kind of person you are.

March is peak season at Joshua Tree as well. For slightly smaller crowds, and the chance to catch the tail end of wildflowers in bloom, go a month later. The California park straddles the Mojave and Colorado deserts, and you're treated to three distinct landscapes: The northern high desert, with lunar-like rock formations and craggy Joshua tree forests; the southern low desert, with wide-open vistas and jagged peaks; and the transition zone, with features from both, as well as cholla cactus gardens and spidery ocotillo patches. There's nowhere to buy provisions inside the park, so the Crossroads Cafe and Tavern—which serves breakfasts such as Willy Boy Hash, with shredded steak, peppers, and onions over cheesy scrambled eggs—seems like an oasis (61715 29 Palms Hwy., 760/366-5414).

For an even less crowded desert, try Arizona's Saguaro National Park. In March and April the vegetation is lush (for the desert), and mule deer, coyotes, foxes, kangaroo rats, and javelinas (odd-looking pig-like creatures) are out foraging. There are more than 150 miles of hiking and horse trails. If you're scared of running into animals in the wild, or just want to learn more about the desert before hitting the trail, stop outside the park gate at the Arizona-Sonora Desert Museum (520/883-2702, desertmuseum.org, $13). "It's home to a great zoo," says park ranger Chip Littlefield. "You'll find every plant and animal native to the Sonoran Desert."

Bottoms Up! Because the air in the desert is so dry, you won't really notice that you're sweating. Even if you're not thirsty, force yourself to drink a lot of water, all day long--more if you're hiking.

Not Entirely Deserted of Culture
Death Valley has two unique attractions. Marta Becket moved to Death Valley Junction in 1967, and opened the Amargosa Opera House, where she has performed for more than 40 years. It's not opera, and it's not quite dance—though she does go en pointe—but it's certainly unforgettable (760/852-4441, amargosaoperahouse.com, $15). And near the ghost town of Rhyolite, Nev., is the free Goldwell Open Air Museum, showcasing sculptures in a variety of styles. The massive kneeling naked lady composed of pink cinder blocks--well, you just have to see it (702/870-9946, goldwellmuseum.org).