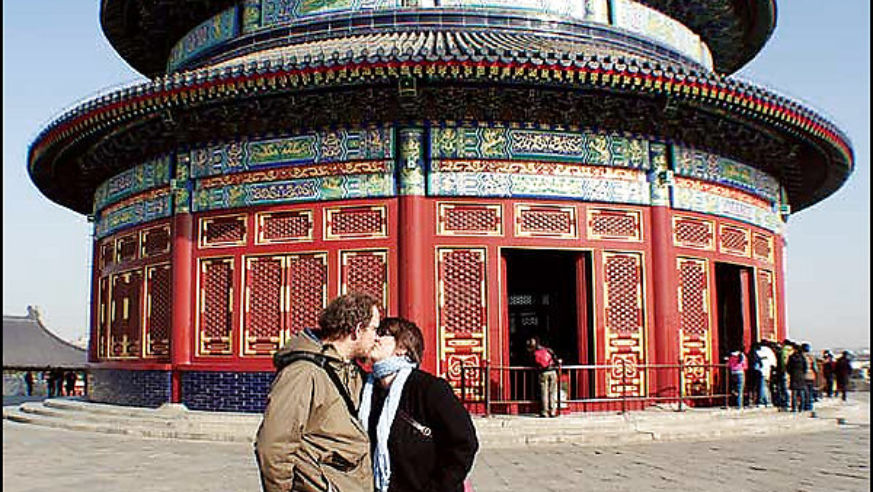 John and Amy at the Temple of Heaven park

How was your trip? Amy Bush and John Milton tell us about their trip to China.

So what was Beijing really like? John and Amy got to see a lot in four days, including Tiananmen Square, where they met a group of Chinese teenagers who were also sightseeing. "They approached us with a camera. I thought they were asking me to take their picture, but they wanted to pose with me," he says. "They told him he looked very cool," laughs Amy. "It must've been the beard!" John and Amy were both struck by the city's mix of ancient and modern. "The theme of this trip was contrast," says Amy. "For example, we spent one morning exploring the Bell and Drum Towers--my favorites. From there we walked down Dianmenwai toward Jingshan Park and past a temple built in the 600s. We then walked around Qianhai Lake and watched locals ice-skating. It felt like an experience we couldn't have had anywhere else until we happened upon a Starbucks. We ordered a grande sugar-free hazelnut nonfat cappuccino without any trouble!"

Did you find any unique souvenirs? "We always buy a trinket that'll remind of us of a trip," says Amy. "Near Portland, Ore., we bought a glass fish at the aquarium. In Yellowstone, it was a little buffalo. This time, we found a jade pig for $13 at Long Di Superior Jade Gallery, right next to the Ming Tombs (011-86/10-8971-7131). It seemed very appropriate because 2007 is the Year of the Pig."

Dining with monks: After a visit to Confucius Temple, John was thrilled to find the all-you-can-eat buffet at Deng Pin Su Shi Fu Vegetarian Restaurant (26 Guozijian Jie, 011-86/10-6404-6568). "I knew it had to be great because there were Buddhist monks dining in groups with regular folks. Later on, we noticed that the regular folks were paying, so this must have been a take-a-monk-to-dinner sort of thing. Anyway, I tried to get very small portions so I could try a lot of different things, but I probably only got through a quarter of the main dishes. Everything I tasted was wonderful!"

Haggling in the markets: Amy bought calligraphy brushes at half price. She worried she'd pushed too hard when the saleswoman scowled at the sale. "But as I was turning to leave, I said 'xiexie' [thanks]. She responded with a big smile and a 'xiexie.' "

Offthe beaten path: John liked the Sacred Way, a walkway that leads to the Ming Tombs near Badaling. "There are 36 statues," he explains. "Twelve are of people who served the emperor and 24 are of animals, each with a specific meaning. I took a lot of pictures there, mostly close-ups for black-and-white prints."