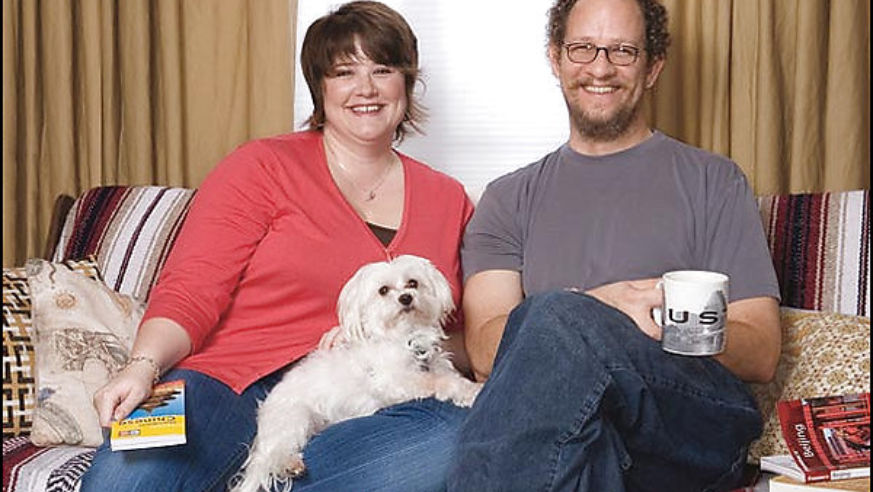 Austin, Tex., couple John Milton and Amy Bush are going to the capital of China for four days and want help navigating the city.

Who's Traveling
Amy Bush and John Milton of Austin, Tex. John is a computer systems analyst. "A super geek!" says Amy, laughing. "No, John is laid-back and goes with the flow." She's a career counselor at St. Edward's University, a small liberal arts school. "I'm more of a social butterfly. And I'll choose shopping over adventure any day." Also pictured is the couple's 8-year-old Maltese, Fisher.

Where They're Going
To celebrate her birthday and the couple's sixth anniversary, which are only a few weeks apart, John surprised Amy with a trip to Beijing. "I found the deal online," he says. "It was too good to pass up." The package from Gate 1 Travel included round-trip airfare from San Francisco and five nights' hotel for $699. John booked connecting flights from Austin through the tour operator, too: "Gate 1's prices were better than what I could find on my own." After taking Amy to get a passport photo and having her sign a covered-up visa application form, John finally spilled the beans a month before the trip, knowing they'd need time to research and plan. "It's so exciting," says Amy. "We'll cross the international date line and--poof!--I'll be 36."

How Can We Help?
Cab queries:"What's the best way to get around Beijing?" asks John. "I've read a lot about renegade taxis. How can we tell if a cab is legitimate?"

Finding their way: Amy doesn't think simple guidebook maps are really detailed enough. "Is there a specific map we should buy when we get to China?" she asks.

Money matters: John wonders about basics like ATMs and credit cards. "What do we need to know about getting cash?"

Decoding a menu: "Johnny doesn't eat red meat," says Amy. "Is that going to be a problem at a lot of restaurants?"

GreatWall advice: "A friend told us to go to the Simatai section of the wall, not Badaling," says John. "What's the difference?"

Winterfun: The couple plan to travel in late January. "Can you suggest some good cold-weather activities?" asks Amy.

The right sights: "We've only got four full days in Beijing, so we want to see highlights, not tourist traps," says John. "Other than the Great Wall and the Forbidden City, what are the must-see places?"

Pre-tripresearch: "I've already bought a bunch of city guides and a Chinese phrase book," says Amy. "Can you recommend a few books and movies that'll give us a broader perspective on China?"

Here's Our Advice
Getting and spending yuan: Credit cards are increasingly accepted at restaurants and markets, but John and Amy will want cash for taxis and incidentals. Most ATMs require a four-digit PIN. People who've converted their PIN to a word in order to remember it should memorize it as a number.

Haggling is commonplace in China. Intense negotiations--which may sound like angry shouting to the uninitiated--are often accompanied by facial expressions indicating displeasure. It's all part of the game. Buyers must be prepared to walk away if they're not offered a price they think is fair.

Gratuities aren't expected or necessary in China, though tipping a hotel porter or tour guide is a nice gesture.

Buying the right map: It's important to find a map that's labeled with both Chinese characters (which locals read) and pinyin, the Roman transliteration of those characters (which Westerners can pronounce). The Beijing Tourist Map is available at airport kiosks, at hotel gift shops, on newsstands, and at the Foreign Languages Bookstore in the Wangfujing shopping district (235 Wangfujing Dajie, 011-86/10-6512-6903, $1.50).

Transportation: Licensed taxis have meters and display a red sticker on the right rear passenger window listing the per-kilometer rate (1.20¥, 1.60¥, or 2¥, depending on the size of the car, after an initial charge of 10¥). If the driver doesn't turn on the meter, remind him by saying da biao (pronounced "dah beow"). Most drivers don't speak English, so point to your destination on a map or, better yet, ask a hotel concierge to write it out in Chinese characters on a piece of paper that you can then hand to the driver. It's also a good idea to carry a few hotel business cards so you can find your way home.

The subway is the easiest way to get around town. Stations are marked with a white capital D on a blue background ("subway" is ditie in pinyin). Most attractions are accessible on Lines 1 and 2. Regardless of how far you travel on those routes, the fare is a flat 40¢.

Peking duck andbeyond: When it comes to Beijing food, most visitors will want to try Peking duck and Mongolian hot pot. Quanjude Roast Duck Restaurant, founded in 1864, is one of the city's most celebrated Peking duck restaurants. There are six locations, but the most convenient is the original one, a five-minute walk south of Tiananmen Square (32 Qianmen Dajie, 011-86/10-6511-2418, from $22 for two).

Mongolian hot pot is like fondue, but with seasoned broth instead of cheese. Along with the requisite meat and veggies, customers have a choice of fish balls, noodles, and tofu for dipping. It's acceptable either to throw everything into the broth at once and pull it out with chopsticks or ladles once it's cooked, or to skewer your chosen ingredient and hold it in the broth until it's done to your liking. Dong Lai Shun has been stirring hot pot for more than a century (Haidian Dajie 34 Hao, 011-86/10-6256-0556, from $4). The truly adventurous should head to the Wangfujing Street food market, a short walk east of Tiananmen Square, where they'll find hundreds of snacks from all over China--lamb kebabs from the predominantly Muslim Uygur region, cheeses from Inner Mongolia, and spicy Szechuan noodles. John can avoid meat by saying "Wo bu chi rou" (pronounced "wuh boo chuh row"), which means "I don't eat meat."

Badaling versus Simatai: Simatai is definitely the most authentic and unspoiled section of the restored parts of the Great Wall near Beijing. But there's a reason: It's much farther from the city than the more popular Badaling section--by taxi, 90 minutes versus 40. Given the limited time John and Amy have in Beijing, they're probably better off going to Badaling, where they'll still get picture-postcard views. In their case, they can expect fewer tourists anyway because it's winter.

After the Forbidden City: John and Amy should start in the historic Dongcheng district north of the Forbidden City. At the northwest corner of the neighborhood, just east of Qianhai Lake, are two towers originally built in the 13th century. The Bell Tower was rebuilt in the 18th century after a fire, but it still boasts the original Ming dynasty bell (Dianmenwai Dajie, 011-86/10-6401-2674, $2). By climbing the steep steps to the top of the Drum Tower ($2.50), just a stone's throw south, they'll get a bird's-eye view of the traditional hutongs, or narrow residential alleyways, that surround the Forbidden City. Down at street level, Amy can test her bargaining skills at the many curio and antiques shops.

After the maze of hutongs, the wide-open space of Beihai Park will be a welcome change (011-86/10-6407-1415, 60¢). Located between the towers and the Forbidden City, the park covers more than 160 acres, most of which is lake. In winter, the frozen water brings out ice-skaters.

The largest and most peaceful temple in Beijing is in the northeast corner of Dongcheng. Though it's a monastery now, complete with chanting and incense in the five prayer halls, Lama Temple was once a residence of the royal family, which explains the ornate carvings and tapestries (12 Yonghegong Dajie, 011-86/10-6404-4499, $3.25).

Outside the Dongcheng district, two must-see parks should top John and Amy's list. About 10 miles northwest of the Forbidden City, the Summer Palace park is a wonderland of temples, lakes, and gardens. It was built in the 18th century by the royal family as an escape from the heat in the Forbidden City (011-86/10-6288-1144, $2.50). The iconic Hall of Prayer for Good Harvests is the centerpiece of the 675-acre Temple of Heaven park southeast of Tiananmen Square (Tiantan Donglu, 011-86/10-6702-8866, $1.25). Dating to 1420, it was where the emperors of the Ming and Qing dynasties went to worship.