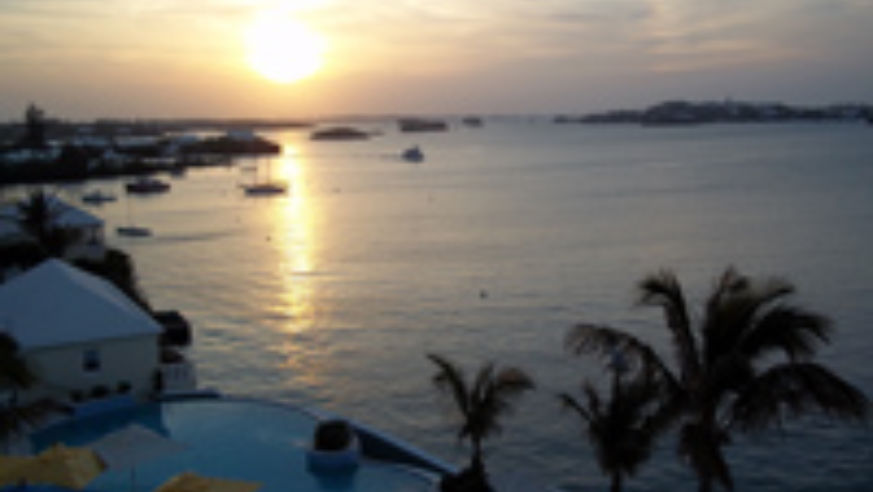 Last month, when my roommate suggested I join him on his work trip to Bermuda, I balked: There's no way, I thought, I can afford a last-minute trip to an island getaway.*

Plus, beach vacations generally aren't my bag. If I'm going to splurge on travel, I usually choose to do so by immersing myself into a cool culture—food, drink, art, etc.—not whiling away a whole weekend on the sand.

Luckily, I was wrong on both fronts.

The more I looked into Bermuda (and the more I had to hear my roommate prattle on about how cool it was), the more I wanted to go: The place has history. Little did I know, it was the first successful English settlement in the Americas. The town of St. George's dates back all the way to 1612. And even today, it has a big expat population from the U.K. (Curries served in pubs is common fare in Bermuda).

I've been hankering to get back to England since I studied abroad there in college. Now, maybe, was my chance to get a taste of British culture—with some beautiful beaches thrown in—for a fraction of the cost.

Plus, I learned, Michael Douglas was born there. He and Catherine Zeta have a house there. Who doesn't want to spot Gordon Gekko in his native habitat?

So, less than two weeks before my roommate's departure date, I frantically scrambled to join the party. Lo and behold, I managed to book a nonstop flight from Newark to Bermuda's Hamilton International for $213.

My roommate scoured the Web and secured a discounted rate at a newly renovated resort, the Newstead Belmont Hills. We invited two more friends along to siphon the cost (and add to the fun, of course), and that was that. We were off! The flight went seamlessly: I caught an 11:55 a.m. out of Newark—and was in my bikini, relaxing by the Newstead's infinity pool, by 4 p.m. We watched the sun dip down from our room's private balcony!

Then we caught a $6 cab ride, around the bay, into the capital town of Hamilton. My roommate's friend from work, a 20-something Australian who live on Bermuda, was nice enough to show us around, so I felt like less of a clueless tourist than I might have otherwise. He took us for British pub fare at the Hog Penny: I tried the steak and kidney pie (flakey crust and delicious cuts of meat), and my friends had fish and chips (they gobbled it up before I could snatch a bite and said it was great). The Australian also insisted we try Bermuda's two signature drinks: the Dark & Stormy, made with rum and ginger beer (too strong for my liking), and the Rum Swizzle, a fruitier concoction that went down a lot smoother. Finally we danced it off at The Pickled Onion down the block.

Saturday, we caught a free shuttle from the Newstead across the island to Elbow Beach: a quiet white-sand strip that looks out across some of the clearest, most turquoise water I've ever seen. We spent the morning watching the kiteboarders and swimming, then hoofed it back to our hotel. There's a convenient, well-marked footpath that runs alongside sprawling farms and gardens and cuts across the island, and we were back at the Newstead in twenty minutes.

That night, we caught another ride into Hamilton from a friendly cab driver, who claimed the Douglas family as his close friends (sadly, the closest I got to a spotting). He recommended a few restaurants for us to try, and we opted for his Italian suggestion: Little Venice. I ordered gnocchi, with fresh mozzarella and tomatoes: divine.

The four of us were scheduled to fly out Sunday afternoon, so we woke up early and made the most of the infinity pool and hot tub all the morning. (Temperatures hovered in the low 70's so a combo of both felt best.)

The weekend had gone by too quickly, but I felt like I'd gotten my money's worth. Our suite at the Newstead, with two double beds and its own private balcony overlooking the Atlantic, ran a pricey $544, but split between me and my three friends (the room comfortably fit all of us), we came out sitting pretty and each paid just $68 a night.

And with such a short commute, from the beach back to my apartment in New York City, my vacation-state-of-mind lasted well past its typical shelf life.

Now that I've been, I wonder if there aren't other weekend escape options that are just as fun, relaxing, and cheap…

So, here I hand the microphone off to you: What's your favorite, affordable, last-minute weekend escape? Tell me your best itineraries, in the comment section below, and we can take a travel cue from each other.

That said, here's the rundown:

FLY: A recent Kayak search found non-stop flights from NYC's airports to Bermuda's Hamilton International on JetBlue, Continental, and American for as little as $222. (Did I mention the flight's less than two hours long?) Flights from Atlanta started at $305, while Chicago options began at $323.

SLEEP: The Newstead Belmont Hills Resort & Spa is a 20-minute walk from Elbow Beach and a five-minute, $6 cab ride from Hamilton.

EAT: For British-style pub fare, try the Hog Penny Restaurant & Pub, in Hamilton. Also in the capital is Little Venice, a tasty pasta and wine spot.

DANCE: The place to go to get down in Hamilton is The Pickled Onion.

SWIM: You'll find gorgeous Elbow Beach on the west shore, near the middle of the skinny island of Bermuda.

*This post was re-published 4/29 to remove the accidental reference to the Caribbean. Sorry.