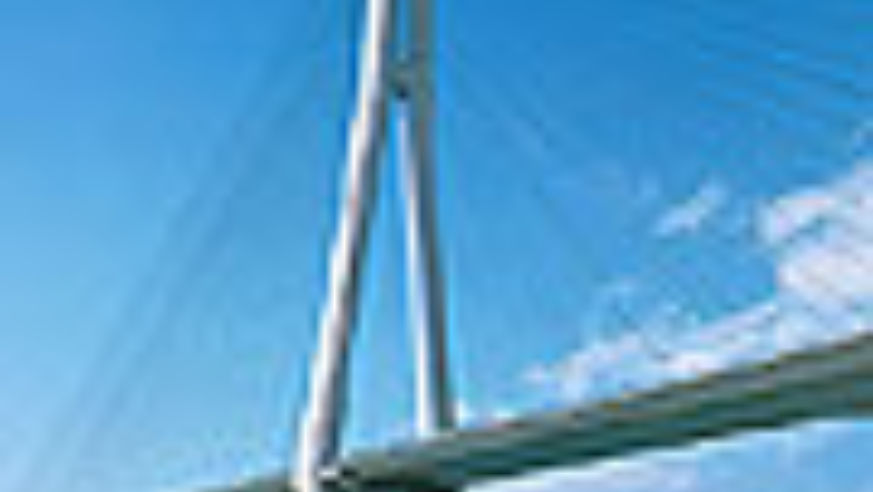 Flashy buildings get all the press, but bridges are making an even more dramatic leap forward. Here are the 12 most worth a detour.

FRANCE
Millau Viaduct
Completed in 2004, the Millau Viaduct is the tallest bridge in the world. It reaches a height of 1,125 feet, making it 141 feet taller than the Eiffel Tower (without the antenna). Back Story: Spanning a mile and a half between two plateaus in the Tarn Valley of southern France, the bridge is part of a network of highways that link Paris and Barcelona. Designed by British architect Norman Foster, the cable-stayed, masted structure is supported by seven concrete piers. The appearance is of a narrow ribbon stretching across the gorge. See for Yourself: The Millau Viaduct is about 400 miles south of Paris, a six-hour trip by car via the A10, A71, and A75 motorways (leviaducdemillau.com). The toll to cross is $7 per passenger car ($9 in the months of July and August). The Cazalous welcome area has a film about the construction and a viewing platform (011-33/5-65-59-42-86; from Millau, follow signs on the D992 roadway toward Albi/Toulouse). And the Millau tourism office sells guided bus tours of the bridge daily (ot-millau.fr, $13 per person, reservations are required).

ENGLAND
Gateshead Millennium Bridge
Since opening in 2001, the 413-foot-long Gateshead Millennium Bridge has linked the cities of Gateshead and Newcastle in northern England. Nicknamed the Blinking Eye, it's the world's only tilting bridge--opening and closing as an eyelid does in order to allow ships on the River Tyne to pass underneath. Back Story: The design is by London-based Wilkinson Eyre Architects. The deck, open only to pedestrians and cyclists, curves horizontally and, when not in use, hangs above the river from suspension cables fixed to a steel arch. The bridge uses hydraulics to tilt as a single, rigid structure: As the arch lowers, the deck rises, each counterbalancing the other. See for Yourself: For tilt times, do a search for "Gateshead Millennium Bridge" at gateshead.gov.uk. There's a free viewing platform attached to the Baltic Centre for Contemporary Art on the Gateshead side (011-44/191-478-1810, balticmill.com). The bridge is worth seeing during the day, when lighting on the underside of the deck creates a reflection on the river, and again at night, when the arch is lit up. During the week, the light is white; on weekends, it's a spectrum of colors.

Rolling Bridge
Designed by London's Heatherwick Studio and completed in 2004, the Rolling Bridge is just one of three innovative footbridges (see Helix Bridge and Station Bridge, below) that are drawing visitors to one of the largest mixed-use regeneration projects in Europe, Paddington Basin on the Grand Union Canal in West London. Back Story: Thomas Heatherwick's 39-foot-long kinetic sculpture is technically a drawbridge, but instead of splitting in two, it retracts by curling up into a tight ring so that boats can pass by. The eight steel-and-wood sections are hinged together; the hydraulics are cleverly concealed in the handrails so that nothing detracts from the clean lines. In its closed position, the Rolling Bridge doesn't resemble a bridge at all--it looks like a steel-and-wood octagon at the water's edge. See for Yourself: The Paddington and Edgware Road Tube stations are at opposite ends of the Basin (tfl.gov.uk/tube). To watch the bridge in action, go Friday at noon. Don't be late: It takes just three minutes to curl up into a ball. During warmer months, the Paddington Waterside Partnership leads a series of free tours of the area (paddingtonwaterside.co.uk).

Helix Bridge
The 24-foot-long Helix Bridge at Paddington Basin, designed by Marcus Taylor, is nearly 12 feet in diameter and appears to retract like a corkscrew to allow boats to pass by. (As it rotates, the cylinder moves back and forth on a track.) The bridge is open to foot traffic, but cracked panels need to be repaired before it can rotate.

U.S.A.
Denver Millennium Footbridge
Designed by ArchitectureDenver, the 130-foot-long Denver Millennium Footbridge (2002) was built to cross the railroad tracks separating Riverfront Park, a complex of stores, condos, and green spaces, from the 16th Street Mall. What makes the big impression, though, is the 200-foot-tall, tapered steel mast, which resembles that of a sailboat. Back Story: To have the deck as low as possible while still allowing trains to pass underneath, the support structure had to be above the deck, hence the single, tilted mast at one end. It's tilted to distribute the asymmetrical weight. See for Yourself: At night, the mast is lit from below, creating a beacon at the edge of downtown. Free shuttle buses run from the capitol building to Union Station, a five-minute walk east of the bridge (rtd-denver.com).

Sundial Bridge
Another Calatrava design, this glass-and-granite deck, completed in 2004, crosses the Sacramento River in Redding, Calif., linking the north and south campuses of Turtle Bay Exploration Park (turtlebay.org, $12). The cable-stayed design precludes the need for piers in the water, which would have disturbed a salmon-spawning habitat.

Reiman Pedestrian Bridge
Santiago Calatrava's first commission in America was the Quadracci Pavilion, a 2001 expansion of the Milwaukee Art Museum (414/224-3200, mam.org). He designed a footbridge to complement the brise-soleil, the wings that rise and lower to control temperature and light in the new pavilion.

NETHERLANDS
Lyre Bridge
Santiago Calatrava's Lyre Bridge (2004) is in Hoofddorp, near Amsterdam's Schiphol Airport. It's one of three cable-stayed bridges in the area designed by the Spanish architect; all cross the Hoofdvaart canal. Back Story: Unlike the other two bridges (see Lute Bridge and Harp Bridge, below), the Lyre has two connected spans--a 64-foot lower roadway and a 488-foot overpass--and a 190-foot mast. See for Yourself:: It's a 23-minute train ride from Amsterdam's Central Station to Hoofddorp (ns.nl, $10 round trip). From there, take the 145 bus south toward Leiden; it stops at all three bridges ($1.75). The bridges are within five miles of one another, if you'd prefer to walk or ride a bike.

Lute Bridge
At 86 feet long, the Lute is the shortest of Santiago Calatrava's three Dutch bridges. It provides access to the Toolenburg district of Hoofddorp. The city council had planned a roundabout and a bridge for the site, but Calatrava incorporated the idea of a traffic circle into his design: Two curved roadways join the two banks of the Hoofdvaart canal.

Harp Bridge
The 468-foot-long Harp Bridge, which provides an entry to the town of Nieuw Vennep, is another in Calatrava's trio of Dutch bridges. Designing three bridges in one area is a trend for the architect: Work on his three bridges over the Trinity River in Dallas, Tex., is scheduled to begin this year.

CHINA
Donghai Bridge
China is emerging as the Land of Bridges, with scores in development or under construction. The most ambitious project to date is the Donghai Bridge (2005). The longest cross-sea structure in the world, it connects Shanghai's Luchao Port to the Yangshan Islands in the East China Sea. Back Story: Most of the 20-mile-long bridge is a low viaduct, with six lanes designed for vehicle speeds up to 50 miles per hour. Its serpentine route lessens the fatigue drivers encounter when going in a straight line for long periods. Four cable-stayed arches allow ships to pass underneath; the main arch is formed by two 500-foot towers and has a span of 1,400 feet. See for Yourself: Although the bridge's primary function is to serve Yangshan's deepwater port, there are future plans to develop the East China Sea islands as tourist attractions. One company has recognized that the bridge has an appeal in itself: Last spring, Shanghai Huandao Shipping ran 90-minute sightseeing cruises from Luchao Port to Donghai Bridge several times a week. There was no word at press time that they'll be offered this year.