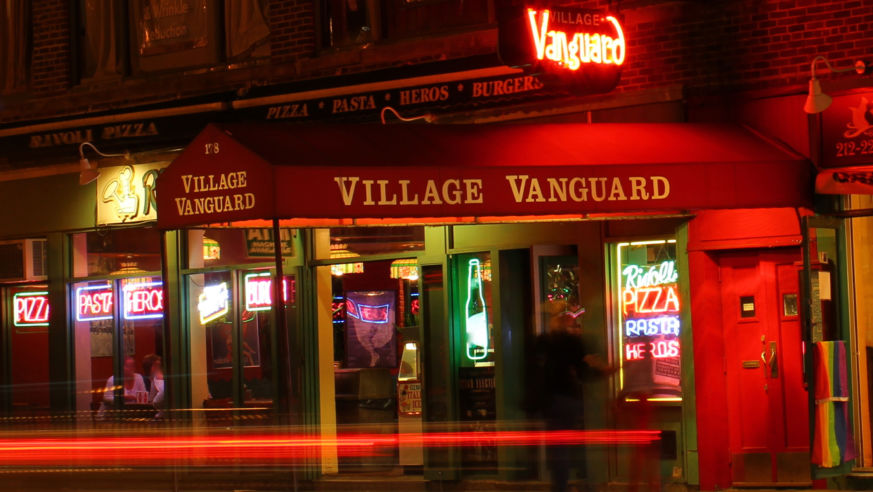 No trip to the Big Apple is complete without a visit to one of these world-class jazz venues, where America's greatest original art form is celebrated nightly.

New York City is the center of the jazz universe, the place with the densest concentration of the greatest musicians, the place where aspiring jazzers come to measure themselves against their peers. There are dozens of clubs that book these players, from big name venues to local bars to underground apartment concerts—the city is the most important destination for dedicated fans looking to hear both the old guard preserving the classic roots and contemporary players pushing the boundaries of the music. Here is a selection of some of the most notable places to hear what’s happening.

The most famous jazz club in New York City is also the oldest. A roster of legendary musicians performed here since it opened in the 1930s. And what’s more, some of the greatest live jazz albums were recorded here. For decades a bastion of swing and hard bop, over the past ten years the Vanguard has booked more musicians at the leading edge of jazz, like David Murray and Mary Halvorson. Groups play two sets per night, Tuesday through Sunday, and the Vanguard Jazz Orchestra plays every Monday, as it has since 1966.

A literal stone’s throw from the Vanguard is the aptly names Smalls. Opened in 1994 by musician Mitchell Borden, is a mainstay of the New York jazz scene—it presents at least two different groups a night (with additional matinées on the weekends) and for the dedicated jazz fan has regular jam sessions that begin at 1:00 am. There are regular appearances from old hands like Frank Lacy and Johnny O’Neill, as well as major up-and-coming musicians like Noah Preminger.

At the southwest corner of Central Park is the club for Jazz at Lincoln Center, the leading jazz institution in New York, directed by Wynton Marsalis. Music at Dizzy’s honors the masters and preserves the jazz tradition, and is the best place to hear vocalists survey the Great American Songbook. Dizzy’s has more of a concert hall feel than other clubs, but still has a bar, and serves food.

A slow elevator (max occupancy 5) brings you up to this spare, elegant space that has become one of the most important venues for new, live jazz. The Gallery’s schedule emphasizes the contemporary and forward looking scene, and is a place where musicians debut new ideas and groups—Henry Threadgill has presented important music here—and a site for live recordings as well. Still, keep an eye out for the hippest of the old guard, like Lee Konitz.

Located on a quiet side street near the “shores” of the Gowanus Canal, Shapeshifter Lab is a combination cutting edge venue and neighborhood joint. The relatively spacious, no-frills room is something of an arts center—you can catch bands and also check out paintings and hear poetry. The sounds here are modern, with some international flavor and the occasional classical and new music concert.

Close by lovely Madison Square Park is this combination club and restaurant. At the Standard, the jazz is as good as it gets (and the lineups can include Brazilian jazz and funk groups—Dr. Lonnie Smith is a regular), and the menu is courtesy of Blue Smoke barbecue.  Like the Vanguard, Mondays are for a regular big band, this one the Mingus Big Band playing music by the master bassist and composer.

The third point in the rough triangle that includes the Vanguard and Smalls, 55 Bar is just that, a bar that presents live music. Despite the prime West Village location, Bar 55 is relatively tourist free, perhaps because the only reliable way to find out who’s playing there is to go by and see what’s written on the chalkboard out front. An excellent place for blues as well as jazz, the bar entertains a regular, friendly, local crowd, including musicians there to hear their peers.

The jazz club with the most famous name, the Blue Note is a mini franchise, with branches in California, Hawaii, Italy, Brazil, China, and Japan. That means the club brings in the biggest names, from icons like Wayne Shorter and Herbie Hancock to commercially prominent musicians like Cassandra Wilson and Paquito D’Rivera. Despite the glossiness (there’s a gift shop), tickets are right in line with the Vanguard, Dizzy’s, et al., and the music is top-notch.

South along the Gowanus Canal from Shapeshifter and in a still-industrial neighborhood is this room where you can see the leading figures on the cutting edge of jazz in New York in a truly intimate setting—it’s really just a room with a piano and chairs. I-Beam runs on a shoestring and the focus is entirely on the music—their mission statement is to support musicians as they experiment with new works—which means admission is a $15 suggested donation, and there’s no kitchen or bar, nothing but terrific music.