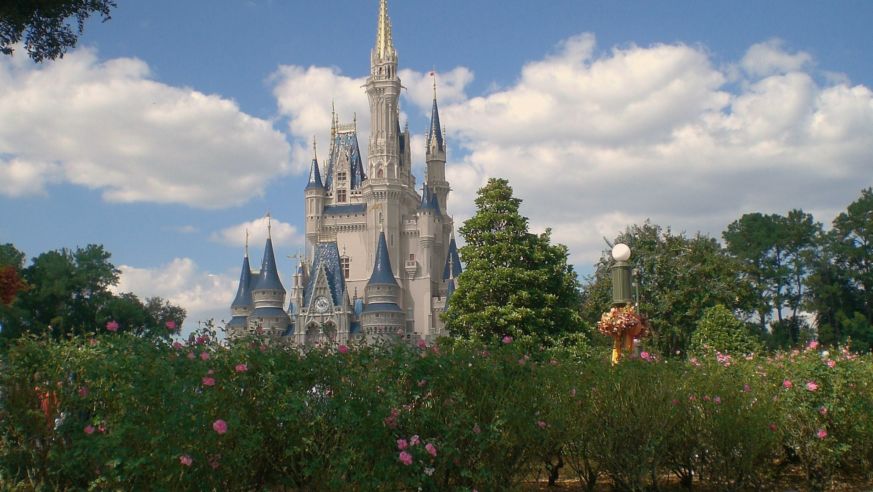 If these walls could talk.

Think you know Disney World? We're spilling about the park's hidden thrills, from obscure deals to free desserts to weird special effects that'll entertain any eye-rolling teen…plus a racy, adults-only inside joke that you'll only see if you know where to look.

If you weren't a believer in the magic of Walt Disney before, these obscure Disney World attractions and deals might change your mind. First: Yes, there is free stuff to be had at Disney World, and we'll tell you where to get it. Second: Adults, there is a particularly dirty joke to behold...provided you seek it out.

We spoke with longtime theme park journalist and Disney fanatic Susan Veness, whose book The Hidden Magic of Disney World was just updated with the newest secrets about the park. It's full of intriguing trivia—for example, what might look like a tree stump or a rock in Animal Kingdom really holds food or air conditioning to encourage the animals to come out of hiding so guests can see them—but more importantly for Budget Travelers, if there's anyone who can tell you what's worth your time and money, it's Veness. Read on for hush-hush must-do's, must-sees, and insider tips on how to save cash while maximizing fun.

1. The number-one little-known way to save money at Disney is through "cards": the Annual Pass and two other under-the-radar memberships.

Repeat Disney visitors in particular will love this hint: To reap the benefits of the Annual Pass ($697), only one person in your family needs to actually have one. It's good for a year of unlimited, same-day access to the four Disney World parks and free parking, and in turn, it unlocks a domino effect of resort discounts and shopping and dining deals.

"It's all about the cards," Veness says. "Annual Passholders also qualify for the Tables in Wonderland card [$100], which offers great savings on dining, including alcohol. The Landry's Select Club card [one-time membership fee of $25, offset by a $25 Welcome Rewards credit] is perfect for all guests dining at Landry's restaurants, including Yak & Yeti, Rainforest Cafe, T-Rex Cafe, and several offsite locations within the chain. You can even use it at Landry's restaurants back home."

2. Freebie alert! For a giant, wallet-friendly lunch, plus a free dessert, head to Downtown Disney.

Our favorite ways to save on food at Disney are strategies that Veness likes too: "Guests can save significantly at any dining location by paying attention to portion sizes," she says. "Most locations, especially full-service restaurants, have portions large enough that even two adults can share. Counter service locations won’t card you if you order a kids' meal."

But the real way to cash in is at the Earl of Sandwich in Downtown Disney/Disney Springs. They have "enormous sandwiches at modest prices [from $6]," she says. "Then pop into Ghirardelli Ice Cream & Chocolate Shop for a free sample of chocolate for dessert."

Little kids, especially, dig the interactive movie tie-ins, Veness says: "Youngsters love to find the key under the mat at Muppet*Vision 3-D and have the dog sniff their hand when they stick it up his nose in the Honey, I Shrunk The Kids Movie Set Adventure."

Older children and teens' minds are blown when they stand at the exact center of the Temple of Heaven in Epcot's China pavilion and speak. "The temple is acoustically perfect, and it's eerie to hear their own voice coming directly back into their ears so that they hear their voice as others hear it," she says.

Twists on history and nostalgia tend to be big hits with adults. "When they realize what looks like a swastika in the Indiana Jones Epic Stunt Spectacular is really a Balkan Cross with a Nazi flag background, they really appreciate the Imagineers' ability to 'trick the eye' with something more politically correct than the authentic item would be," she says.

4. Beauty and the Beast's Belle has a tawdry literary secret.

Venture into Belle's village in New Fantasyland for a spicy surprise. "Belle has left a book—The Dream of a Woman, by Remy de Gourmont—on the table in Maurice's cottage," Veness says. "De Gourmont's works are not exactly known for being G-rated." Indeed. We at BT—or, rather, I, the writer of this feature, was so intrigued about the subject matter that I dug up a 1927 critique of the book in the Saturday Review:

"[T]he sensual content, which is high in 'The Dream of a Woman,' often saves [de Gourmont's] non-critical books from dullness. There is a fashionable suggestion of perversion in the friendship of his two heroines, which is carried beyond the stage of suggestion in the affair of Claude and the model. It is possible that Remy de Gourmont's book, unimportant as it is, may enjoy some slight vogue because of its purely fleshly element."

Worth noting: Belle reads the book in the animated movie too. Scandal!

However, it's a 1917 paper I found about de Gourmont, "Ideals in Modern French Literature," by Katherine Lee, published in the journal Library, that might make the most sense about why Disney animators and Disney World Imagineers put "The Dream of a Woman" on brainy, independent Belle's reading list:

"Remy de Gourmont thought that each man should have his own personal vision of the world. His point of view in regard to human happiness is perhaps best brought out in his novels, which, it must be confessed, are more of the head than the heart. 'Le songe d'une femme,' a series of letters between various sorts of lovers, has an intellectual rather than a sentimental interest."

5. Keep your eyes peeled at Animal Kingdom to see something truly weird in the shrubbery.

If you go out of your way to see one thing at Disney, Veness says, head to Animal Kingdom. "Strange and obscure" is how Veness describes DiVine, a stilt-walker covered in greenery: "Look carefully—or watch for a crowd with a perplexed look on their faces. She blends into the foliage, but when she moves, she's an incredible sight." Another Animal Kingdom favorite: Gi-Tar Dan. "His ability to add guests' names to popular Disney songs makes him a big favorite with people lucky enough to come across him."

6. While you're planning and saving for Disney, remember these two mantras: Villas are your friend, and it's OK to chop your itinerary in half.

Vacation villas, like those on Airbnb and HomeAway, are ideal for families of five or more, or if you're traveling with friends or extended family, Veness says. "Very often these are less expensive per night, with the major benefits of multiple bedrooms, your own pool, a full kitchen that saves on dining out, several bathrooms, and the ability to get out of the hustle-bustle of the main tourist area and decompress for a while."

Time crunches are a buzzkill, so list what you'd like to do at Disney, then edit, edit, edit: "Be realistic about the tickets you need and the experiences you'll add to your vacation, especially if you plan to do more than just the Disney parks," Veness says. "Many paid-for experiences, such as the Frozen Summer Fun premium package, can be pieced together for next to nothing, and the overall experience is just as good, even without the roped-off viewing area. It's easy to get carried away with all the extras and try to cram everything in, but remember: You'll be back!"