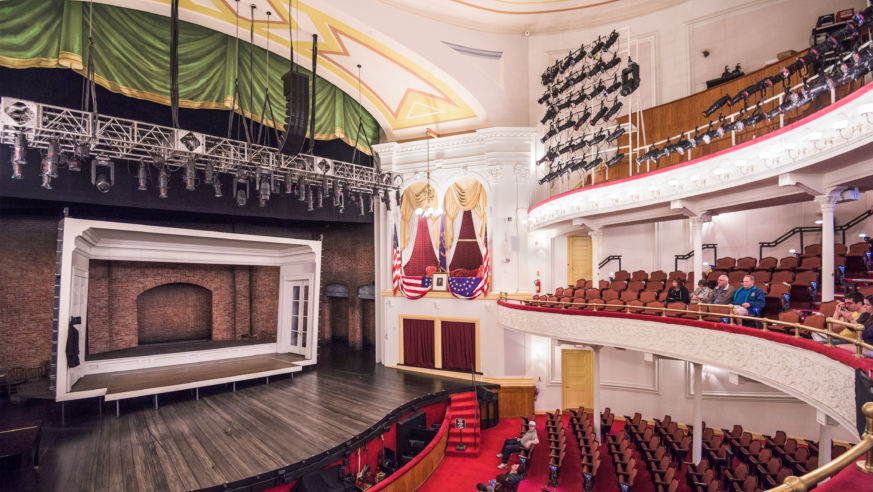 Ford's Theatre in Washington, DC, continues to hold plays in the historic playhouse.

New York City is the theater capital of America, and Broadway is its shining star, but that doesn't mean the Great White Way has a monopoly over the medium. While the bright lights of the Big Apple may overshadow smaller theater scenes around the United States, the productions in these ten underrated towns are worth way more than rotten tomatoes.

Fed up with the lights of Broadway, Sir Tyrone Guthrie moved to Minneapolis to begin his own repertory company in 1963. The Guthrie Theater went on to find success as a purveyor of classic and contemporary works and is arguably the most lauded theater venue in the Twin Cities. That's a mighty feat, considering Minneapolis and neighboring St. Paul are home to nearly 200 theaters and a healthy helping of successful organizations, including Brave New Workshop Theatre, Children's Theater Company, and touring venues like the Ordway and Orpheum.

Theater in Chicago is like deep-dish pizza: excellent and easy to find. The scene exploded in the mid 20th century when curtains went up on groups like Second City and Steppenwolf Theatre. Though these scrappy startups are now iconic institutions, the sentiments of their early days are still alive in Chicago's storefront theaters. Run by rag-tag post-grads looking to make their mark, these companies provide opportunities to see intimate productions in non-traditional settings.

Check out The Loop's historic Broadway-style houses for big-budget musicals. Internationally acclaimed companies like the Goodman and Lookingglass are exemplary for their groundbreaking work. With over 200 operating theater companies, even the suburbs serve up award-winning theatrical experiences.

Unlike its politicians, DC's theater companies know how to reach across the aisle and appeal to all audiences. The sprawling Kennedy Center is the best place to catch touring shows and concerts; Wooly Mammoth is the city's go-to for boundary-breaking theatrical experimentation; Signature Theater hosts ambitious productions of musicals; Shakespeare Theatre Company is one of the country's foremost interpreters of the Bard. Studio Theatre and Arena Stage are also noteworthy, as is Ford's Theatre, although President Lincoln had a famously terrible time there in 1865.

Philly is heaven for history buffs. There’s the Liberty Bell, Independence Hall, and – drum roll please – the oldest continually operating playhouse in America. The Walnut Street Theatre, a National Historic Landmark, has been entertaining audiences for over 200 years. Locals love the out-of-the-box storytelling done by dozens of smaller organizations like the Arden, InterAct, and The Philadelphia Fringe Festival, which hosts 1,000 performances for three weeks every September. For blockbuster Broadway shows, head to the glass-domed Kimmel Center and Renaissance-style Academy of Music.

If La Jolla Playhouse isn't using "San Diego tested, New York approved" as their motto, they're missing a good opportunity. Of the 101 original plays and musicals they've premiered, 32 found success on Broadway stages. They aren't the only ones, either. The Old Globe, modeled after Shakespeare's theater in London, has given birth to over 20 Broadway shows throughout its illustrious career. Between both theaters and nearly 150 other active performance spaces around town, San Diego is a veritable Broadway by the beach.

This Kentucky town turns into a hotbed of artistic activity when the Actors Theatre of Louisville hosts its annual six-week-long Humana Festival. It's like Sundance for theater geeks — people from around the world come to celebrate new productions written by an impressive roster of playwrights. The prestigious festival has premiered a zillion critically-acclaimed titles, including Becky Shaw, Danny and the Deep Blue Sea, and the Pulitzer Prize-winning Dinner With Friends.

It may be perennially overcast in this Pacific Northwest town, but Seattle's theater scene still manages to sparkle. Both A Contemporary Theater and Seattle Rep present homegrown greatness with their evocative works featuring the city's pool of talented professionals. The 5th Avenue Theatre focuses on developing new musicals and is a frequent incubator for Broadway shows. The Paramount, Moore, and Neptune Theaters — all part of Seattle Theater Group — collectively present around 700 live events annually.

Boston is an educational playground for young voices in the American theater. Prominent regional houses, including Huntington Theatre Company and American Repertory Theater, are affiliated with local universities like Boston University, Harvard and Emerson College. The surrounding areas are home to prolific art scenes as well, including North Shore Music Theatre (a half-hour away) and the Williamstown Theatre Festival, which brings Broadway-caliber productions to the Berkshires.

For a city obsessed with outdoor activities, you may be surprised that any Mile High inhabitant would be willing to spend an evening inside a stuffy theater. But the Denver Center for the Performing Arts, the nation's largest non-profit theater organization, is too spectacular to resist. The network of venues in this architecturally dynamic downtown complex host national tour premiers and pre-Broadway engagements, produce their own world-class performances, and help groom the country's up-and-coming talents at the annual Colorado New Play Summit.

Everything's bigger in Texas, including this city's prodigious theater landscape. The gleaming AT&T Performing Arts Center hosts glitzy touring productions. Smaller companies like the Uptown Players and Theater Three produce quirky, low-budget works. Fort Worth, a thirty-minute drive away, has a robust theater community of its own, including Casa Mañana and Bass Hall. The big-wig of the Big D? Dallas Theater Center. This nationally-recognized company has brought brand new productions and reimagined classics to Dallas for over 50 years.