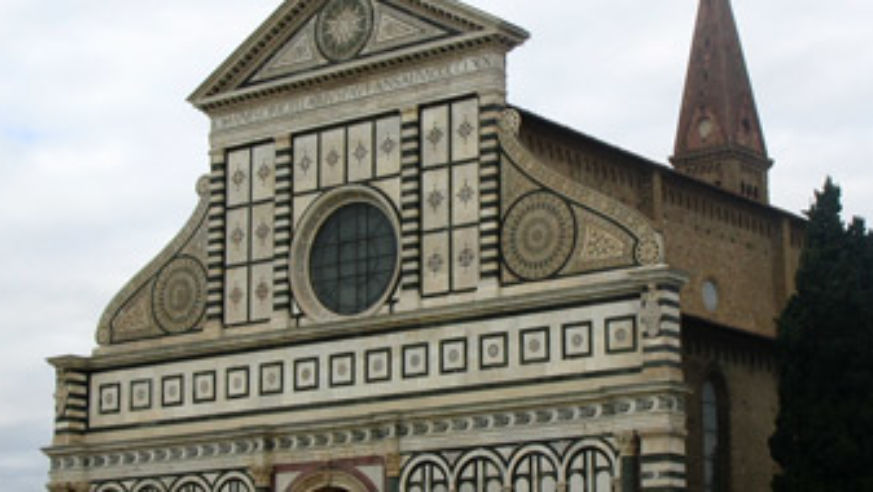 In Florence, Italy, the dome of the Duomo (or Basilica di Santa Maria del Fiore) is a wonder to behold, but the interior may not be worth the wait, since the art inside has been largely stripped away and stored in the adjacent museum. Instead, head to the recently refurbished Santa Maria Novella, which sums up three centuries of Florentine art, such as Gothic frescoes, Giotto's rather gruesome imagining of the crucifix, the revolutionary, early Renaissance facade by Alberti, and the spectacular High Renaissance cycle of frescoes by Ghirlandaio documenting the life of the Virgin Mary as if she were a Renaissance patrician. (For hours, visit the official Santa Maria Novella website.)

The benefit? Real art in its real setting with a much lower entrance fee (about $8 for Santa Maria Novella, versus about $11 to climb the Duomo plus about $5.60 (€4) to tour its Baptistery and about $8.50 to enter its museum where most of the artwork now resides). Both churches are free to visit for worship, of course.

Tip: Visit Santa Maria Novella's cloisters museum early in the morning, and you may just have the precious, early Renaissance frescoes of Paolo Uccello in the Green Cloister all to yourself. The cloister gets its name from Uccello's earthy green tones. His seething version of Noah and the Flood remains both beautiful and disturbing after nearly six centuries. You'll find the entrance tucked away on a small courtyard to the left as you are facing the church's main facade. Pay €5 for this perk. Have your hotel call in advance to check if reservations are necessary, given the church's shifting schedule of activities.

Now don't get us wrong. Neither Robert Landon nor Lonely Planet are dismissing any attraction that's rightfully famous. Everyone agrees you can have fantastic experiences at well known attractions. All we're trying to do here is recognize that—under some circumstances and for certain types of travelers—lesser known attractions may have their own appeal, offering comparable experiences.

For example, Basilica di Santa Maria del Fiore is an architectural wonder, given that is has the largest masonry (brick) dome ever built. (The story of its construction is fascinatingly recounted in Brunelleschi's Dome.) Florence's cathedral for centuries, this was also the burial ground for many famous local citizens. A garish new facade was added to the building in the 1800s. Its Baptistery is an artistic treasure, worth a look, too. If you decide not to pay the high fees to see these sites, you may want to tour the museum dedicated to them both (and containing many of the works that used to hang in them): Museo dell' Opera del Duomo for tickets of about $8.40 (€6). Among its key exhibits: Ghiberti's original panels for the door of the Baptistery and a Pietà by Michelangelo.

What do you think? Sound off below.

(Thanks to Jason and Kate for catching an editing error regarding the photo used in the original version.)