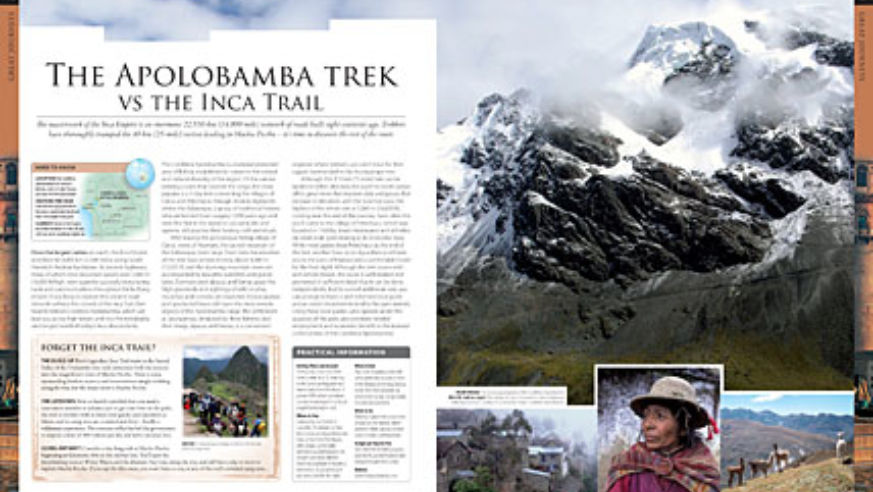 Hot off the presses is a new title from the DK: Off the Tourist Trail: 1,000 Unexpected Travel Alternatives ($40, dk.com) with lead contributor Greg Witt and a foreword by Bill Bryson.

The following is an excerpt:

Once the largest nation on earth, the Inca Empire stretched for 2,500 miles along South America's Andean backbone. Its ancient highways, many of which cross mountain passes more than 16,000-feet high, were superbly successful in nurturing trade and communications throughout the far-flung empire. If you long to explore this ancient road network without the crowds of the Inca Trail, then head to Bolivia's Cordillera Apolobamba, which will lead you across high terrain and into the remarkably unchanged world of today's Inca descendants.

The Cordillera Apolobamba is a national protected area of Bolivia, established to conserve the natural and cultural diversity of the region. Of the various trekking routes that traverse the range, the most popular is a 5-day trek connecting the villages of Curva and Pelechuco, through Andean highlands where the Kallawayas, a group of traditional healers who performed brain surgery 1,000 years ago and were the first in the world to use penicillin and quinine, still practice their healing craft and rituals.

After leaving the picturesque hilltop village of Curva, views of Akamani, the sacred mountain of the Kallawayas, loom large. From here, the elevation of the trek stays almost entirely above 13,125-feet, and the stunning mountain views are accompanied by beautiful waterfalls and glacial lakes. Domesticated alpacas and llamas graze the high grasslands and sightings of wild vicuñas, viscachas, and condors are expected. Elusive pumas and spectacled bears still roam the most remote regions of the Apolobamba range.

MORE FROM THE BOOK

Better than the Eiffel Tower?