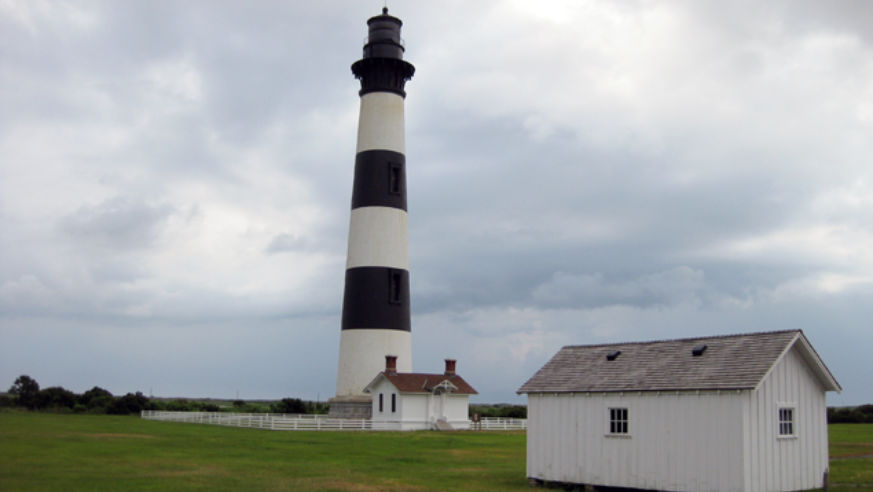 Bodie Island Lighthouse, in North Carolina's Outer Banks, is welcoming the public for the first time in its 141-year history, with guided tours through Columbus Day.

Ready for some exercise? The 214 steps to the top of the Bodie Island Lighthouse are waiting.

The North Carolina icon—one of only 12 lighthouses in the U.S. that are more than 150 feet tall—is now open to the public for the first time since it was built more than 140 years ago. A $5 million renovation repaired unreliable stairs, a broken and dirty 19th-century Fresnel lens (which includes 344 glass prisms), and rusted iron work, reports the Associated Press. The reward for making it to the top? Views of the Atlantic Ocean, Pamlico Sound, and the marshland around Bodie (pronounced "bah-dee") Island.

The project was spearheaded by the Outer Banks Lighthouse Society, founded the 1994 by a local couple who started the society with their own money. The $5 million in renovation funds came from the National Park Service, and work stopped in 2010 when more serious structural problems were found by contractors and corrected.

The Bodie Island Visitor Center is about a 15-minute drive from Nags Head, part of the Cape Hatteras National Seashore. Guided tours will run through Columbus Day from 9 a.m. to 5:45 pm. daily ($8 adults, $4 seniors, free for children 11 and under—but children must be at least 42 inches tall and accompanied by an adult). Other nearby attractions include Jockey's Ridge, which is the largest sand dune on the East Coast and popular with hang gliders, and the Nags Head Woods Ecological Preserve.

TALK TO US! We want to know: What's your favorite lighthouse in the U.S.? What is it that you love about it?