Boston: A new trail on the historical scene 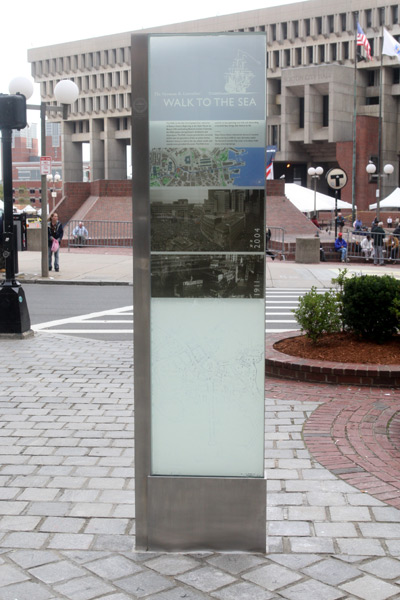 Courtesy Norman B. Leventhal Walk to the Sea

Boston's newest walking trail, the Norman B. Leventhal Walk to the Sea, is a one-mile route from Beacon Hill to Boston Harbor lined with 10 panels displaying old maps and photos of the city from its days as a colonial port until today. You can download a map of the trail—which threads down Beacon, Tremont, Court, and State Streets before ending at the Long Wharf—from its website. You can even read the contents of each panel via the website if you can't pound the pavement in person.

A satire of Western movies that tours the U.S. this month was a surprise hit in Paris

Paris may possibly be the furthest thing one can imagine from the Wild West. But for one month this fall, a rip-roaring show called "The Spaghetti Western Orchestra" brought a little bit of the mythical frontier to a corner of the 11th arrondissement. And the show comes to the U.S. for a tour toward the end of this month. The modern-day cowboys are actually a group of Australian musicians playing the songs of Ennio Morricone, an Academy-Award winning composer of American western films like A Fistful of Dollars (which starred Clint Eastwood). Even if you have not seen the movies, most of the songs are instantly recognizable. At one recent performance, even French members of the audience were able to join in for a sing-along of sorts to the theme of Le Bon, Le Brut et le Truand (from The Good, The Bad, and the Ugly). "The show is popular wherever we play it," said Graeme Leak, one of the musicians, in an e-mail interview. "It reminds people of the old days of cinema when you left the theater with almost a euphoric feeling." Anyone who came to the show expecting a full orchestra may have been surprised to find just five musicians on the stage, although the performers do play 100 instruments between them. In addition to a full range of traditional instruments, the performance features sound effects using cornflakes, clinking bottles, and a rubber glove. "The Spaghetti Western Orchestra" also is not just a concert. The five musicians each play a character: the bank teller, the lie teller, the young feller, the "raconteur" (storyteller), and the mysterious "goldschmeller." Skits and stories are interspersed between the songs, both to pay homage to and poke fun at the old western films, complete with "gun shots" and creaky hinges. A sample skit: One of the characters has the "wrong" script, so they run a clothesline across the stage to transfer the script from one character to another. The lines of the character who lost his script are the same word over and over. ("Yeah." ..."Yeah." ..."Yeah.") The performers have perfected their cheesy Western accents, even though they are native Australians. In Paris, most of the dialogue was spoken in English, with a few terribly pronounced words in French thrown in to make the audience laugh. "Whenever we arrive in a new country it takes a few days for us to work in the right mix of language and references," said Leak, who plays the bank teller. "We are not multi-lingual, but we try to include some words and references in the language of our host country to bring the audience closer to us." The language barrier didn’t seem to be a problem in Paris, as the few hundred audience members laughed, clapped and sang along (with cue cards). At the end of the performance the musicians returned for three curtain calls, eventually leading to a standing ovation. The "Orchestra" first came together in Australia in 2000. Stints at the 2006 Edinburgh Festival and the 2007 Montreal Jazz Festival proved a great success, and the show has since played in in the German cities of Hamburg and Cologne. The American tour dates are as follows: October 24 at the State Theater in New Brunswick, N.J. October 25 at Proctors Theater in Schenectady, N.Y. October 27 at the Flynn Center for the Performing Arts in Burlington, Vt. October 28 at the Hopkins Center for the Arts in Hanover, N.H. October 31 at the Carlsen Center in Overland Park, Kans. November 6 at the Del E. Webb Center for the Performing Arts in Wickenberg, Ariz. November 7 and 8 at the Scottsdale Center for the Performing Arts in Scottsdale, Ariz. November 10 at the UT Tyler Cowan Center in Tyler, Tex. November 11 at the Memorial Student Center at Texas A&M; University in College Station, Tex. Ticket prices range from $20 to $55, depending on the venue. For more information, visit spaghettiwesternorchestra.com. &mdash;Liz Webber, reporting from Paris

Free tours aren't always worthwhile tours. So when I heard that Times Square offers a free Friday lunchtime walking tour, I was curious just how informative and entertaining it was. Good news: I took the Times Square Expos&eacute; Tour a couple of weeks ago, and I found that It's definitely worth taking. It will open your eyes to the neighborhood's good, bad, and even ugly history. And it's price&mdash;free&mdash;sure beats the typical $25 cost of similar neighborhood tours. Lucky travelers will have Judy Richheimer as their guide. She's a true New Yorker with a flair for the dramatic who has been leading the Times Square Expos&eacute; tour for over a decade. (When she does take the occasional day off, an equally knowledgeable substitute leads the tour.) Judy's tour starts at the Times Square Visitor Center under the antique chandeliers inside a gorgeously restored 1925 theater on Broadway between 46th and 47th streets. At the end of the tour, Judy points at the art deco former headquarters of Paramount Pictures, and the ultra-modern New York Times Building. As you stand on the busy street corner, you'll see the differences between the buildings from two very different eras. If you're like me, you'll be awestruck. Along the way, Judy will make more puns than there are lights in Times Square and even teach you how to jaywalk like a true New Yorker. The tour isn't limited to Broadway and theater sites. You'll visit two "churches" on the tour: St. Mary the Virgin, an Episcopal church, and John's Pizzeria, a deconsecrated church. Both stops include views of stunning stained glass features and intriguing smells. John's, of course, smells of the garlic and basil used in their coal fired pizza. St. Mary's, though, smells strongly of incense&mdash;so strongly, in fact, that many, including Judy, refer to the church as "Smoky Mary's." The church even sells tins of Smoky Mary's Incense at their gift shop ($15). Judy will also point out interesting architectural details, such as the marble and bronze statues of famous actresses on the outside of the I. Miller Shoe Building. The story goes that Miller, an immigrant cobbler whose shoes were a hit with Broadway actresses, wanted to thank the people that helped him "get his feet on the ground" as Judy would say. He decided to put effigies of his favorite New York ladies on the side of his building. He let the public vote on which ladies should be immortalized. The winners and the roles they portrayed&mdash;Ethel Barrymore as Ophelia, Marilyn Miller as Sunny, Rosa Ponselle as Norma, and Mary Pickford as Little Lord Fauntleroy&mdash;were unveiled in 1929 and are still proudly visible today. &mdash;Katie Jakub The free weekly Times Square Expos&eacute; tour is sponsored by the Times Square Alliance, which works to improve and promote the neighborhood. The tour starts every Friday rain or shine at 12 p.m. and lasts about two hours. It leaves from the Times Square Information Center at 1560 Broadway, by the landmark Embassy Movie Theatre. Although no pre-registration is required, you should sign-in at the information center (inside the restored theater) and find out where to meet your guide. The tour ends at Smith's Bar on the corner 8th Ave and 44 Street. MORE INFO? Contact the Times Square Alliance by phone at 212/768-1560 or e-mail at info@timessquarealliance.org, timessquarenyc.org.

This weekend: Take a bite out of Atlanta

More than 70 restaurants will offer food samplings and wine tastings this weekend at Taste of Atlanta. The event will be held on the streets of Atlantic Station, a lively midtown district refashioned out of a former steel mill. Your admission price (starting at $25) lets you try dishes from a list of restaurants that includes Rosa Mexicano, Sambuca, and The Capital Grille. The ticket price includes 10 Taste Coupons, which work sort of like tokens; restaurants will be selling tastes for a certain number of tickets. Additional coupons are sold in $5 and $10 increments. On the main stage, cooking demonstrations will spotlight culinary stars. If you're a Bravo TV lover, prepare to swoon: The schedule includes appearances by Richard Blais, a hometown boy and Top Chef finalist, and Ted Allen, a food and wine guru of Queer Eye for the Straight Guy fame who is now a Top Chef and Iron Chef judge and Food Network star&hellip;(can you tell I'm a fan?) Also on the stage will be bet-you-didn't-know-she-was-a-cookbook-author Trisha Yearwood. The country crooner will be doing some down-home cooking with her mom and sister. Also of interest is set of tables that feature restaurants using local and sustainable food. If you're interested in the local sourcing movement, visit this Country Road section of the event. It's a great way to connect with chefs in the area; they'll even be doing cooking demonstrations with their local farmers. Saturday and Sunday, 11 a.m. to 6 p.m. Twelve Atlantic Station, 361 17th St NW. Tickets are $25 per day in advance or $35 at the door; children under 12 are free. You can buy tickets online.

Wacky hotels: Sleeping in a grain silo may become a thing of the past

After nearly 30 years in Akron, Ohio, The Quaker Square Inn's days as a hotel may be numbered. Listed on the National Register of Historic Places, the inn is made out of 36 Quaker Oats silos from the 1800s. Each silo is 120-feet tall and contains dozens of perfectly-round guest rooms, each with a 24-foot diameter and its own private balcony. As if that weren't enough Americana, the Trackside Grille off of the lobby is located in a 1930s Pullman train car and carries more than 30 milkshake flavors. The complex has been owned by Hilton and Crowne Plaza at various times. Recently the inn was bought by the University of Akron, which will likely convert it into a dormitory. Four floors already house students, but a spokesman says the remaining 91 rooms will stay open to non-student guests until November 2009, from $99. While reviews on TripAdvisor were mixed and visitors say the hotel is showing signs of wear and tear, its design is pretty neat. And as a dorm, it sure beats the Howard Johnson that I lived in when I was a first-year student at Boston University. (My school had run out dorm space, you see, and had rented rooms for us at the local HoJo. The karaoke machine in the common area was a fun perk.) Have you stayed here? Do you know of any other re-purposed hotels?