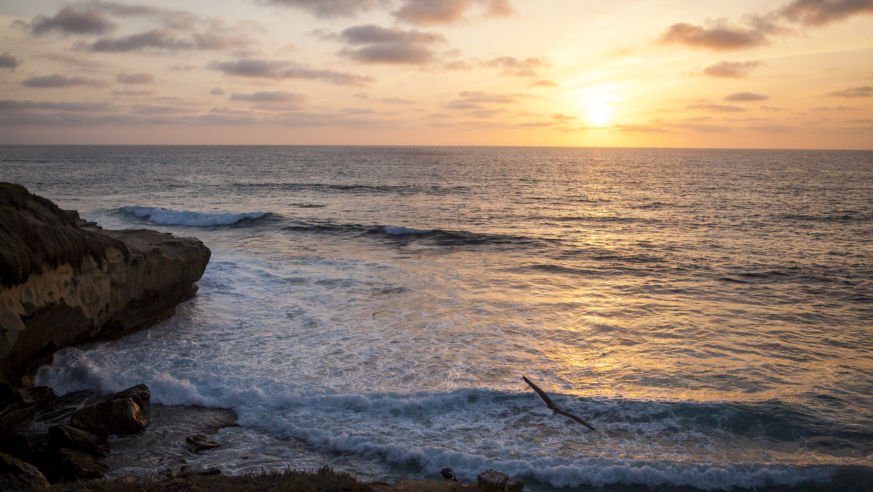 We're starting our #BTRoadTrip strong, on an incredibly scenic stretch of road: the Pacific Coast Highway (a.k.a. Highway 1) just south of Los Angeles. Fruit stands often pop up along the highway, and Whitney couldn't resist grabbing two pints of ripe red strawberries for a grand total of $4 before taking in the scene at Tamarack State Beach, one of California's gorgeous Carlsbad Beaches.

So many cars were pulling over that she initially thought there must be a festival going on. Nope! The pre-sunset tides were so ideal that droves of surfers were racing to the ocean on a mission to catch the perfect wave. After snapping shots of surfers suited up and expertly skimming the water, Whitney—a self-described "surfer poseur"—sat on the beach and ate her fresh, naturally sweet strawberries while looking out over the Pacific Ocean, at times seeing nothing but the heads of agile surfers bobbing up and down in the distance.

Dipping 12 miles south on the PCH took Whitney a little longer than she'd anticipated, for the best reason possible: One of the great problems to have while driving along the PCH is there are so many places to stop and experience a brand-new ocean view, Whitney says. As she drove, picturesque vignettes of the ocean kept appearing to Whitney's right, one after the other. Finally, in Del Mar, south of Encinitas, Whitney stopped at a vantage point high enough on the cliffs to see cascading layers of waves lapping at the shore, juxtaposed with cars zooming by on the highway, mere feet away from the sand.

The end-of-the-day cherry on top of Whitney's San Diego route? Sunset in La Jolla, another 12 miles down the coast. But as Budget Travelers know, the destination is secondary to the journey: En route to La Jolla, she sailed past Torrey Pines State Natural Reserve, veering right on Torrey Pines Road to witness a sudden magical canopy of undulating, nature-twisted torrey pine trees. Professional photographer or not, Whitney says the fairy-tale surprise is enough to make anyone instinctively reach for their camera. She did. Down the road, at La Jolla Cove—famous for the hundreds of seals who call it home—she made it just in time to catch the Pinterest-worthy sunset pictured above. An ocean-loving gull glided into the frame at the very last moment.

Whitney's Travel Tip: At La Jolla Cove, wait 15 to 20 minutes after the sun sets and the rest of the visitors leave to watch even more vibrant colors appear.

Next stop: The American Southwest.