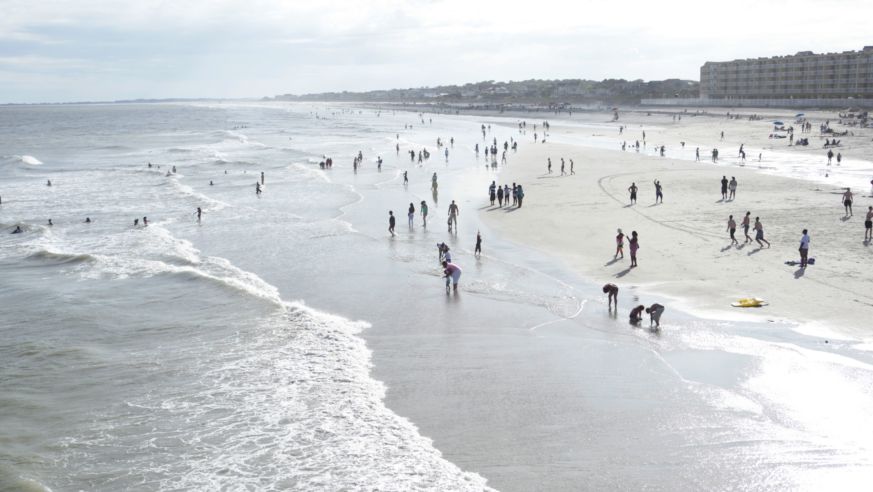 Is it over already? After two weeks chock-full of unique towns, local eats, and activities from two-stepping to peacock-spotting, Whitney's cross-country road trip came to a close. But not before she pumped the brakes in order to settle into Georgia's slow southern pace, eventually winging her way up to South Carolina, to see the sun set quite literally on her trip.

Dusk in Savannah. As the sun melted like hot butter over the horizon, over the rooftop of Whitney's hotel, she plotted her morning journey to Clary's Cafe for breakfast, on the recommendation of a local she met back in Tallahassee. Once there, a plate of perfect eggs florentine, two bright-yellow paprika-sprinkled hills, cozied up with a generous bowl of grits, materialized in front of Whitney. A side of homemade corned beef hash? Why not?

Whitney hopscotched among Savannah's 22 lush, grassy squares to iconic Forsyth Park, draped in the Spanish moss that's inseparable from the idea of Savannah as a city. Trivia: The historic park was designed by Frederick Law Olmsted, the same landscape architect who designed New York City's Central Park. After capturing the trees and fountains on camera and doing some serious people-watching and music-listening—musicians constantly play in the park—Whitney took her time meandering along the river, stopping at Savannah's Candy Kitchen for a candy-dipped apple crisscrossed with ribbons of white and dark chocolate to bite into as she took in the water views.

Pre-dinner candy aside, this is the south: There's always more room for home cookin'. The Olde Pink House restaurant has a much-deserved reputation for its classic dishes, including "southern sushi," smoked shrimp and grits rolled in coconut-crusted nori, and a side of "hoppin' john," black-eyed peas and rice that Whitney spooned up like it was her last meal on the road.

But not so fast: One last southern state loomed on the horizon as Whitney zoomed up I-17. Folly Beach, South Carolina, grabbed her attention immediately with its classic Atlantic Coast vibe: locals fishing, eating ice cream, playing volleyball, dipping their toes in the surf, and lolling about on the sand. Come dinnertime, Whitney bellied up to the Folly Beach Crab Shack and ordered up a dish of crab balls with with rémoulade for less than 10 bucks, then set out for the best place to watch the sunset, according to a couple fishing on the pier.

As Whitney watched the horizon shift from orange to pink to navy from a boat marina between Folly Beach and Charleston, she let her mind drift back to the start of her trip, her thoughts running backward across the country, up and down the south's peaks and valleys, past its ocean vistas, along the open road, accompanied only by her camera, now full of freeze-framed vistas, natural beauty, and the faces of new friends.

Whitney's Final Travel Tip: Don't hesitate to travel alone. The act of traveling with others is irrefutably awesome, but embarking on a solo journey births new and different experiences that, quite honestly, couldn't happen if you weren't by yourself, surrounded by everything unfamiliar.