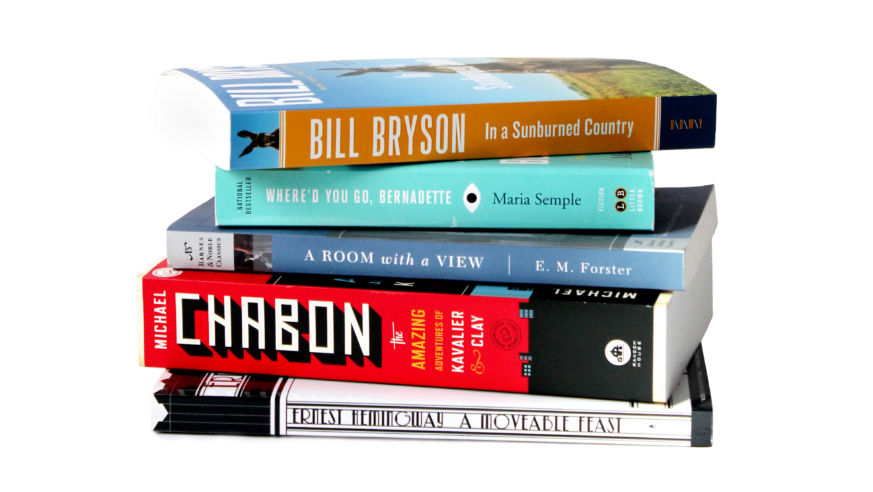 These stories have broadened our worldview and inspired us to visit far-flung places. Our picks will entertain you on a long flight…or curled up by a fire.

A Room with a View (E.M. Forster) manages to be a romantic comedy, travelogue, and deeply moving rumination on art and mortality at the same time. No small feat, but Forster (author of Howard’s End and A Passage to India) is no small writer. When Lucy Honeychurch arrives in Florence from the U.K. with her uptight spinster cousin, Charlotte, she has no idea that accepting a “room with a view” from a quirky neighbor at their pensione will, over the ensuing months, open up a more figurative “view” that will change her life. Spoiler alert: best literary kiss ever. —Robert Firpo-Cappiello, Editor in Chief

Bill Bryson’s love letter to Australia,In a Sunburned Country, has quickly become my all-time favorite travel book. I’ve always dreamed of doing what he did—driving from city to city, meeting locals along the way, and writing about it. Bryson’s style of storytelling keeps you captivated and following along with his adventures like you’re hearing about the travels of a close friend, and all the while he’s delivering historical context in a hilariously entertaining way. As Bryson says at the end, “You see, Australia is an interesting place. It truly is. And that really is all I’m saying.” —Kaeli Conforti, Digital Editor

My favorite kind of novel is one in which I can relate to the characters—or at least get the urge to venture alongside them. Bernadette Fox, the protagonist in Where’d You Go, Bernadette, by Maria Semple,isn’t someone you’d readily admit to seeing yourself in, but she’s so real, so fierce, so flawed, so…infamous. She’s a non-conforming Seattle mom, an esteemed architect, a humorist, and a best friend to her daughter. As you might infer, one day Bernadette disappears. What I love most is it’s not so much a mystery novel as it is a psychological exploration of an endearing character through travel-related occurrences. —Whitney Tressel, Photo Editor

The Amazing Adventures of Kavalier & Clay, set in New York City, makes me see the city with fresh eyes. There is so much history hidden in plain sight in New York, and the author, Michael Chabon, brings out the city’s romance, energy, and mystery. I’ve lived here all my life, but when I read this book, it makes me want to get a map and a bike and explore. In Kavalier & Clay, the cousins work in the Flatiron District, and many old buildings that are referenced are still standing. It feels like the characters could be there now. —Amy Lundeen, Photo Director

A Moveable Feast, by Ernest Hemingway, might seem like an obvious choice, but when you dive into the stories about Hemingway’s time in 1920s Paris, hanging out with the likes of Gertrude Stein, you’ll see why the book remains a classic. Hemingway’s tales of arguing with wannabe literary critics in cafés, nursing a drunken F. Scott Fitzgerald (whom he was clearly jealous of), and drinking Châteauneuf du Pape with steak frites at lunch make Paris vibrate as a freewheeling, energetic, creative place where writers are welcome to linger at bistros perfecting their masterpieces. When I’m lucky enough to go to Paris, I always visit one of Hemingway’s old haunts. —Jamie Beckman, Senior Editor