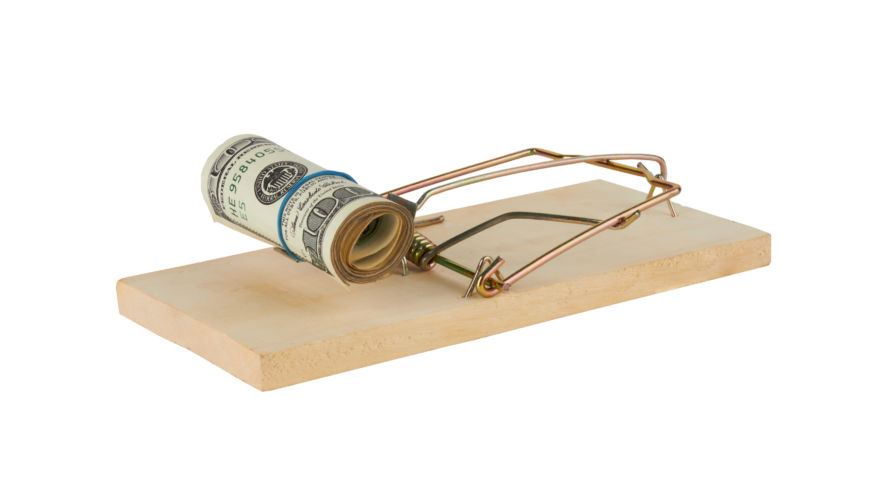 We're all for the occasional splurge—especially when you're on the road or overseas having a ball. But watch out for these worst-ever money pits that are never worth the extra cash!

Getting fleeced anywhere, whether in the states or abroad, is never fun—especially when you're trying to travel conservatively. Different languages and customs, however, can send even the smartest traveler into a financial tailspin. "Being gloriously overwhelmed by novelty and excitement at every turn leads us to be less perceptive than perhaps we might be back at home," says travel psychologist Michael Brein, Ph.D. "After all, the money is Monopoly play money—it isn't that real—so it's no wonder that it goes relatively more quickly than we think or expect." Recognize the world's top 10 worst travel ripoffs and you can save your cash for meaningful experiences that are worth the coin.

When you're at home riffling through your closet for the perfect attire for daytime, nighttime, and every time in between (you never know, you might be invited to the opera or a picnic, right?), toting along an extra piece of luggage can seem sane—if not downright practical. Not the case, says travel expert Terry Trippler, founder of the consumer website The Plane Rules. "Chances are you aren't going to wear all that stuff you packed and end up paying more in baggage charges," he says. "In a lot of hotels, you can have clothing laundered for less than taking more and paying excess baggage charges."

Travelers can occasionally get a deal by purchasing travel insurance, but only buy it if you read and completely understand the policy. Otherwise, it can be worthless. "Travel insurance used to be basically flight insurance, but with the advent of non-refundable tickets, et cetera, businesses saw a market to sell insurance to cover expenses associated with the traveler's entire trip," Trippler says. (Medical care is one example.) "Watch this one—closely."

The ways that unsanctioned cabs take more than their share of your money by unscrupulous means are many, including high unstated charges, less than efficient routes, and incorrect change returned, says Brein. Instead of hopping into the car of the first person who offers, he suggests asking yourself these questions: "Is the cab marked or not? Is there a license or permit visible? Is there a price chart available? Is the taxi parked with others or hidden away? Is the driver with the cab or hustling elsewhere?"

It sounds simple, but try to eat like the locals eat whenever you can, and that means deliberately avoiding the tourist traps. Specifically, watch out for incongruous cuisines, like an Italian joint next to a Caribbean beach, or restaurants that brag about their exquisite panoramic vistas. "What you might lose in atmosphere or views, you will gain in price and authenticity," says Laura Siciliano-Rosen, founder of Eat Your World, a website dedicated to finding the best local eats around the globe. To avoid shelling out cash for sub-par food, she suggests chatting up the locals—and not necessarily the hotel concierge. "Ask regular people: your taxi driver, your waiter, the guy next to you on the bus, the woman in line with you at the supermarket," Siciliano-Rosen says. "Also, you can probably tell where locals are eating by the look of a place. Does the place seem like it's trying to attract tourist money? Who's at the tables? Do you see any guidebooks or cameras?"

A hotel room in the Big Apple can sound enticing no matter what neighborhood you're in, but for the amount of money you plunk down, you don't get much. What you do get is often an older hotel with tiny rooms. Trippler calls it "probably the worst 'value' in travel." Before you book, research exactly what you're getting, or branch out to reputable hotels in other boroughs.

When you picture a members-only portion of an airport, replete with its own bar, your first instinct might be to expect smoking jackets and the tinkling of a grand piano in the background. Not so these days. The reality can be anything but a sophisticated zen environment, which is not worth spending your money on, especially if you're paying a pricey day rate. "More and more people are joining and too often you can find a club that is just as crowded and loud as the airport departure gates," Trippler says. "The 'value' of any airline club depends on how often you will use it and the cities you will generally visit."

A fancy uniform does not a reputable guide make. After deplaning in your destination, you might be accosted by "guides" who look official in dress, but actually are paid to take you to high-priced, touristy locales. "They all lead you to think that they are who they say they are, but in reality they are not," Brein says. "More often than not, they lead you not to places to stay, markets and shops, and sights that have merit or good value, but rather to places that more often than not suit their own purposes." If you need help navigating a city, seek out guides from official bureaus, Brein says.

Trying to beat the system—and more specifically, the exchange rates—by changing money with locals on the black market is only going to hurt your wallet in the end. "Often, a few good bills are mixed in with money padded with either folded smaller bills, older illegal money, newspaper, and whatnot, and the money changers are usually out of there so quickly that the duped tourist has little or no recourse," Brein says. Stay on the straight and narrow and, if it helps you to know before you go, research exchange rates before you leave the country to avoid sticker shock at the counter.

9. "MINIMUM" FEES AT RESTAURANTS OR CLUBS

In some countries, "minimum" charges for entering a sought-after (or salacious) nightclub are commonplace—and some restaurants bill you for what seems to be free, like mineral water. The last thing you want to do is blow your budget without getting anything in return. "These tourist-only fees seem to exist in restaurants around the world, particularly in Europe," Siciliano-Rosen says. "The charge may or may not be listed on the menu. When in doubt, gently refuse the bread if you didn't ask for it."

When in a country like India, which imposes an exorbitant tax on alcohol, skip the cocktails at restaurants, which can easily cost upward of $15. Go for virgin refreshments instead, such as India's traditional yogurt drink: "Stick to a lassi and save the beer for the hotel fridge," Siciliano-Rosen says.