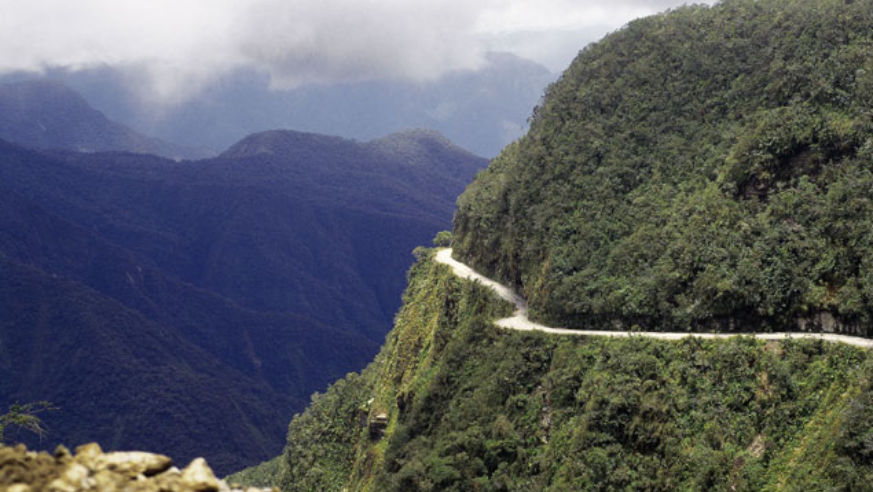 Thinking about hitting the road on your next vacation? Be careful out there. Not every country (or state) has the same safety standards that you may be used to. We spanned the globe and found five places where you might want to stay off the streets—and five places that are exceptionally safe.

Regardless how "streetwise" you are at home, "streetwise" means something very different when the streets you're traveling are unlit or risky ribbons of roads, clinging to a cliff top. In many parts of the world, roads are poorly maintained and you'll have to share the lane with beasts, bikes, and abandoned vehicles. Even here in America, there are places where drivers should pay extra attention to the road. We wanted to get to the bottom of exactly where caution should be taken, and found five places with perils you may not have ever considered, from South American back roads with poor track records to the most dangerous driving destinations in the U.S. We've also found five destinations that are a delight to drive, from shiny European superhighways to some of the finest roads in the Americas. So, whichever direction you're headed in, buckle up and have a safe trip.

SEE THE BEST PLACES TO BE ON—AND OFF—THE ROAD

Johannesburg
Carjacking capital of the world
South Africa has some of Africa's most beautiful coastline, a stunning subtropical climate, and an abundance of wildlife. It also has one of the world's highest rates of carjackings. According to police statistics, 10,627 carjackings occurred in the country of 50 million last year—half in tiny Gauteng Province, home to Johannesburg and Pretoria. But before you cancel your flight, keep in mind that most victims are not seriously injured and that there are things you can do to decrease your carjacking odds. The situation is so dire that residents can legally attach small flamethrowers to cars to repel carjackers (this is definitely not standard on rental cars). Less extreme precautions include watching for signs marking "carjacking blackspots or hotspots," keeping doors locked while driving, and not stopping for apparent accidents, vehicles that have broken down, or even cars with blue lights—they're not necessarily police. Weigh up whether to stop at red lights in high-risk areas, especially at night; risk a fine instead of a hijack. More than 8.3 million people visited South Africa last year, over 432,000 of them from the Americas. Well over a third of those visitors from the Americas were repeat visitors, proving South Africa's appeal outweighs its potential risks.

Mississippi
The nation's most dangerous roads
If you're making for Mississippi, slow down and buckle up. Statistically, with almost 27 road deaths per 100,000 Mississippians, the state languishes at the bottom of the list in the U.S. when it comes to safe roads. Unlit rural roads, high speeds, and lack of seatbelt usage are prime culprits. More than half of those who died on Mississippi's roads in 2010 were not wearing a seatbelt and, according to a Reader's Digest study, Mississippi was one of the deadliest states due to speeding. It is also one of 11 states where texting while driving is not against the law (though it is illegal if you are driving with a learning permit or temporary license). The state senate approved bans on texting as well as using handheld phones while driving in 2011, but the bills were rejected by the House Judiciary Committee in July 2012.

Back Roads of Bolivia
Some of the world's most perilous back roads
The quality of back roads of Bolivia is far from what we're used to in the US. The landlocked South American nation's thoroughfares tend to be narrow, two-lane roads with bone-jarring potholes, no shoulder, aggressive drivers, and a melee of donkeys, ox carts, dogs, horses, and pedestrians sharing roadways. One—North Yungas Road—has been nicknamed "El Camino del Muerte." In other words, Road of Death, due to the shocking numbers of buses, cars, and trucks that have plunged over the edge and into the valleys below. Clinging to near sheer cliff-faces, with no guardrails and 2,600-foot drops yawning below, the road has become notorious for its high death count. A sliver of a 43-mile track built by Paraguayan prisoners in the 1930s, El Camino has claimed thousands of victims as it snakes its way round hairpin bends from capital La Paz to the Amazon town of Coroico.

Pennsylvania
The deadliest animal in North America
Every year, there are about 1 million collisions with deer on U.S. roads, more than 100,000 of them in Pennsylvania, where the odds of hitting a deer are one in 86. The deadliest month for deer collisions is November, when male deer have fighting and mating on their minds. So turn up your high beams and watch for posted deer crossing signs, particularly between 6 and 9 p.m. While deer hit the headlines in Pennsylvania as well as neighboring West Virginia, Alaska had a grim bumper winter for moose collisions. By February, over 600 winter moose collisions had been recorded. Back on the East Coast, New Hampshire is a bad state to be a moose, with around 250 moose-car encounters annually; a hefty figure considering the state's moose population is only 6,000 strong.

India
Roads with the most chaos—and the most cows
Notorious for its chaotic traffic, India might well be the most terrifying place to drive. Gargantuan traffic jams, six cars crammed into the three lanes, and a complete disregard for traffic signs and markings: These are just a few of the travel hazards you'll face on India's city streets. The noise of car horns is deafening as streets seethe with cars, cows, mopeds, bikes, and pedestrians. Outside the cities, ancient, precariously held-together vehicles hurtle along poorly maintained roads at breakneck speed. Drivers often leave car lights off at night when driving poorly or unlit streets and sometimes shut off engines completely when going down hills. If you have to drive in India—it's an experience you'll never forget.

Canada
First choice for first-time driving outside the U.S.
An ideal choice for first-time driving outside the U.S., our neighbor to the north drives on the same side of the road as we do and road signage is in English in 12 of Canada's 13 provinces and territories. The exception to this is the staunchly French-speaking province of Quebec, where other than some bilingual signs in Montreal, road signs are exclusively in French. Canada's roads are safer than south of the border, with a 8.8 in 100,000 chance of being killed on the roads, compared with the U.S., where odds are 14 in 100,000. Just remember that road signs are in kilometers, not miles.

Germany
Life in the fast lane
If you think driving in Germany involves careening along hair-raising (or exhilarating, depending on your attitude) 20-lane, speed-limit-free autobahns, think again. In fact, a third of the autobahn has speed limits—some as low as 37 mph—and many look much like four-lane highways back home. Almost 2,000 miles of the nearly 8,000-mile autobahn network has "dynamic speed limits," adjusted to match traffic and weather conditions. Whether you're in a section with a speed limit or not, Germany keeps roads safe with strict rules, including stringent vehicle inspections, obligatory third-party liability coverage, and a point system that keeps dangerous drivers off the road. All cars must carry specific safety and first-aid equipment, and switch to snow tires in winter—or face steep penalties. Once you've got all that in place, driving in Germany is a pleasure; roads are impeccably maintained using high-tech road scanners, and feature landscaped medians, long acceleration and deceleration lanes, gentle curves, and freeze-resistant surfaces. You might just want to slow down to enjoy the drive.

Italy
Working to become one of Europe's safest places to get behind the wheel
Given myriad movie images of chaotic, narrow, twisting Vespa-crammed Italian streets, it might be a surprise to see Italy listed as a safe place to drive. But Italy has successfully put the brakes on the once-soaring road accident and fatality statistics that even provoked Pope Benedict to issue "Ten Commandments" for safer driving. Now, Italy has raced from a position as one of Europe's more dangerous places to be on the road (or sidewalk) to one of its safer options. New laws introduced heftier fines for driving with blood-alcohol levels of 0.05 percent or for being on the road without a reflective safety vest in your car. Now, convicted drug users have their licenses revoked if they are caught driving under the influence of drugs. Whether it's the new traffic laws or the might of the Pope's car commandments, deaths on Italian roads have decreased 43.7 percent in the last decade.

Panama
Some of Latin America's safest roads
With 1,000 miles of coastline, 1,500 islands, and 954 bird species, you're going to want to drive to see this stunning country of 2.8 million. It has a land area smaller than South Carolina, so you can easily drive to a slew of scenic spots; the canal is just 20 minutes from Panama City, while the rain forest is a 45-minute drive, and Pacific Coast beaches are only 90 minutes away. With the exception of gridlocked Panama City, Panama has some of Latin America's best roads. The modern, four-lane Pan-American Highway crosses the western side of Panama, from the capital to the second-largest city, Colón, with a plethora of gas stations and eateries en route. Once you veer off the major highways, however, roads are not always well maintained. That said, there was a 47 percent decrease in road accidents between 2010 and 2011 according to the National Department of Transit, and continuing efforts are underway to improve roads, plus plans to install helpful road signage toward sites of interest to visitors.