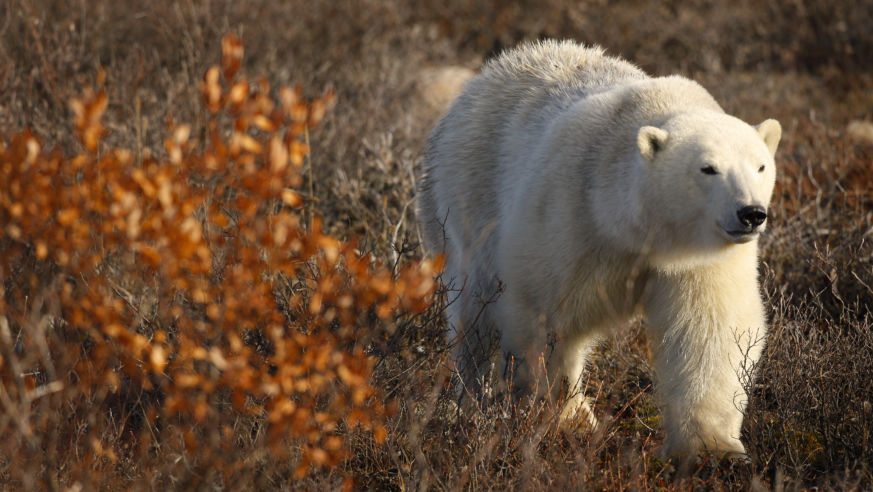 Elsa Bailey finally got to see polar bears in the wild, checking off another ambitious travel bucket list item after her 100th birthday.

This article was written by Emily Deemer of Natural Habitat Adventures.

Elsa Bailey made national headlines last May by celebrating her 100th birthday at Colorado’s Arapahoe Basin—on skis. She may have hung up her ski boots for good that night, but she sure didn’t hang up her thirst for adventure.Bailey is still crossing items off her ambitious travel bucket list, which until recently included a dream of seeing polar bears in the wild.

This spunky 100-year-old’s dream became a reality when she traveled to Churchill, Manitoba, as Natural Habitat Adventures’ guest this past October. She spent four days tracking polar bears in the tundra outside Churchill, a small Canadian frontier town known as the Polar Bear Capital of the World.

One day while Bailey and her group were traversing the tundra, a couple of curious bears approached. Bailey eagerly traced their every move from the outdoor viewing deck of the massive Polar Rover—a vehicle designed to traverse the rugged terrain while keeping guests warm and toasty in the sub-arctic temperatures.

“We just stopped, and the bears came over! The bears are so used to the Polar Rovers that it didn’t bother them at all,” Bailey told a reporter for the Winnipeg Free Press who was covering her adventure.

“It was two male bears, and this time of the season the male bears very often tolerate each other.They talked a bit to each other, and then one of them tried to climb up on the great big tremendous tire of the Polar Rover!” Bailey recounted. (This is the why Polar Rover tires are six feet tall!)

Natural Habitat Adventures (NHA) first connected with Bailey when staff member Becky Pahl was on the ski slopes at Arapahoe Basin last May and noticed quite a commotion at the bottom of the hill. She skied toward the party, and saw Bailey making seasoned turns on skis. Pahl was amazed to learn that Bailey was celebrating her 100th birthday.

When Pahl turned on her TV that night, she saw Bailey being interviewed on the local news. Bailey told the reporter she still had items on her bucket list, and seeing polar bears in the wild was at the top. Pahl immediately told NHA’s president, Ben Bressler, and within the week she was driving down to Bailey’s Colorado Springs home to surprise her with a belated birthday present—a trip to see polar bears with the company.

“I wanted to do this for years, and all of a sudden it just manifested,” Bailey told the Free Press.“They asked me what I wanted to do for my 100th birthday, and I said I wanted to see the polar bears.I’ve seen them on TV, but this just feels different, when it’s real.”

NHA staff member Andrea Reynolds was Bailey’s personal escort for the week.“When the opportunity came up, I jumped at the chance,” says Reynolds.  “It was an exciting prospect to spend time with this ‘100-year-young’ woman who has inspired so many in our office.”

Another highlight for Bailey was their dog-sledding excursion, as it reminded her of the winter she spent living in Alaska when she was 50, where the dog-sled was her preferred mode of transportation.

So, that brings me to my question: Could it be that travel is the secret to living to 100+?  Bailey seems to prove this theory.

The other travelers in her group were treated to a daily dose of inspiration as they watched Bailey take on each day’s activities with vigor and enthusiasm—she even got up in the middle of the night to watch the northern lights, twice!

“She showed us that one of the secrets to living to 100+ is shooting for the moon, and embracing each and every moment,” said Reynolds.

What’s next on Bailey’s bucket list? Yellowstone, America’s oldest national park. She says she plans to travel there with Natural Habitat Adventures this summer to see bison, moose, and wolves. We can’t wait to see where your 101st year takes you, Elsa!

We want to know: what's the most ambitious item on your travel bucket list and have you checked it off yet? Tell us about it below!