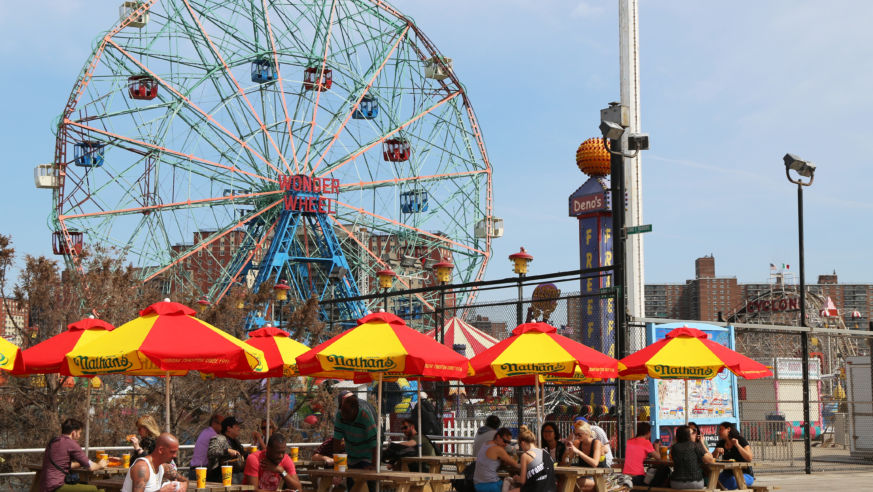 It's been one year since Hurricane Sandy, and we’ve got the inside scoop on how six of the Northeast's most popular destinations have bounced back—and why you should visit them now.

It's almost impossible to shake the dramatic images of waves crashing over Casino Pier's iconic roller coaster after it was pushed into the Atlantic during Hurricane Sandy. Our hearts broke with the news of entire communities throughout the east coast being ravaged by ferocious floods and in the unfortunate case of Breezy Point, NY, unstoppable fires. Despite such suffering and turmoil, people came together to help each other, communities worked together, and one year later, things are looking a whole lot better. While so much work still needs to be done in many of New York and New Jersey's residential areas, several popular destinations have bounced back. From the Hamptons to the Jersey Shore, here are six popular places that survived the storm and why you should pay them a visit.

CONEY ISLAND
Despite the storm, Coney Island's signature amusement park, Luna Park, was able to open its summer 2013 season right on schedule, thanks in part to hundreds of volunteers from all five boroughs who came together to help rebuild the area's playgrounds, streets, churches, and iconic boardwalk. Luna Park recently unveiled Water Mania, a new ride similar to Disney's Tea Cup attraction that lets visitors spray water cannons at other riders as they spin around. Luna Park will open two new rides this summer, and plans to bring back the Thunderbolt, a 125-foot tall, 2,000-foot long roller coaster that will reach speeds of up to 65 miles per hour, in 2014. Pay a visit to Coney Island's timeless attractions, brave the almighty Cyclone, and take a ride on the historic B&B Carousel in the newly christened Steeplechase Plaza. If all else fails, you can always stop for a bite at Nathan's Famous, home of the original Coney Island Hot Dog.

ATLANTIC CITY
Contrary to popular belief, Atlantic City was not hit hard by Hurricane Sandy last fall and was actually back on its feet within a week of the storm-in fact the area still continues to bounce back post-Sandy with new openings and events along its iconic stretch of New Jersey coastline. The Tropicana Casino and Resort opened six new restaurants and AC's iconic Steel Pier debuted eight new rides this summer. Ultra-chic hotel Revel also opened its new HQ Beach Club over Memorial Day weekend, a nightclub modeled after the posh décor of Mykonos that features pools, bungalows, bars, DJs, and a new dance floor. For free family-friendly entertainment, don't miss AC Dreamin', a new 3-D light show featuring catchy music and creative, thought-provoking images against the façade of Boardwalk Hall every half hour between 8 p.m. and 11 p.m nightly.

LOWER MANHATTAN
While images of the New York City subway system overflowing with floodwaters might still come to mind, it's important to remember that things are for the most part back to normal in Lower Manhattan. Shop for farm fresh produce at one of the Greenmarkets Downtown-try the Bowling Green Greenmarket at Broadway and Battery Place every Tuesday and Thursday from 8 a.m. to 5 p.m. thru Dec. 26th, or the Staten Island Ferry Terminal Greenmarket, every Tuesday from 8 a.m. to 7 p.m. thru Dec. 31st. Treat the family to a picnic in Battery Park with views of the Statue of Liberty or take advantage of the City's new Citi Bike Stations and take a bike tour Lower Manhattan at your own pace.

MONTAUK AND THE HAMPTONS
While Long Island didn't receive as much television coverage during Sandy compared to other places, Montauk, the Hamptons, and most of Long Island's beachesendured large amounts of flooding and beach erosion as a result of the storm. Trees fell, water rose, and power outages were rampant. Luckily, one year later, the beaches are in much better shape. According to an article byCurbed Hamptons, $700 million was recently approved by Congress to go towards rebuilding Long Island's South Shore, namely Montauk, Hampton Bays, East Quogue, and West Hampton Dunes Village-East Hampton Town is bringing in roughly 10,000 yards of sand to support Ditch Plains since the project reportedly won't begin until late next year.

THE JERSEY SHORE
If New Jersey's Stronger than the Stormcampaign is any indication, the Jersey Shore has bounced back from the effects of Hurricane Sandy with courage, style, and grace. This summer, the beaches were open from Long Beach Island all the way down to Cape May and area hotels, B&Bs, restaurants, and shops are eagerly awaiting your visit. Check out the Stronger Than The Storm Fall Guide for a list of haunted houses, hayrides, corn mazes, pick-your-own pumpkin and apple farms, and the best places to see fall colors. 26 B&Bs and Inns along the Jersey Shore are also participating in Back Inn Business, a campaign offering 10 percent off rates for Sunday-Thursday stays this October in honor of the one-year anniversary of Hurricane Sandy.

STATEN ISLAND
Here's a novel idea: take a free ride on the Staten Island Ferry from Manhattan and actually stick around to explore the fifth borough before heading back to the City. There's a lot going on in Staten Island. History buffs shouldn't miss the chance to explore Fort Wadsworth, one of the oldest military sites in the country, Historic Richmond Town, an 11-acre living history museum on New York City's oldest farm, and Sandy Ground, a community settled in the 1800s by freed slaves from New York, Delaware, and Maryland that later became an important stop on the Underground Railroad. Visit the Jacques Marchais Museum of Tibetan Art, the Garibaldi-Meucci Museum, and the Snug Harbor Cultural Center for a taste of culture on one of New York City's most culturally diverse boroughs.