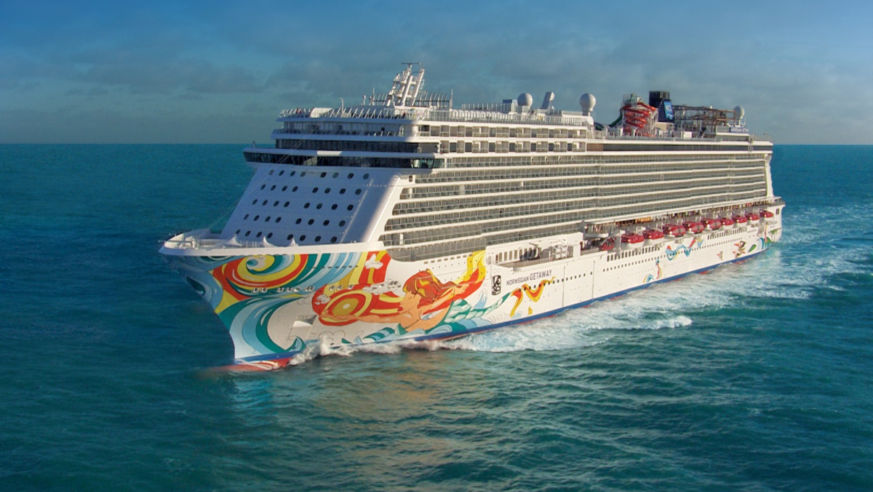 This article was written by Sherri Eisenberg and originally appeared on Fox News Travel.

What’s it really like to be at the helm of one of these mega cruise ships? We caught up with Captain Rune Myre, 17-year veteran of Norwegian Cruise Line and the captain of the Miami-based Norwegian Getaway.

Born in to a fishing family in northern Norway, Myre has spent his career at sea. In 1998, joined Norwegian Cruise Line and worked on many of line’s ships, including the Norwegian Sea and Norwegian Dawn and captained the Norwegian Pearl before taking the helm of the Norwegian Getaway.

Myre oversees every aspect of the massive 3,969-passenger vessel and its 1,700 crew.

Since setting sail in 2013, the Norwegian Getaway has gotten rave reviews for its family-friendly features and celebrity chef restaurants, among other things. For Super Bowl XLVIII, the ship was transformed into a floating Bud Light hotel with football parties and celebrity appearances.

On a recent trip, while docked in St. Thomas, he took a few minutes out of his busy day to talk to us about what isn’t a 9 to 5 job.

FoxNews.com: What are some common preconceptions about your job?
Myre: I don’t think a lot of people think about what goes on behind the scenes on a billion dollar ship. Every week, you meet four and a half thousand new people. You’re responsible for the safety and security of, on a ship like this, 6,000 people. The crewmembers are 70 different nationalities. It is a challenge.

FoxNews.com: People get hurt and die on cruise ships. What's the hardest thing about your job?
Myre: When things happen to crewmembers’ families and you have to get them home.

FoxNews.com: What's the coolest thing that has ever happened to you on a ship?
Myre: For me it was a great honor and pleasure to take out the ship. We then had the Super Bowl in New York, and then the christening in Miami with Pitbull (singer Armando Christian Perez), and I got to meet the guy. He is cool as cool can be.

FoxNews.com: What's the most surprising thing that has ever happened to you on a ship?
Myre: I’ve been to births and deaths. We had a child birth once that was amazing.

FoxNews.com: What's your favorite port to sail into?
Myre: I love Alaska, and I have done eleven seasons in Alaska. It is like being home [northern Norway]. The ports all look the same—the mountains, the ice caps. It’s special up there.

FoxNews.com: What is your least favorite port to sail into?
Myre: The ports have developed during the years; 15 or 16 years ago I could have answered that question but now all of our ports are good. The Caribbean is nice because of the weather, but I will say that there are a few ports where there are too many ships. That’s the only negative: There are too many people walking around the streets. Some passengers might feel that it might be a little crowded during winter season.

FoxNews.com: What do you like to do when you have extra time in port?
Myre: I normally get off the ship in St. Thomas for a couple hours. I go for a walk, and get some fresh air, and go for a good hike if I have time. In St. John I went snorkeling; Megan’s Bay Beach in St. Thomas is beautiful. There’s also the airport in St. Martin where the planes land just over the beach, so you can watch the planes.

FoxNews.com: What do cruisers often miss out on when they're at sea that captain's notice?
Myre: A lot of people are hanging around the pool deck, listening to music, chilling, climbing the walls, whatever. I see birds, flying fish, dolphins, and sometimes a whale.

FoxNews.com: What is the best experience you have had with a cruiser?
Myre: I am not the kind of guy who gives out my personal information right away, but I have people every week that I know from other sailings.

FoxNews.com: What is the worst behavior you have seen from a cruiser?
Myre: If you live in a city of 6,500 people things are going to happen. People misbehave because they drink too much or have a disagreement with their spouse. I have seen fights during my career, it happens, and we deal with it. We have security onboard and procedures for everything.My position in a town like this is like the mayor, and I have a police force. People are here to have a great time, and that’s what people do. We don’t have much trouble.

FoxNews.com: What is your best advice for cruisers?
Myre: If you come onboard a ship of this size, go to information meetings, learn about the ports. We have a lot of information onboard, and it takes time to get to know the ship. The people who want to experience the most in the week that they’re here have to get the brochures.

FoxNews.com: What is your favorite thing about the ship you are on today?
Myre: I like the Illusionarium, which is a magic show. It is a great experience. Every friend who comes onboard I personally book in Illusionarium. I have been 15 times, and I am trying to figure out how they make the birds disappear! I don’t want to ask them, I want to figure it out.

#IWillComeToTunisia: Tourists pledge to visit the country following the attack

Are you a MAMIL?