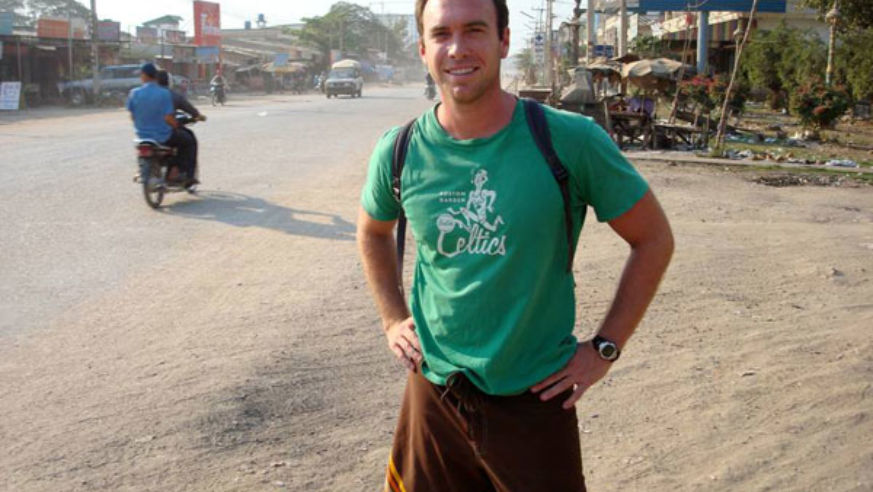 Courtesy ATWFF/WGN America
Alex Boylan during his travels this year

Alex Boylan, who won CBS's The Amazing Race 2, knows how to push the bounds of budget travel. Alex's latest project is Around the World for Free.

For half of the year, he and a video producer traveled the world as backpackers, reporting in for regular live appearances on the CBS Early Show. Viewers were told to visit the website AroundTheWorldForFree.com and tell Alex where he should travel next. The goal was for him to rely on the kindness of strangers and not pay for any part of his trip.

Now Alex and his team have edited the video shot during the journey through 16 countries—from the rural parts of the Dominican Republic through the backstreets of Calcutta to Kenya during political unrest. The resulting TV series will air on WGN America, starting in January.

I recently spoke with Alex about what he and his producer Zsolt Luka witnessed and learned, plus his advice for budget travelers. Here's what he had to say:

Money can be a crutch that insulates yourself from cultural immersion. While what I was doing was unusual, the same rule applies to everyone. When you’re traveling cheaply, you’re forced to interact with the locals and really put yourself out there emotionally day after day, and that’s the truly broadening part of travel.

To find out where’s the best restaurant or the liveliest bar, ask a local, ask a local, ask a local. It's a cliché but its true. It's the critical piece here, but when you're traveling, don't ask the hotel concierge and don’t ask the leader of your walking tour or the information desk for the tourist office. During my trip, I would be asking someone—like the lady behind the counter making the tacos—“where do you go for dinner” or “where do you go for fun.” She didn’t know who I was and there was no camera equipment around or anything unusual about me. I was just a 30-year old from out of town. And she gave me great advice. Locals will just naturally guide you to the most authentic experiences and culture.

On our trip taping this show, we walked from Thailand to Cambodia, walking down dusty roads, a monk with broken English invited us into a hut. It was spontaneous generosity. When we were in the Maasai Mara in Kenya and Tanzania, we met with a guy named Freddie where we were staying. He says, “my boss has this campground in the park that you should check out.” We agreed. He drove us there, and we passed through a Maasai warrior camp, with young guys carrying spears. It was real life. We'd never see it on typical travel TV documentary or on a trip taken in a group with a tour guide.

The world is generally a safer place to travel in than many Americans realize. Media reports always play up the scary part. We went on this journey with a mindset that the world is a good place. We didn't seek outside security help of any kind. We relied on the locals we met to guide us about where to be safe, and when to scram. By making friends with them, they helped direct us. For example, when we were in Kenya, riots and protests broke out, but locals told us how to avoid the trouble spots. And crime wasn’t a problem for us. Even though we were traveling the world with this expensive camera gear and laptops in our backpacks, we never had anything stolen. It’s true that during the times when we had our camera out and we were shooting a scene, people were less likely to bother us. But most of the time we just looked like tourists. If we were safe, you will be safe, too.

Long-term travel is a personal choice, and obviously because I was filming a show this trip was not an interruption of my career. Having said that, I believe personally that it's important to take sabbaticals and get out and see what the world is like....before you have kids, but then once you have children, too. My parents every five or six years took my brother and sisters and me on long-term trips. When I was 12, for instance, my parents took us backpacking for three months, from Turkey to Scotland.

Long-term travel is also more affordable than you might think. It’s actually much cheaper than just traveling for a week. An apartment for a long-term stay has a much cheaper per day cost than a hotel, and you have a kitchen to save money on meals by not eating out. For three nights in a hotel in a lot of areas of the world, you could stay for a month for the same price and get much truer experience of where you're at. You also relax more and tune into yourself more. It takes time for your mind to forget about job-related worries. You need several days off before your mind settles down from your career and family concerns. Long-term travel allows you to truly unwind.

I’m incredibly proud of this show with only two people on the road shooting on the fly. I really believe that there's never been a show like this that reveals the world in such a dynamic way. Burton Roberts (producer) and WGN America were really visionary.

I think we’ve taken interactivity to the next level. Once upon a time, people thought it was a big deal that they could send in a text message and help determine which performer would win a prize on a show like American Idol. For our show, people were actually contacting us via our website and helping determine where we traveled and the people we met and vitally shaping our show. It was much more immersive.

Every night, Zsolt would package into five minutes the key video highlights of the day and post it on our website as a mini-episode. While he was doing post-production, I'd be online synching up our plans, reading messages from viewer/readers, choosing our next destination. Zsolt and I would figure out the logistics of where to go next, etc.

When I the six months were over, I was glad to take some time off. I missed being alone, just being able to read a book in my apartment all by myself. The other big thing was eating and having space, privacy. I only had three T-shirts and a couple pairs of pants while I was on the road. I didn’t mind that. But I felt like I was like being perpetually a guest. I always have to be "on" emotionally. The people who write in are excited about helping to shape our trip. They kept our spirits up and energized. But it’s been nice to have some downtime.

We’re developing our second season. What we don’t want to have happen is for the rawness to disappear. Take Survivor. I was hooked from first season because it was so real. But you look at it now and, well, I don't watch it anymore. It's lost its mystique because the rawness is gone. The people on the show are simulating their experience based on what they've seen other people who’ve been on reality shows in the past do. They’re not having fresh experiences. They’re re-enacting or mimicking other people’s experiences, more or less. And so we have to come up with a new twist on what we did when we launch a second season, to keep the element of surprise for the viewers and participants in the audience as well as for whomever undergoes the journey itself.

CORRECTION: This post has been updated to correct the spelling Zsolt's name. I regret the error. (Sat. Dec. 6, 14:09)

Program scheduling has not yet been set. We'll let you know when the show hits the air in January.

If you're fresh out of college, globetrotting for a year sounds great. But it's a lot scarier—and more fulfilling—when you already have a career. Here's a first-person account from Brook Silva-Braga: "Traveling the World to Reach a New State of Mind"