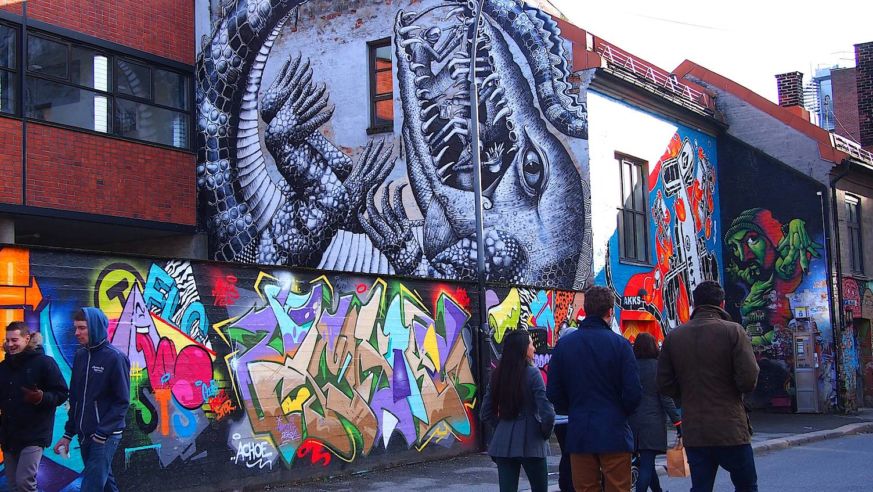 "Oh, you're going to Oslo? You know it's expensive, right?"

I can't tell you how many people told me that on learning I'd booked a week-long trip to the capital of Norway. Didn't they realize I live in New York City, one of the most expensive cities in the world as it is? It got so annoying that I made it my mission to do Oslo as cheaply as possible.

Getting there, and when to go

Norwegian Airlines currently leads the way in long-haul, low-cost carriers. I got a round-trip ticket from New York City to Oslo for $450. The price is so low because certain "extras," such as checked baggage and in-flight meals, are a la carte (but do you really want to pay for airline food anyway?).

The airline is proud of using Dreamliner jets, but not all customers get the chance to fly with them since their fleet is still quite small. Just make sure you know which airline your flight is being operated by—if your Dreamliner is switched to a different aircraft, Norwegian will issue a full refund, or let you re-book for free.

Most people think Norway is perpetually cold, so everyone usually comes in the late spring and summer. I wouldn't rule out a winter trip to Oslo, though. The city is charming all year round, and there are still a lot of things you can do both indoors and outside that will make you forget you're close to the Arctic Circle. Flights and accommodations are also cheaper in the winter, and no one is around. Seriously. Most locals will be like, "Oh cool, you're the first American we've seen since October."

The Oslo Pass includes entrance to over 30 museums, all public transportation, discounts at restaurants, and discounts or free entrance to some non-museum attractions, like swimming pools and ski parks, as well. It's one of the best ways to save in this city, especially if you plan on doing all of the touristy things you read about online.

The pass pays for itself in the walking tours. There's a different themed walk every day—do them all. I did a walk about Henrik Isben, Edvard Munch, and the Norwegian art scene, a tour of Ekeberg Park, and a tour of the Akershus Fortress. Each one goes for 150 NOK normally; the cost of a 72-hour Oslo Pass is 535 NOK, just a little more than the price of three tours. (Full disclosure: I was provided with a VIP pass from Visit Oslo; however, I still calculated the cost of a pass into my expenses).

This is by far the most expensive aspect of any Norwegian trip. Alcohol is heavily taxed here, so casual drinks at the pub after a long day of sightseeing is not realistic.

Norwegians are well traveled, but I think it's because once you leave immigration control, you're ushered into the duty-free-alcohol-free-for-all section of the airport where you can buy any kind of liquor on the planet. I bought a bottle of Aquavit, Norway's traditional drink, for less than 79 NOK. It lasted me the entire week.

While you'll see people in bars during the week, the weekends are when Norwegians go in Oslo. Start by pre-gaming with your bottle of duty-free alcohol, and then head to whatever bar or club looks fun. Treat yourself to one alcoholic beverage, and nurse that sucker—the cheapest bottle of Aass beer I found cost me 60 NOK, which is way more than I'd pay even in New York City.

There's an organized tour called the Oslo Crawl which, for 199 NOK, gets you a cocktail, a shot, and discounts on drinks at some bars and clubs around Grünerløkka. It's more of an excuse to hang out with other travelers and have fun than a legit pub crawl.

Or you could do something crazy, and just not drink at all. Some nights I was so tired from exploring the city, the last thing I wanted to do was get wasted. I didn't feel bad about it either.

It's estimated that most Norwegian adults drink an average of 1,000 cups of coffee year, so I opted to use my booze allowance instead towards purchases of the most amazing coffee I've ever tasted. A cup of black coffee will run you between 24 NOK and 34 NOK, but it's so delicious you won't need to upgrade to those fancy Starbucks-esque concoctions.

I splurged a bit on coffee from Oslo's famous Tim Wendelboe coffee house, but because it's more than just a cup of coffee—it's an experience. The brewmasters will entertain you with their good looks and coffee knowledge. Some of the Oslo Winter Walks also include a hot beverage after the tour, so you can try the coffee for free if you use your Oslo Pass.

After booze, food is the second most expensive thing about Oslo. Even something like a McDonald's Extra Value Meal will cost over 96 NOK. Most restaurant entrees run 169 NOK to 245 NOK, even for stuff like burgers and sandwiches. I obviously couldn't afford to eat out every day for that price, so I had to be creative. The solution? I brought my own food.

For $10, I packed boxes of macaroni and cheese, single serving bags of rice, some Knorr side dishes, individual cups of peanut butter, and a box of pasta. These are lightweight, non-perishable, and Customs-friendly items that take up very little space, even in a backpack. You can go even cheaper if you live off ramen noodles.

For another $15, I picked up vegetables, fruit, bread, milk, eggs, and some chicken breast at a local market. I cooked breakfast for myself every morning, packed peanut butter sandwiches and salads for lunch, and ate at home for three out of the six nights I was in Oslo.

I didn't want to deny myself the chance to taste Norwegian food, however. With the money I saved with the Oslo Pass and cooking at home, I was able to eat at some of Oslo's cheaper restaurants—reindeer cakes at Kaffistova (discount with Oslo Pass), smoked salmon at Fyret Mat and Drikke, and fresh trout at Restaurant Schroeder are good picks for meals that will cost less than 149 NOK. There are farmers markets on the weekends where you can load up on samples of cheese, smoked fish, bacon, and more, or pick up an elk burger for 80 NOK, or a pancake and a coffee for 50 NOK.

You can save even more money by going vegetarian, eating pizza, doner kebabs, or heading to the café at the Grünerløkka library, where you can get a slice of pizza, a chicken roll, a waffle, and some other snacks for less than 20 NOK (that's like $3, say WHAT?!).

I took the Flytoget high-speed train from the airport to the city center; the express route is 19 minutes long, and you can get a student ticket for 85 NOK. It's an awesome experience, super clean, has free wifi, and you get to see a bit of scenery.

Oslo's infrastructure is insane. They have trains, buses, trams, a metro, and ferries—all of which you can use for free with the Oslo Pass (for Zones 1 and 2), or any of their regular transportation passes.

Oslo is also an incredibly walkable city. The streets are clean, the architecture is gorgeous, and there's a lot of nature even within the city. I never took the metro because I enjoyed walking the streets so much.

Oslo doesn't have the same hostel culture as most other European cities. There are a few places, like the Oslo City Hostel and the Anker Hostel, which offer dormitory beds starting at 230 NOK a night. The cheapest hotels are the Anker Hotel and the Comfort Hotel Xpress, starting at around 579 NOK a night. Couchsurfing is an obvious choice for a free night's rest, and in the warmer months, you can camp for free at Ekeberg Park.

I knew I'd be working while in Oslo, so I opted for an apartment through Airbnb. For $485, I got a studio apartment with kitchenette and private bathroom, in Grünerløkka, for seven days. I could have cut costs even more by splitting the place with a friend or renting a room in an apartment elsewhere. I was able to check in when I wanted, come back and crash when I needed, and had a quiet space to work. Those little conveniences are worth any extra cost above that of a hostel or camping.

Oslo is often seen as a "stopover" city, en route to Fjord Norway, or other places in Europe. Most people don't spend more than a few days there, and my friends were skeptical I'd be able to occupy myself for an entire week.

I found Oslo to be incredibly stimulating though. The Oslo Pass is what really helped me avoid boredom. I didn't even get through one-third of the things that were included.

If you can't justify the cost of the Oslo Pass (which is dumb, but oh well), there are still tons of things to do in Oslo that won't cost you a single dime:

• Visiting Vigeland Park or Ekeberg Park
• Island hopping through Oslofjord
• The comic book section of the Grünerløkka library
• Free tours of Parliament on Saturdays
• Art galleries often host shows that are free and open to the public.
• Hiking and nature stuff—there are tons of trails all around the city.
• Free concerts with the Frank Znort Quartet on Sundays
• Most of the museums are free on Sundays—some, like the Armed Forces Museum, Norwegian Museum of Magic, and the Intercultural Museum, are always free.
• Creativity walks—many Norwegians will walk around the city, with no purpose other than to enjoy their surroundings. Take a cue from them and enjoy the environment, or hone your photography, sketching, or writing skills.

I suggest doing a bit of research before you make an itinerary (or decide to be spontaneous), however; depending on the time of year, some attractions and museums are closed (especially on Mondays).

Because of my planning, I spent an average of about $50 a day in Oslo. My total cost for a seven-day trip, including flights, lodging, food, activities, and souvenirs, came out to $1,285.

Oslo, of course, isn't Southeast Asia or South America cheap, but it's not so expensive that you'll end up selling your kidneys to get back home. My advice is this: If you're willing to spend money on a trip to New York City, Tokyo, Moscow, or London, you can definitely afford a trip to Oslo.

*Conversion rate at the time this story was written: 1 USD = ~ 6 NOK

This article was written by Katka Lapelosa and originally appeared on the Matador Network. It has been republished here with permission. If you liked this article, check these out, too:How to Travel Iceland on a Budget, How to Budget Travel in Cuba, and When Your Boyfriend Travels Abroad to Propose to You.