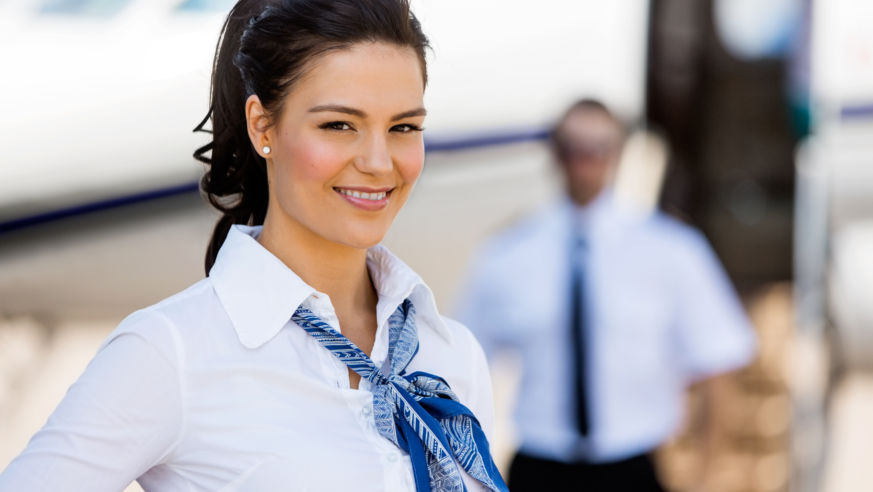 This article was written by Sid Lipsey and originally appeared on Yahoo Travel.

Related: The Craziest (and Rudest) Things Ever Said to Flight Attendants

“If you are pleasant in return, you will always receive the best hospitality,” says flight attendant Emily Witkop. “[Unfriendly passengers] will receive good service too, but we are less likely to go out of our way for people who are rude to us.”

And that’s yet another secret about flight attendants: you don’t need grand gestures to win them over. Keep in mind, they have to deal with drunks, obnoxious flyers, people with impossible requests, squabbling seatmates, creepy dudes hitting on them, and passengers who complain to them about the weather (yes, that actually happens). So simply treating them with the basic manners you learned in kindergarten is enough to make the average flight attendant think you’re the best thing to happen to airplanes since the jet engine.

“Manners and etiquette go a long way towards gaining the respect and in turn reciprocal courtesies from your flight attendant,” says ex-stew Tami Gayikian. “It’s simple but lost in today’s world.”

Here are the 10 Ways You Can Get On Your Flight Attendants’ Good Side:

This is your first, best chance to make a good impression on your flight attendants: saying “Hi” to them as you board the plane. You’d be surprised how few passengers pass this very important courtesy checkpoint.

“When people board the airplane, two-thirds of the passengers don’t even acknowledge you,” says flight attendant and blogger JetSet Betty. “They just walk right past without so much as a glance, forget to something nice to say or even a smile.”

“We literally can see thousands of people a day and a good percentage have their 'airport faces’ on [when they get on the plane]—the bored, impatient glazed-over stare,” says flight attendant Betty Thesky (no relation to JetSet Betty), host of the podcast “Betty in the Sky with a Suitcase” and author of the book of the same name. “They board the airplane with barely a grunt when we give them a chipper hello.”

Well, the flight attendants aren’t just “Hello” robots; they enjoy being greeted, too. “I appreciate the people who come in and say hello and make eye contact,” says JetSet Betty. “Simple.”

“Someone who actually acknowledges us when we greet them and speak to them,” is one of flight attendant Hugh Bonafield’s favorite types of passengers. “Just coming on with a positive attitude generally is all it takes to win me and most flight attendants over.”

What impresses flight attendant Sarah Steegar? “If I see a passenger being helpful without even being asked, like moving seats for another passenger or helping someone with their bag, they’re golden,” she says.

Even if you’re not usually a nice person, try faking it during the flight. Because if a flight attendant sees you being a mensch, they’re going to think you’re a mensch—and you’ll automatically be in their good graces.

Flight attendants aren’t immune to the instant gratification offered by treats—especially those of the sweet kind.

“I’m not saying you should bribe your crew, but who doesn’t like treats?,” asks Witkop. She and some of the other flight attendants we talked to tell Yahoo Travel that when they fly as passengers, flight attendants traditionally bring chocolate and treats for members of the crew. And they don’t object when a non-flight attendant does the same.

“A rare person will give us a bag of M&M’s and say, 'This is for the crew,’” says Betty Thesky, who says you might get a little something in return for your generosity. “If there is something we can do for that passenger we will, such a free drink or free headset or at very least a bunch of thank yous,” she says.

“What really tempts me into giving free snacks and drinks is when passengers bring us desserts,” says Sydney Pearl, author of “Diary of a Pissed-Off Flight Attendant.” “It’s always unexpected and really makes our day. I have had passengers bring homemade brownies, bakery style cupcakes, candy bars, bags of candy, you name it.”

Related: Be an Airport Ninja—10 Insider Secrets for Airport Survival

This is part of the whole “flight-attendants-are-human-too” theme. Our flight attendants consistently tell us that they notice attractive or well-dressed passengers. “A cute passenger always drank for free,” admits ex-flight attendant Keith W. McAndrew.

McAndrew also says people who were especially nice or were celebrating an anniversary, birthday, or other special occasion also received that courtesy.

“I love seeing a passenger flash me a smile, ask me how I am, and then make a joke,” says flight attendant Kara Mulder creator of the blog, “The Flight Attendant Life.” “I’ll remember them and look out for them if I can."

"Personally, I love a sense of humor.” says JetSet Betty. “If someone can make me laugh, they are instantly my new favorite person. Say something witty and fabulous or just make fun of yourself; it all works and we will be best friends before the flight is over.”

Give them a card

Sometimes all it takes is a gesture as simple as a card to make a flight attendant’s day. On a flight during last week’s 9/11 anniversary, one of Morgan Reed’s fellow crewmembers received a special card from a passenger. "It’s probably the sweetest thing I’ve seen thus far,” says Reed.

Says Hugh Bonafield: “I once had a little girl give me a hand-written card thanking us for keeping them safe. That was over a year ago, and I still carry it in my bag!”

Serve in the military

“The other way to get great service is to wear your military uniform,” says Betty Thesky. "Gate agents will let service members board first. We will try to give them something for free or move them to a better seat if we can. Flight crews have a special affinity to the armed services and we will sometimes make an announcement expressing our thanks or ask all the others passengers to stay seated to let them deplane first.“

Passengers who give props to men and women in uniform also get props from flight attendants. "When I see a passenger give up their expensive first-class seat to a service person, it tugs at my heartstrings,” says Thesky, “and reminds me that there are all sorts of everyday heroes out there."

Being a flight attendant is a tough job, so anything you can do to lighten their load is much appreciated.

"It always helps if passengers go to the aft galley if they want a glass of water or need to throw something away, instead of ringing the call bell,” says Kara Mulder.

Ex-flight attendant Tami Gayikian advises you to “keep your common area clean free of trash and try not to leave your seat when the cart is in the aisle, unless you absolutely have to.”

JetSet Betty is a stickler for manners. At work, she actually wears a button on her apron that says, "Manners are Sexy.” One way to be a well-mannered passenger is simply by asking for things nicely. “If you missed the food and/or beverage service, preface your request with 'When you get a chance/If you have time/I’m an idiot, I know,’ and then add the 'may I please have a _______?’” she says. “Works every time.”

Flight attendants are not air waiters and waitresses; their primary job is your safety. It’s a part of the job flight attendants take very seriously, and they very much appreciate it when passengers do, too. That means following their instructions.

“We don’t walk around barking orders for no reason,” says flight attendant Michelle Lazzaro. “When we ask you do do something there is a reason behind it.”

Adds JetSet Betty: “If we ask you to do something—i.e. put your seat belt on, turn off your computer and put it away blah blah blah—it is because we are required to do so. We don’t make this stuff up; the FAA does. The rules are there for safety reasons. So don’t roll your eyes, sigh heavily and put your 'just a second’ finger up. Just do it—unless you want to get an even bigger eye roll, heavier sigh and a much different finger!

Related: Secrets of the Skies: Flight Attendants and Pilots Tell All

You know that saying, you catch more flies with honey? That works with flight attendants. If you forget everything else, the best way to get on the flight attendant’s good side is just to be nice. "Genuine compliments are always welcome,” says Sydney Pearl. Adds Michelle Lazzaro: “When a passenger says 'please’ and 'thank you,’ that alone sets the tone which in return makes us want to go out of our way for someone just for the simple reason of being polite.”

“I know it sounds simple, but you wouldn’t believe how many people are just downright rude to flight attendants, for no reason at all,” says flight attendant Tyler Herrick. Regardless of how rough your trip is, how much grief you got at the ticket counter, how much you were groped in the security line, he asks that you not take it out on your friendly neighborhood flight attendant. “A respectful passenger is going to get a lot more out of us as a group than someone who is rude or demanding things,” he says. “It sounds so simple right? That’s because it is!”