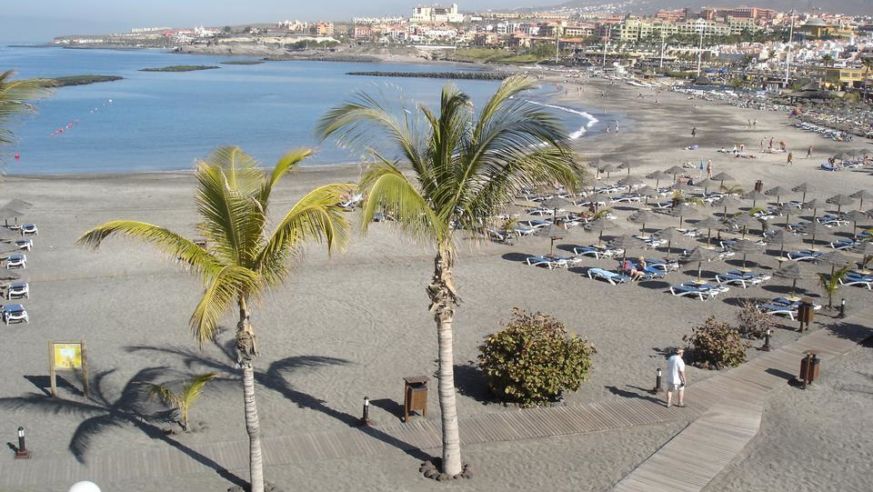 This article was written by Brittany Jones Cooper and originally appeared on Yahoo Travel.

When I told my friend Lindsey that I was going on a trip to Tenerife, she reluctantly asked, "Where is that?"

"It's in the Canary Islands," I replied.

"That sounds like a made-up island," she laughed. "You're making it up."

In reality, five million tourists travel to Tenerife every year. Specifically, Europeans, who in just a few hours are able to enjoy the subtropical climate of this very real and very beautiful island. Germans, Brits, and Spaniards are the main visitors to Tenerife, and they flock to the island the same way Americans migrate toward Florida or Mexico once temperatures start to drop. After all, the island is just a two-hour flight from Madrid and about 4.5 hours from London and Frankfurt.

But for many Americans, Tenerife not only sounds like a made-up place—it sounds like a faraway land (it's about a nine hour flight from New York). And I must admit, before my visit I didn't know much about the island, including the correct way to pronounce its name.

Tenerife (pronounced TEN-er-reef in English) is the largest of the Canary Islands, situated just west of the North African country of Morocco. But while its location suggests African influence, this little island is a part of Spain, and the food and culture proudly reflect their Spanish origin.

More: 12 people who should be banned from flying

Tenerife is easily divided into two different regions, the north and the south. And although they share an island, the two areas couldn't be more different. Landing in the north feels like lying in a lush blanket of trees and vegetation. This area sees heavier rain, so naturally it's home to sprawling vineyards, banana plantations, and local farms. There's also an array of black sand beaches that are both beautiful and a bit shocking when you see them for the first time. The weather is more temperate, and for the most part, locals make up most of the population.

The north is also home to quaint Spanish towns like Garachico. Nestled in the northwest corner of the island, Garachico is a must-see for anyone looking for a quiet escape. On the shore, there are natural pools where tourists and locals can swim when the tide is low. For those who are less adventurous, it's also a great spot to watch the sun set as the waves splash against the rocks. In town, I enjoyed strolling along the cobblestone streets while snapping photos of the colorful Spanish-style houses and churches. It felt like going back in time, in all of the right ways.

Dining on the north side can also be a thrilling experience. "Tenerife offers authentic cuisine blessed with an array of intoxicating flavors," said Rashida Petersen from Turismo de Tenerife. "Traditional dishes are characterized by their simplicity and freshness thanks to locally produced ingredients such as fish, potatoes, or bananas."

And that's the first thing I noticed. I didn't eat one prepacked processed meal during my entire stay. The food was fresh because much of it is grown on the island or pulled out of the ocean that day. I dined at a little restaurant called El Calderito De La Abuela that has been passed down in one family for generations—in fact, the entire restaurant is decorated with family photos from decades past. It felt like I was eating in someone's home, and the food was as flavorful and comfy as if it were made by my own grandmother. Also, it appeared as if most of the other patrons were locals, a sure sign that the food was not only tasty but authentic. Order the Garbanzas con tropezones, a creamy chickpea soup served with Iberian pork and chorizo. It's a classic Canarian dish, and I could have eaten the entire pot!

Like all the Canary Islands, Tenerife was formed after millions of years of volcanic activity. And the islands most famous celebrity is Mount Teide, the majestic volcano that can be seen from pretty much anywhere on the island on a clear day. The aboriginal Guanches, or ancient inhabitants of Tenerife, considered Mount Teide to be a mythological mountain, like Mount Olympus was to the ancient Greeks, and today it still pulls focus as you navigate the island.

The highlights of any visit to Tenerife will surely include a visit to Teide National Park, a UNESCO World Heritage Site that sits at an elevation of about 12,200 feet. Warning: It takes about an hour on a thin winding road to reach the top. Watch out for the downhill bikers who expertly navigate the narrow roads and oncoming traffic. More than once I had to hold my breath as they sped past my van. (I, luckily, was not driving.)

Leave your wheels behind and go for a stroll on one of the many scenic hikes in the caldera of Mount Teide. The terrain is covered with crimson and black lava rock, and it's hard not to feel like you're a part of something ancient and sacred. It also kind of felt like a dinosaur was going to pop out at any moment—very Jurassic Park.

Climbing all the way to the peak takes about six hours on foot. But for those not up for the strenuous journey, there is also a cable car that will take visitors pretty close to top. Be sure to check the forecast before you go. Temperatures can be below freezing in the winter and above 100°F in the summer.

I was lucky enough to take a boat trip out on the south coast during my visit. Our mission was to do some whale watching, and it didn't take long before we floated up to a pod of short-finned pilot whales. Tenerife is a hotspot for these mammals, as well as bottlenose dolphins, who can be found here year-round.

More: My Facebook friends are torturing me with their amazing vacations

Back on shore is the city of Costa Adeje, one of the more popular destinations in the south of the island. It's a bit more luxurious than other parts of the south, with a selection of modern five-star hotels to choose from. If you don't sleep here, it's worth passing through to eat at one of the many waterfront restaurants.

I was in search of a more laid-back experience, so I ventured into La Caleta for lunch. The quiet fishing village was the perfect place to sit and rest my tired legs after hiking in Mount Teide National Park. There are little shops to browse, a few local bars, and restaurants boasting some of the freshest fish in the area. There are many great places to choose from, but meals I ate at La Vieja and Picis were both totally unforgettable.

About 20 minutes away from the fishing village is another town called Los Gigantes. There's only one hotel in the area, but there are a ton of apartments, making it a great place to stay if you're a fan of using sites like Airbnb. I found rentals in the area for as low as $50 a night. But the real star of this town is the Los Gigantes sea cliffs. They are a major tourist attraction, and at sunset the view is nothing short of breathtaking.

Visiting Tenerife in the winter promises food, fun, and culture. The weather will be cool, so a light jacket should never be far away. In the summer, the weather is warmer, the beaches fill up, and the island comes alive.

But really, there's not a bad time to visit Tenerife. They don't call it "The Island of Eternal Spring" for nothing.

How a NatGeo photographer took these mind-blowing winter Yellowstone shots

How to save big money on business travel