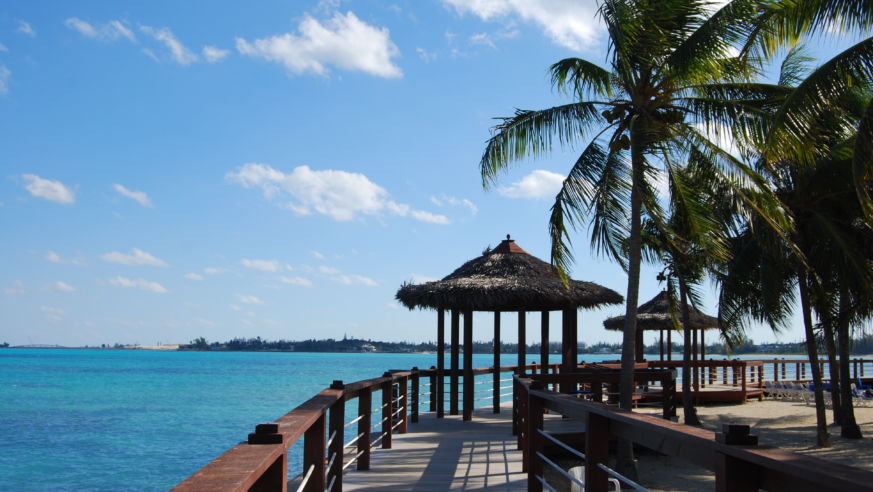 Wyndham Nassau Resort & Casino, in the Bahamas, is one of 10 "Stylish Steals" you'll find in the Caribbean—with a little help from the Budget Travel editors.

Sure, the amazing islands in the Caribbean Sea and off the Southeast coast conjure images of exclusive beaches, posh nightlife, and glitzy shopping. The good news? All of that can be yours without the sticker shock.

Admit it—you've had the Caribbean on your must-see list for years. What's stopping you? For starters, the very word may inspire you to keep one hand on your wallet. But the truth is there's never been a better time to take the plunge—both figuratively and literally—into those turquoise waters. Here, words of wisdom from your favorite experts—the editors of Budget Travel—about enjoying the white sand, world-class restaurants, and rich culture of the Caribbean without breaking the bank. Plus, for each destination, we share a Stylish Steal that will help you book a stay that feels luxe at a smart price.

From northernmost Grand Bahama, with its three national parks, underwater caves, and urbane nightlife, to the bustling port of Nassau, home to gorgeous Cable Beach and historic Bay Street lined with shops and cafes, the Bahamas remain a favorite for savvy travelers (airfares fell 4 percent in 2012 and hotel prices fell 2.5 percent from 2011 to 2012). While in Nassau, you can hop a three-hour ferry to the beach of your dreams on Andros Island, join a deep-sea fishing trip for blue marlin, wahoo, billfish, and tuna, and get a taste of authentic Bahamas cuisine at Twin Brothers with its grilled seafood combo platters including conch, snapper, and grouper starting at $20.50.

Stylish Steal: Wyndham Nassau Resort & Casino, on Cable Beach, is a good home base for exploring Nassau and New Providence Island. Three bars and four restaurants are onsite and the casino offers table games and slots (wyndhamnassauresort.com, from $112).

Sure, the western side of this Dutch island is dominated by high-end hotels, casinos, and chic shopping. But venturing off the ritzy path, Aruba offers staggering natural beauty and outdoor activities. Take a jeep tour of cactus-studded Arikok National Park, go snorkeling, horseback riding, or get a bird's-eye view of it all on a skydive. Near the island's northwestern tip, Malmok Beach is a mecca for snorkelers and divers thanks to the sunken Antilla, a 400-foot German World War II freighter that is now a diverse mini-ecosystem that includes ruby sponges, colorful coral, and tropical fish. Take a detour from the wreck to swim in secluded Boca Catalina Bay.

Punta Cana has been a popular beach destination for Europeans for years, but Americans are now getting in on this inexpensive paradise just a stone's throw (well, a two-hour flight) from Miami. Bavaro Beach is the area's busiest, but its white sand, clear water, and offshore coral reef make it worth a visit. Take day-trips to the country's historic capital, Santa Domingo, with its Spanish colonial architecture, and Indigenous Eyes Park, a private nature reserve and jungle park featuring waterfalls and lagoons for swimming. You can also try a surf lesson at Macao Beach, explore the Cordillera Septentrional Mountains, and soak up some history at Casa Ponce de Leon, a museum dedicated to the explorer.

Stylish Steal: NH Punta Cana is a colorful and stylish resort on Bavaro Beach with plenty of modern perks like complimentary Wi-Fi and satellite TV (nh-hotels.com, from $130).

"Liming" in Jamaica means relaxing. And with miles of beaches, Rastafarian culture, and amazing food, this is the place to lime! Doctor's Cave Beach is the most popular beach in Montego Bay, a short walk from many hotels, and Seven Mile Beach is a few minutes' drive away. Jamaica's beaches offer not only the sun and fun you'd expect but also tasty jerk chicken and the national beer, Red Stripe. Montego Bay Marine Park is an underwater nature reserve with tropical fish and anemones; it's an ideal place to try snorkeling. Up for something more adventurous? Venture to 180-foot Dunn River Falls in the rain forest in nearby Ocho Rios.

One of the delights of visiting Puerto Rico is that you're still in the U.S. yet a world away at the same time. Old San Juan's narrow cobblestone streets and pastel houses—not to mention its salsa-driven nightlife—invite you to join the party. Stop in at Bodega Chic or Nono's for a drink, or join in a public sing-along in Plaza del Mercado, nicknamed "La Placita." For a great view of the Atlantic, head to El Morro, an old fort that's stood here since the 16th century. The most popular beaches in San Juan are in the Condado neighborhood on the eastern side of the city; get there early to grab a prime spot on the golden sand.

Stylish Steal: Numero Uno Guesthouse is a darling 15-room inn right by the beach in the Ocean Park neighborhood of San Juan (numero1guesthouse.com, from $149).

Quick! What's the number one overseas destination for Americans? Venice? Paris? Guess again. It's Cancun, on Mexico's Caribbean coast. Here on this islet, 14 miles of beach and legendary nightlife draw hordes during Spring Break, but the real Cancun, with its Mayan roots, offers something much deeper than a party scene. The beach at Playa Tortugas is festive, with bungalow restaurants and bars under the palms; Playa Delfines, in contrast, is an escapist white-sand beach for aspiring surfers and those who crave some quiet. Don't miss a day-trip to the Riviera Maya with its beachfront ruins at Tulum and the jungle temples of Coba. If you insist on indulging in Cancun's nightlife, head to Coco Bongo, a 1,800-person temple to excess with dancing, nightly trapeze acts, and rock-star impersonators.

Stylish Steal: The Royal Islander is a beachfront resort with humdrum décor but a great location (and a seaside pool) in the Zona Hotelera of Cancun (royalresorts.com, from $120).

St. Croix is a bit of a curiosity in the Virgin Islands. It's bigger than St. Thomas and St. John put together, but draws the fewest visitors because of its remoteness and relatively undeveloped landscape. It also happens to be the easternmost point of the United States. That means that, without a passport, you can immerse yourself in a culture that blends Caribbean, Dutch, French, British, Spanish, and Danish influences all in a package less than 23 miles long and eight miles wide. With all the expected to-dos you associate with an island paradise (swimming, snorkeling, sunbathing, fine dining, and golf), St. Croix also offers the old-world architecture of Christiansted, with homes dating back to the 18th century, and a "rain forest" near the western shore. (It's not technically a rain forest, but private land open to visitors, with a bounty of tropical flora and colorful hummingbirds, warblers, and other birds.)

Stylish Steal: Hotel Caravelle is near Christiansted's historical sites and has a restaurant, bar, outdoor pool, and spa onsite (hotelcaravelle.com, from $136).

Sitting all alone in the Atlantic Ocean 650 miles east of North Carolina, Bermuda is a true outlier. It's not anywhere near the Caribbean Sea, and its food, architecture, and customs are far more British-colonial than tropical paradise. Still, the island (actually an atoll) has found an easy alliance with its neighbors to the south, sharing in tourism efforts and reaping the benefits of their counterbalanced seasons: The Caribbean booms in the winter, while peak season in Bermuda runs from spring through fall. Though Bermuda is always pricey—four of the five most expensive destinations in the Caribbean are here—visitors traveling off-season can find lower airfares, reduced golf fees, and hotels that may be more than 40 percent off summer rates. It's not quite sunbathing weather: December days average 70 degrees.

Stylish Steal: The 200-year-old main house of the Greenbank Guesthouse & Cottages incorporates cedar beams that were used as ballast in transatlantic trading ships (greenbankbermuda.com, from $145).

The Caymans are practically synonymous with two wealthy pursuits: deep-sea diving and offshore banking. Dive 365, an initiative launched by the islands' Tourism Association, inspired by the notion that the Cayman's should provide a unique diving experience for each day of the year, is making at least one of those more accessible to regular folks. One of the most noteworthy dive projects is the decommissioned U.S. naval ship Kittiwake, a 251-foot submarine rescue vessel that now sits in 62 feet of water off Seven Mile Beach. Because the top is only about eight feet below the surface, the vessel is also accessible to snorkelers.

Stylish Steal: Affordable hotels on Grand Cayman are rare, but one good pick is 130-room Sunshine Suites, just a stone's throw from the Ritz-Carlton; each room has a fully equipped kitchen (sunshinesuites.com, from $158).

Tobago is like Trinidad's backyard, a 116-square-mile haven just a 20-minute flight on Caribbean Airlines from its bigger, noisier sibling. Where Trinidad has restaurants, nightclubs, and 96 percent of the country's population, Tobago has empty beaches, calm bays, and spectacular brain-coral reefs. There are also almost three times the number of exotic bird species as there are hotels, and the birds have free rein in the Main Ridge Forest Reserve, one of the oldest protected forests in the western hemisphere.

Stylish Steal: When it comes to human nesting, it doesn't get more peaceful than the four-room Gloucester Place Guest House in Parlatuvier, on the island's north coast. Shaded by coconut palms and mango trees, the guesthouse even has its own natural waterfall and an infinity pool overlooking the Caribbean (gloucesterplace.com, from $100).