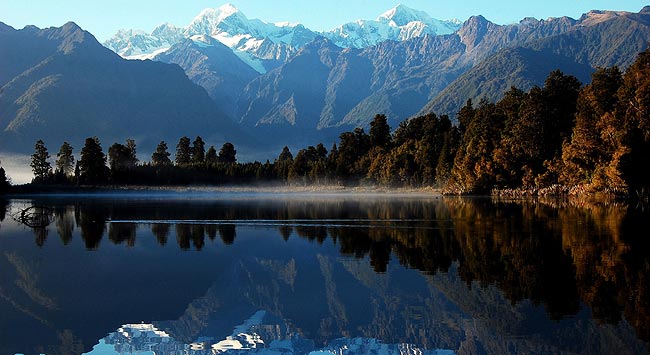 <a href="http://www.flickr.com/photos/petzeninc/3589947297/" target="_blank">Declan Prendiville Photography/Flickr</a>
These 12 lakes go to all the right extremes&mdash;highest, deepest, clearest&mdash;and showcase nature at its most spectacular. Soak up the views from a boat, a cable car, a trailhead, or a castle tower.

UNITED STATES
Crater Lake
Thousands of years ago, the top of a 12,000-foot-high volcano in the Cascade Range exploded. The massive pit left behind became known as Crater Lake, the centerpiece of a national park in southern Oregon that displays nature at its rawest and most powerful. Forests of towering evergreens and 2,000-foot-high cliffs surround the lake, where extraordinarily deep waters—at 1,943 feet, it's the deepest lake in the United States—yield an intense sapphire-blue hue. If winter hiking and cross-country skiing aren't your thing, wait until early July to visit, when the roads have been plowed and the trails cleared. Rim Drive, a 33-mile road that encircles the lake, has picture-perfect views from all sides. For a closer look, follow the mile-long Cleetwood Cove Trail to the shore. Brace yourself before diving in: The water temperature rarely rises above 55 degrees Fahrenheit.
Nearby: The laid-back mountain town of Bend, 112 miles away, makes a nice home base for a Crater Lake day trip.

SEE THE 12 MOST BEAUTIFUL LAKES IN THE WORLD!

CANADA
Peyto Lake
Alberta's Lake Louise is the famous one, on all the postcards and posters. But Louise's sister lake 29 miles north along Icefields Parkway, a two-laner that winds 142 miles through the Canadian Rockies, is even more picturesque. Thanks to glacial rock flour that flows in when the ice and snow melt every summer, the waters of Banff National Park's Peyto Lake are a brilliant turquoise more often associated with warm-weather paradises like Antigua and Bora-Bora. For the most dramatic views of the 1.7-mile-long stunner, encircled with dense forest and craggy mountain peaks, pull into the lot at Bow Summit, the parkway's highest point, and follow the steep hike to the overlook.
Nearby: The town of Banff, the heart of the park, is 62 miles south of Peyto Lake.

MALAWI
Lake Malawi
Home to 1,000 species of fish—estimated to be more than anyplace on earth—Lake Malawi (also called Lake Nyasa) is Africa's third largest lake at 363 miles long and up to about 50 miles wide in spots. Located in a depression 2,300 feet below sea level, it's positioned at the crossroads of Malawi, Mozambique and Tanzania, and supports hundreds of local villages with its rich underwater stock (which is, unfortunately, gradually being depleted due to over-fishing). The lake's southern portion—as well as a bordering nub of wildlife-rich land, Cape Maclear—represents the world's first freshwater national park; it was also named a UNESCO World Heritage Site in 1984. A star of the waters here is the mbuna, a native freshwater fish known for eating directly from people's hands. Bring your snorkel gear—as beautiful as the scenery is, the best part about Lake Malawi is what's swimming beneath you in the crystal clear water.
Nearby: Cape Maclear, located within Lake Malawi National Park, is a perfect base for exploring the area.

PHILIPPINES
Taal Lake
This dangerous beauty, situated just 37.28 miles south of Manila, has two distinct claims to fame: It is the deepest lake in the Philippines, with a depth of 564 feet. It is also home to one of the world's smallest but most active volcanoes, the Taal Volcano, which sits within its waters on the island of Luzon. The lake itself was formed when a larger volcanic crater here collapsed; now seismologists spend a lot of time monitoring this spot for tremors, and sending out frequent eruption warnings through the country's Department of Tourism. Plenty of tour groups offer trips to the natural wonder—in spite of the fact that it has been declared a permanent danger zone. A safer way to see the volcano is by taking a drive along the Tagaytay-Taal ridge in nearby Tagaytay City.
Nearby: Adjacent Tagaytay City offers some well-priced accommodations, in addition to the best views of the lake.

GUATEMALA
Lake Atitlán
Nearly a mile up in the highlands of Guatemala, Atitlán (Lago de Atitlán) rests at the foot of three massive conical volcanoes. Small Mayan villages line its shores, which are set off by steep hills draped with oak and pine trees and nearly 800 plant species. There's no single, must-see view of the lake, so try several vantage points: from up high on Highway 1; from the town of Panajachel, the buzzing market hub that juts out into the water; or aboard a lancha, one of the many small boats that ferry visitors from village to village. We're saddened to note that the lake has built up high levels of blue-green algae over the years (in October and November 2009, a film of green scum began briefly marring its surface; since then there have been ambitious efforts to solve the problem).
Nearby: Panajachel is about 2.5 hours by car from Guatemala City.

SCOTLAND
Loch Lomond
With a backdrop of windswept rolling hills and medieval castles, Loch Lomond feels like it's straight out of a Victorian romance novel. The 24-mile-long lake is dotted with islands, some so small that they disappear when the water levels are high, and others large enough to be (sparsely) inhabited. Most ferries stop at the largest island, Inchmurrin (population 11), so visitors can get a look at the remains of a 7th-century monastery and the 14th century Lennox Castle, used often as a hunting lodge for kings.
Nearby: The lake is 24 miles north of Glasgow and 66 west of Edinburgh.

ITALY
Lake Garda
If the shape of Italy is a couture boot, think of the imprint of Lake Garda as a design from the funky sister line—long and skinny at the top, opening up toward the bottom. Garda is the country's largest lake and one of the most popular vacation spots among Italians. The southern shore is home to hot springs, resort towns with pastel villas and terra-cotta-roofed hotels, and most of Garda's 28 miles of serene, pebbly beaches. To the north are the jagged peaks of the Dolomites, a magnet for hikers and bicyclists who want to test their endurance. In Malcesine, an adorable speck of a town with cobblestoned streets and a medieval castle, you can board a cable car up to Mount Baldo for one of the best aerial views of the lake.
Nearby: Lake Garda is about halfway between Milan (89 miles away) and Venice (109 miles away), but to get the full, relaxing effect, stay in one of the south shore's many small towns.

FRANCE
Lake Annecy
This alpine lake in the heart of the French Alps is a looker, but don't expect to spend your visit gazing over the water in quiet reflection. Lake Annecy is all about activity—particularly in August, when Paris shuts down and the French take extended holidays. Sailors, kayakers, and water-skiers crisscross the water; bikers and hikers hit surrounding nature trails; and refugees from the city fill the outdoor tables at the lakeside restaurants and bars. Repeat visitors know to plan their trip for the first Saturday of August, when a staggering, nearly two-hour-long fireworks display illuminates the water.
Nearby: The closest major city is Geneva, 30 miles north, in Switzerland, but most people stay right on the lake.

CROATIA
Plitvice Lakes
These 16 blue-green lakes, hidden by thick vegetation and connected by hundreds of waterfalls, could be the set for the next Jurassic Park. For adventure as well as killer views, start at one of the lower lakes and work your way up following the sturdy wooden planks that turn what could be a treacherous trek into a fun hike. Take a detour along the 10-minute loop that leads to the region's tallest fall, 230-foot-high Veliki Slap ("Big Waterfall"), a breadth of streaming white water that collects in turquoise pools. While hiking, keep your eyes peeled for deer, wildcats, boars, wolves, and bears—a more likely sighting than a T. rex.
Nearby: There are four hotels in Plitvice Lakes National Park, but most people drive in for the day from Zagreb, about 2 hours by car.

KENYA
Lake Nakuru
The water is blue enough, and the backdrop—grasslands and rocky hillsides—has the makings of a nice photo, but neither is what sets this lake in central Kenya apart. The real draw here is the mass of pink on Nakuru's edges. Flamingos are one of the few species that can withstand the lake's hostile conditions—the water has so much sodium carbonate that it burns nearly everything that touches it —and they flock to the lake en masse. There can be as many as a million birds feeding on algae in the shallows at one time, wading side by side.
Nearby: The lake is in the heart of Lake Nakuru National Park, a sanctuary for black-and-white rhinos, three hours by car from Nairobi.

NEW ZEALAND
Lake Matheson
Alternately known as Mirror Lake, this South Island lake is famous for its reflections of Mount Cook and Mount Tasman. Visiting just after dawn is ideal, when the water is at its calmest and mirror images are impossibly perfect. The lake itself is well worth exploring, too. Park near the Clearwater River suspension bridge and follow the 1-mile loop past kahikatea and rimu trees, which have extra-tall trunks and fanciful bushy tops and look like something from a Dr. Seuss book.
Nearby: Fox Glacier township, a village that serves as a base camp for trekkers, is three miles east of the lake.

SLOVENIA
Lake Bled
Why not get to the good stuff right away? To take in this Slovenian lake's most breathtaking vista, head immediately to Bled Castle, at the edge of a sheer, 460-foot-high cliff. You'll see mountains in every direction—the Julian Alps and the Karavanke range—and below, the Alpine lake and its main attraction, Bled Island, a tiny forested circle that's home to the 17th-century Church of the Assumption and its prominent baroque clock tower. Down on the lake's shore, board a pletna boat (similar to a gondola) to the island. Be sure to ring the church bell and make a wish before returning to the mainland. Mountains shield the water from icy northern winds, so Lake Bled is warm, relatively speaking (79 degrees Fahrenheit). If that's still too chilly, head to the lake's northern section, where three hotels have built pools around natural thermal springs.
Nearby: The Slovenian capital of Ljubljana is an easy 35 miles away.