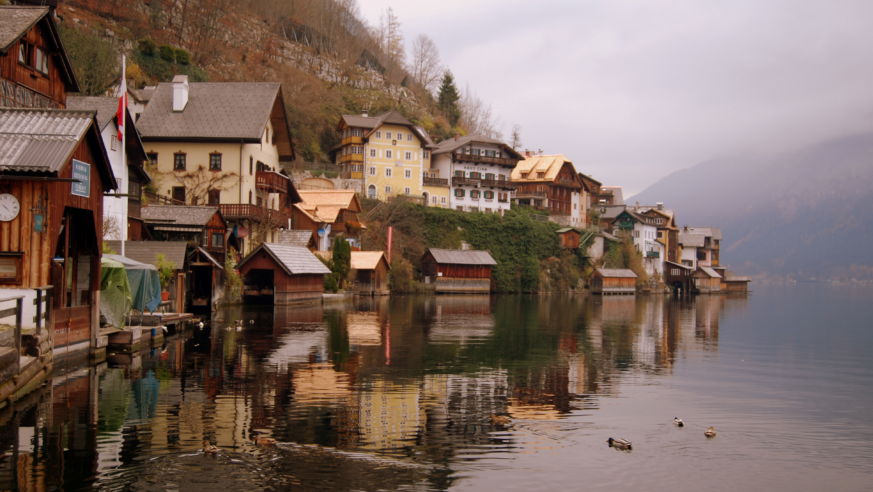 A beautiful morning in Hallstatt, Austria.

This article was written by Zeneba Bowers and Matt Walker and originally appeared on their blog, littleroadseurope.com.

Europe is full of small towns that look like they're lifted right from a postcard rack: Sweeping vistas; cobblestone streets; thatched-roof cottages or terracotta-roofed villas; idyllic parks; quaint storefronts selling meats, cheeses, flowers, and crafts; restaurants and pubs full of local flavor, in their cuisine and in their people. Some of these, like the villages that surround Italy's Lake Como or dot the landscape in England's Cotswolds, are dauntingly pricey and crushed with tourists during high season. However, there are many places, if you know where and when to look, that offer dining, shopping, and admissions to sights for very reasonable costs; lodging, too, is significantly less than you'd expect, especially in the off-season. Here are 16 picture-perfect European towns that we've discovered over the years.

Hallstatt is a tiny town—it has fewer than 1,000 residents—sitting on the edge of a small lake surrounded on all sides by precipitous peaks. Above the town is a network of salt mines that have been in operation for centuries—there's also a bar up there. Be sure not to miss the church with the Beinhaus ("bone house"), where, due to lack of space in the tiny cemetery, generations of deceased locals have had their skulls preserved on display, painted with their names and dates of death.

The small Tuscan town of Pienza is famous for its cheese—pecorino di Pienza, a sheep's milk cheese whose scent permeates the town. The town has a beautiful 'balcony,' a large pedestrian walkway on the town wall overlooking the valley below and Monte Amiata in the distance. Pienza has a lot of great restaurants, including Trattoria la Fiorella and Osteria Baccus. It's also home to talented artisans with shops including leather artist Valerio Trufelli and ceramic artist Linda Bai. Pienza evokes romance with its wine bars, beautiful sunset views, and cobblestone streets with names like Street of the Kiss and Street of Love.

Tiny Bibury dates back to the 10th century, and features one of the most photographed streets in England, Arlington Row, a row of quaint stone cottages that date back to the 1300s. Today the village has a pub and a restaurant (both offer rooms), as well as a woolen mill. Stroll through the hamlet and admire the ivy-covered stone cottages, the lush English gardens, and the small pond in the park filled with white swans. If you like fresh fish, your lunch will never be fresher than when they pull your meal straight from the trout farm down the street.

This very cute little fishing town, Ireland's most southerly village, is located on a thin peninsula in west County Cork. Surrounded by the sea and rolling green hills, Crookhaven boasts gorgeous views. There is an excellent gastro-pub here called the Crookhaven Inn and next door you'll find Jorg's Goldsmith Studio, where goldsmith Jorg Uschkamp creates unique jewelry with precious metals and jewels. Just outside the town is the Protestant Church of Saint Brendan the Navigator, built in 1717.

Orta San Giulio is perched on a hill that juts out into Lago Orta. It offers great views of Isola San Giulio, the only island in the lake, which houses an excellent restaurant and a convent. The convent is ringed by a shady, circular stone walkway, called "The Way of Silence." Orta San Giulio has many great restaurants, a specialty chocolatier, and beautiful views of the lake.

On the Amalfi Peninsula, next door to the much larger, pricier, and more crowded Positano, Praiano is a quiet, picturesque cliffside town with many little nooks and crannies to explore. There is a walkway that leads to the water's edge, where several restaurants cling to a rocky grotto and serve fresh fish unloaded by the fishermen in the cove just minutes before. The coastal road bisecting the town bustles with shops, bars, a fruit vendor, and a butcher. Driving through the town, one can also see a miniature model layout of Praiano tucked under a little overhanging rock on the side of the road.

If you're looking for the perfect medieval walled town, this is it. Visitors can walk atop the entire circumference (more than two miles) of the city walls, stopping to admire the buildings, gardens, and countryside below. Aside from enjoying many German lagers without worrying about driving, activities in Rothenburg include the Night Watchman's tour, offering an entertaining and educational slice of life; the Museum of Medieval Torture; and the Christmas market stores, where you can find beautiful German decorations as well as a museum outlining the history of Christmas traditions. If you're there on a Wednesday night, head over to Mario's which hosts the English Conversation Club, hosted by a man who calls himself Herman the German. The town is very crowded May thru September and in December, but in other months you'll have it all to yourself.

The modern sprawl of lower ("basso") Certaldo belies the treasure that sits at the top of the hill. Take the long footpath, or ride the cable car ("funivia") up to Certaldo Alto, and you'll have stepped into a timeless, Renaissance storybook village. Explore the charming streets; see the artwork on display at the Church of Saints Tomaso and Prospero and at the Museum of Sacred Art; visit the Civic Museum at the Praetorian Palace, which includes a torture chamber and prison; and have a "cappuccino decorato" (decorated coffee) at the Caffetteria Artistica.

Tiny Montefioralle in Tuscany is known as the birthplace of Amerigo Vespucci, the Italian explorer whose name inspired the name "America". The door of his birth home displays two symbols of his family: their family insignia of the wasp, and the letter V. The hill town is quite small, with one circular cobblestone street that can be walked in about 10 minutes. Like many medieval villages, the stone houses here are all seamlessly connected. Montefioralle's homes have very beautiful and ornate doors, making for a charming stroll.

A coastal town in County Clare on the Wild Atlantic Way, Doolin has a few pubs and is well known as a place to hear traditional Irish music, which can be heard nightly or weekly depending on the season. Doolin is also quite close to the famous Cliffs of Moher, and just outside Doolin is the evocative Doonagore Castle. Both Doolin and the Cliffs of Moher are popular tourist destinations, but if you visit in the off-season you can enjoy the music and the sights without the crowds. To experience the Cliffs of Moher completely alone, visit them at daybreak and enjoy your own private, stunning sunrise.

A visit to this ancient and tiny castle town feels like a step back into the past. The castle fortifications and town buildings, some dating back as far as the 10th century, are largely intact. A walk within the castle walls takes just a few minutes, and you'll discover several shops, a bar, a hotel with a restaurant, and a tiny old church that is a popular location for weddings in the area. As of this writing the town has just five residents, and after you've seen the place you'll want to add yourself to that population. Just outside the castle, overlooking the castle courtyard, is a very modest but excellent restaurant, La Scuola Vecchia. The best part: You can stay overnight in a B&B in this fairytale castle town, in a four-poster bed, for less than a budget hotel in Rome.

This hilltop castle town of Monteriggioni is visible for miles around. Visitors can walk the platforms around the high 12th-century walls and look out over the broad countryside. The wide town square has several restaurants and artisans' shops, as well as the small but beautiful Church of Santa Maria. The Medieval Armor Museum has replicas of armor and weapons from the ages—you can even hold and try on some of them to get a feel for what it was like to defend the ramparts 700 years ago. The town has a full-on medieval festival in mid-July, with costumed musicians and artisans plying their trade just like they did in the 1300s, offering all manner of crafts, foodstuffs, and entertainment.

Glastonbury is a Mecca for many New-Age and pagan pilgrims, who regard various aspects of the town's tangled history and mythology as sacred. The village is identified most with its links to the Arthurian Grail legend, as well as to tales of Joseph of Arimathea. It is marked by a large hill of mysterious origin, called the Glastonbury Tor. As is the case with many such pagan sites, early Christians built upon and co-opted these sacred places and attached their own legends to them, such as Glastonbury's "Chalice Well," a more than 2,000-year-old natural spring purported to be a holy well with healing properties. The preponderance of all this history and legend gives Glastonbury a different feel from most other smallish English towns. Its commercial center, in addition to the usual pubs and gift shops, is full of book shops and art galleries highlighting the town's mystical background. In the middle of town stands the evocative ruins of the ancient Glastonbury Abbey, the supposed burial place of King Arthur and his Guinevere.

Set amidst the steep forest hillsides of Tuscany's Garfagnana region, Barga is a fortified, walled city. Piled up on a hill, it is overlooked by its Romanesque Duomo, a cathedral dedicated to St. Christopher—if you get there at noon you'll hear its ancient bells ring out and echo across the mist-covered valleys below. No cars are allowed within the old city walls; good shoes and good endurance are a must here, as the narrow cobbled streets are extremely steep. Barga hosts several festivals in the summer including a famous jazz festival.

The cute little port town of Lyme Regis is at the center of the "Jurassic Coast" of England, a stretch of coastline known for its rocky exposure of several geological eras spanning some 180 million years, and is therefore of great interest to purveyors of a lot of dinosaur stuff at the gift shops. Lyme Regis is one of those salty towns that is crowded during summer vacation times, but also a lot of fun in the off-season. You'll find many pubs with great local ales and ciders; shops that sell the same; and lots of places to buy artworks, goods, and foodstuffs from various artists and artisans. It is also the home of the Dinosaurland Fossil Museum, great for little kids and grown-up kids.

The beer brewed by the monks of the Andechs Monastery is regarded as the best beer in Germany, and after trying it, we have no cause to question this claim. This thousand-year-old Benedictine monastery is still an active holy place and a pilgrimage destination. Positioned atop a small hill in the midst of the idyllic Bavarian countryside, the monastery includes a Baroque church and a bell tower topped with a distinctive "onion" dome. The monastery grounds comprise a village in itself, with a restaurant, several shops, and (naturally) a huge beer garden where visitors can enjoy the local foods and of course try the many varieties of masterful brews.