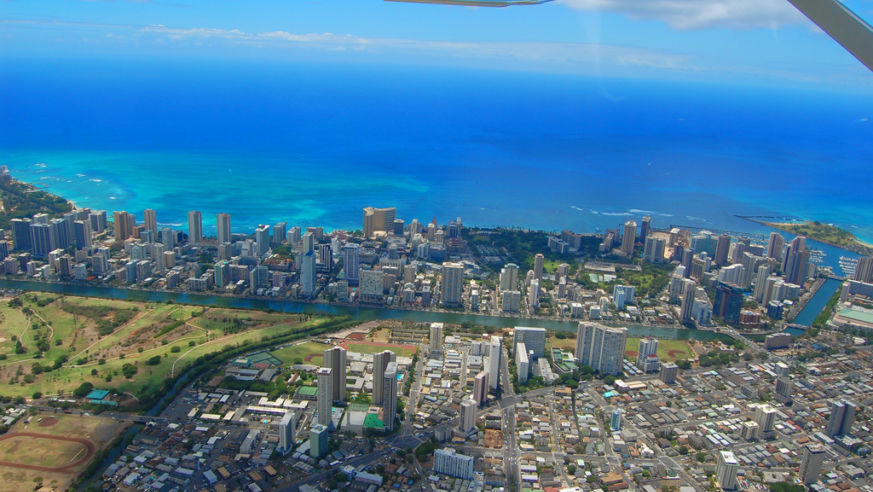 In a word, the island of Oahu is gorgeous. Yes, there are freeways, high-rises, and sprawls of development which climb like ivy up the terraces of the Ko’olaus, but there is also the ever-present fusion of nature where sky, sea, shoreline, and summit all form a tableau of tropical perfection. While you can experience this beauty in many forms on all different corners of the island (a sunrise from the shoreline of Kailua comes to mind), one of the best places to bear witness to the island’s beauty is with a bird’s eye view from above.

More so than on any other Hawaiian island, Oahu has opportunities to soar high above the peaks for an aerial view of the island. So whether it’s whirring above the battleships of Pearl Harbor, silently gliding over the beaches of the North Shore, or plummeting through the air at cheek-flapping speeds, here are some of the best ways to experience Oahu from above.

Parasailing
When it comes to parasailing, many people erroneously equate the activity with being scary, terrifying, and extreme. On the contrary, instead of looking at the height of the parachute and immediately thinking “scary”, you should instead be looking at your private perch and instead be thinking “silent.” Think about it—when was the last time you were 500 feet away from even the slightest sound? As your toes are tickled by the moving breeze and the royal blue waters of Maunalua Bay stand in contrast to the green of the mountains, parasailing on Oahu becomes one of the most serene ways to get an aerial view of the shoreline.

Skydiving
If you’d rather crank the adventure dial all the way to the realm of the extreme, Oahu is the most popular place in Hawaii to throw yourself out of an airplane. Much of the skydiving takes place on the North Shore above reefs which thunder with surf, and you can also get views of Mt. Ka’ala as it rises gently from seashore to summit. From the brisk altitude of 14,000 feet where you’ll exit the door, you can occasionally see Honolulu, where the pace of the city moves as quickly as the thump of your adrenaline-fueled heart.

Gliding
If flapping cheeks and ultimate free fall seem just a bit too intense, a more mellow way to experience the beauty of the North Shore is with a calming glider ride above Dillingham airfield. From an elevation of about 3,000 feet, slowly glide back down to the airfield without the use of a motor or propellers. These rides can be as “mild or wild” as you want them to be, and while many people opt to simply take in the sights from high above the North Shore, there are also the options to do acrobatic loops or even pilot the glider yourself. Soaring above the shoreline of Waimea Bay and gazing towards the wilds of Ka’ena, this is a panoramic journey of Oahu’s beauty that is as silently stimulating as it is scenic and serene.

Seaplane
Unlike Alaska, Canada, or even the Caribbean, one type of plane you rarely see in Hawaii is an old-fashioned seaplane. With these “flying boats”, you have the chance to explore the perimeter of the island after a take-off from Ke’ehi Lagoon. On a one-hour Oahu seaplane tour, you can circle the island from the crater of Diamond Head to the island of Chinaman’s Hat. Soar above the peaks of the jagged Ko’olau mountains, and gaze down on fields which are pregnant with pineapples as they tan in the sunshine below. On your return to the waters of Ke’ehi Lagoon (which is conveniently located next to the airport), you can also fly over the waters Pearl Harbor where it’s still possible to see the outlines of ships as they rest in their watery graves.

Helicopter
Of course, when it comes to viewing the island from the air, few things will ever be able to rival the sights on a helicopter tour on Oahu. These whirring choppers can hover in valleys where fixed-wing aircraft can’t venture, and it’s the hands-down best way to get views of waterfalls which are otherwise completely inaccessible. From the comfortable confines of the helicopter cockpits with their expansive, wrap-around windshields, this is truly an experience where you can spend an hour not knowing which way to look. After all, when you have morning clouds tickling the peaks of the mountains off the left side of the chopper, and ribbons of surf which are breaking on the reefs so clearly it seems you could touch them, a helicopter tour is a visual feast of color, topography, and adventure.

One final tip
Granted, there are a number of factors that determine if your session above Oahu is going to be a success. One, of course, is weather, and it’s vitally important to schedule your adventure for the early morning hours. This is when the skies are clearest and offer the best chance for views, and it’s also the time when the winds are light and you can expect the least amount of turbulence. Also, while winters in Hawaii are far warmer than the rest of the mainland U.S., there can still be precipitous winter storms which can roll through during the winter. The thick clouds which linger over the island can greatly reduce the visibility, although the plus side is that the mountains can turn into dripping walls of water. In order to ensure the best conditions for your aerial foray above Oahu, be sure to keep an eye on the near-term weather forecast for and idea of the upcoming conditions. This way, in the event you have to reschedule, you can still do so within the terms of the contract of the tour or activity you book. On most days, however, the skies above Oahu are brilliantly blue and open for aerial adventure, and the myriad jewels of the island of Oahu like a canvas beneath your feet.