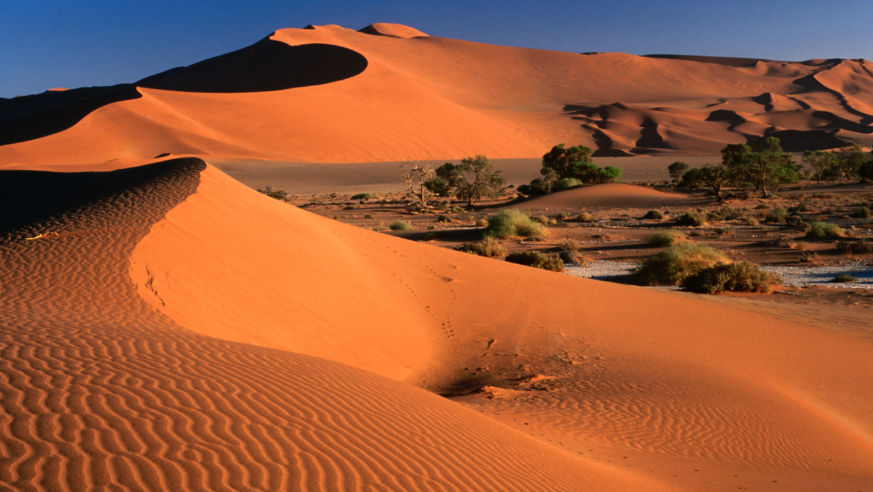 This article was written by the Jill Nawrocki on behalf of Viator.com.

With only about two million people scattered across the expanses of its breathtaking savannahs, haunting deserts, and fertile deltas, Namibia is one of the least-densely populated countries in the world. Yet somehow this southern African nation that’s approximately the size of California still offers some of the greatest ecological and cultural diversity in the world.

With a modern capital city, comforting colonial-inspired coastline, and network of well-paved roads, accessing all that this beautiful country has to offer is incredibly easy—even for first timers. As a result, this coastal gem has quickly taken its place among the top spots to visit in Africa and become the perfect entry point into exploring this incredible continent. Here are some of our favorite reasons to visit Namibia.

The Language Barrier is Small

While about half of Namibia’s two million people speak Oshiwambo—one of the country’s 11 major languages—at home, English is actually the national language. When the country gained its independence back in 1990, the government hoped shifting to a more-widely spoken tongue would result in faster economic advancement. Whether this has been the case is still up for debate, but travelers to Namibia will find that even in some of its most remote regions at least a little English is often spoken. In larger cities like Windhoek and Swakopmund where German and Dutch influence was once great, visitors can easily get around speaking one of these languages instead. And while the presence of European languages makes navigating the villages a bit more manageable, the country has done well to preserve its own indigenous tongues. Travelers can still hear the clicking language across Damaraland and the far south, made famous by the Nama, Damara, and San people.

The History is Fascinating

Like South Africa, Namibia’s history is rich with stories of oppression and tales of triumph. From its early colonial days, when the Dutch and Germans ruled this nation formerly known as German South-West Africa and later, as only South-West Africa, its people have been tucked under a harsh and difficult rule. Whole tribes of people were collected and confined to specific regions of the country under German rule and historians have speculated that the model used by the Nazis in the Holocaust was tried and perfected on the people of Namibia during the Herero and Namaqua genocide. Later, when Namibia became a part of South Africa, the country fell under apartheid rule. As a result, white Namibians and German and Dutch residents were placed in wealthier “townships” and black Namibians were forced to live in areas known as “locations.”

Although this system of oppression no longer exists today, travelers to Namibia can still seem remnants of the nation’s difficult past. Monuments to German soldiers and bloody battles exist in many of the country’s larger cities, particularly in Namibia’s southern regions, and German and Dutch colonial architecture is the norm in places like Windhoek, Luderitz, and Swakopmund.

The Landscape is Beautiful

Namibia is home to some of the world’s most diverse landscapes. From the sweltering sands of the Namib and Kalahari Deserts to the unforgiving Skeleton Coast, fertile Okavango Delta and the rocky depths of Fish River Canyon, this is a country that has it all. The best part: its network of well-paved roads with practically zero traffic makes moving one extreme to another a breeze. Explore the vast savannahs of the south in Karas or Hardap. Or travel to the north, where lush green mango trees and tall grasses line the Okavango River. To the east, in Omaheke, travelers can cruise through the desert under the light of the blazing sun or head to Kunene where mountain passes lead to the land of the Himba people in the unique town of Opuwo.

Adventure Comes in Many Forms

All this diversity in landscape means there’s plenty for the outdoor adventurer seeking a new kind of thrill in Namibia. Avid hikers can pack up a bag and descend into the depths of Fish River Canyon, one of the nation’s most difficult multi-day hikes that dips across rivers and rocky passes with no escape from the blinding Namibian sun. Extreme sports enthusiasts can skydive from tiny private planes over the desert sands outside of Swakopmund or ride the sandy waves while boarding down the world-famous dunes near the coast of the Atlantic.

Travelers can take an evening game drive through the vast Etosha in hopes of spotting a lion pride in search of a kill, or head to one of the country’s well-kept lodges for the once-in-a-lifetime experience of hunting springbok in the bush. And while hiring a car, hopping a tour or traveling with a guide are easy ways to see this great nation, one of the most adventurous ways to get around is thumbing a ride from the side of the road, where friendly locals are often eager to offer a lift to visitors exploring the countryside.

The Animal Life Is Diverse

Namibia’s wildlife is as rich and diverse and its geography and its people. That’s because when the nation gained its independence back in 1990, it made conservation one of its top priorities. Etosha National Park, located in the northwestern part of the country, is one of Namibia’s most popular wildlife destinations. Its 22,000 square kilometers of protected land are home to hundreds of elephants, rhinos, giraffe, lions, kudu, and zebra that gather during rainy season at the park’s famous watering holes. Visitors can stay at one of the park’s incredible lodges, where western comforts meet life in the bush, or spend an afternoon driving through the grasslands of this reserve.

But Etosha isn’t the only place where the health and safety of Namibia’s wild animals reigns supreme. At the Cheetah Conservation Fund located just outside Otjiwarango, a team of expert staff led by American Laurie Marker, keep close watch over some of the country’s most beautiful felines. The center, which is a hub for research, education, conservation and habitat restoration, is also home to a number of cheetahs.

Namibia is also home to one of the largest seal colonies in the world. Located in Cape Cross, along the country’s Atlantic coast, the Cape Fur Seals have become one of the nation’s most popular—and unexpected—wildlife attractions. Travelers can tour by boat or kayak up close to these playful sea creatures while on a visit to Swakopmund.

The People Are Welcoming

Despite its history of apartheid and oppression, Namibia is full of diverse people who are warm and welcoming to foreign travelers. Whether it’s hitching a ride with a local from the side of the road, hunting alongside an expert game guide, or visiting a traditional Himba village in the northern region of Kunene, travelers will find Namibia to be a country with a big heart, a warm embrace, and a whole lot of hospitality.