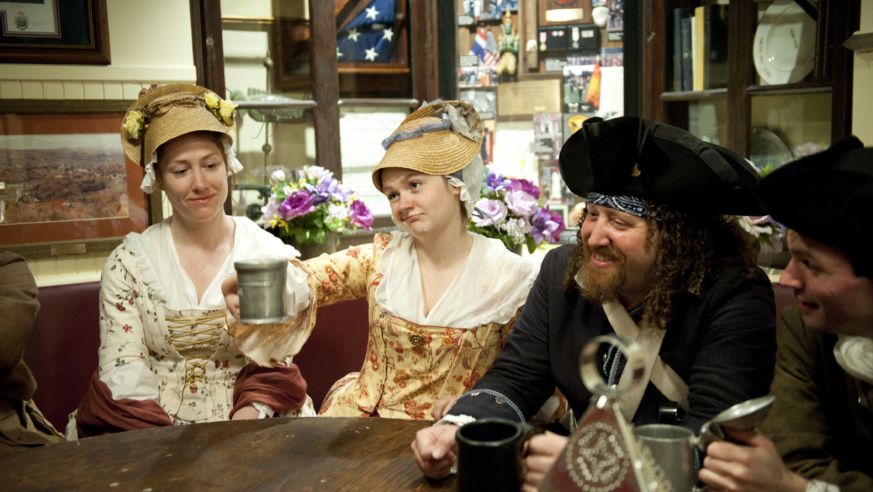 Don't miss the Freedom Trail Historic Pub Crawl next time you're in Boston.

The following article was originally written by Jeremy Crider on behalf of trivago.

Whether you're looking for a way to celebrate National Poetry Month (marked every April in the U.S.) or simply searching for a fun alternative to the typical sight-seeing tour during your next vacation, hotel search site www.trivago.com has your 2014 pub crawl calendar covered. From more than 20,000 zombies sloshing in the streets of Minneapolis to a peddling party through the streets of Portland, to a day of drinking and reciting poetry during a walking tour of Manhattan, these seven unique pub crawls in cities across the U.S. are sure to quench your hankering for hops.

Zombie Pub Crawl—Minneapolis, Minnesota
Who: Zombies. Well, people dressed as zombies—thousands of them, in fact.
What:Zombie Pub Crawl
Where: Downtown Minneapolis, Minnesota
When: Saturday, October 11, 2014
Why?: Why do you need a reason to dress like the undead and literally crawl around Downtown Minneapolis once a year? What began with just 150 zombie enthusiasts in 2005 has ballooned into one of the world's largest annual gathering of zombie lovers. TheZombie Pub Crawl—once crowned the "World's Largest Gathering of Zombies" by the folks at Guinness World Records—is expecting some 25,000 people in 2014. If you're hoping to make an all-day event of the occasion, you can also participate in the ZPC's 6.66K run and watch in horror as some of the world's best eaters tackle the World Brain-Eating Championships. In 2013, Joey Chestnut, the world's #1 ranked competitive eater, demolished the competition by eating 54 "brain tacos" created by Andrew Zimmerman, host of the Travel Channel series, "Bizarre Foods." Need a hotel in Minneapolis? Click here for options.

Freedom Trail Historic Pub Crawl—Boston, Massachusetts
Who: History buffs or tourists looking for an excuse to drink while learning.
What:Freedom Trail Historic Pub Crawl
Where: BOSTIX Booth at Faneuil Hall in Boston, Massachusetts
When: Every Tuesday at 5:30 p.m.
Why?: Boston is steeped in hundreds of years of history, and there may be no better way to walk the same streets as native Ben Franklin (and Ben Affleck for that matter) than while buzzing on Sam Adams. The weekly pub crawl, which is led by an 18th century costumed guide, takes guests on a stroll through the past while visiting four of the city's most famous drinking holes—Union Oyster House, the Point, the Green Dragon, and Bell in Hand. The 90-minute crawl includes light snacks and costs $43 per person. Don't forget to make a reservation—this history-packed pub crawl fills up fast! Need a hotel in Boston? Click here for options.

Music City Pub Crawl—Nashville, Tennessee
Who: Music lovers, cowboys, cowgirls and brides-to-be.
What:Music City Pub Crawl
Where: Downtown Nashville
When: Tours available daily. Reservations required.
Why?: Nashville is home to the music industry and Tennessee is home to Jack Daniel's Whiskey, so a pub crawl through the heart of Music Row is almost a rite of passage when in town. Popular with tourists and local brides-to-be, the Music City Pub Crawl has become a sought after alcohol-filled attraction. The two-and-a-half-hour guided walking tour stops at three watering holes in downtown Nashville. Each stop on the tour takes a lighthearted look at Music City's past and drink specials are available to wet the whistle at every stop. Groups of 6-15 people can reserve a guide for the night as they take in the sights and sounds of Nashville with a stiff drink in hand. Need a hotel in Nashville? Click here for options.

Pirate Pub Crawl—Anchorage, Alaska
Who: Lads, Lasses and all sorts of Scallywags who want to support a great cause.
What:Pirate Pub Crawl
Where: Downtown Anchorage
When: September 2014 (Date, TBA)
Why?: Aye, this here annual party isn't just an opportunity for the people of Anchorage to celebrate their inner pirate; it's also a fundraiser to support the Blood Bank of Alaska. Since 2010, hundreds of mateys have shined up their swords and put on their best sailing garb for a night of drinking and treasure hunting at pubs in the heart of Downtown Anchorage. From 7:00 p.m. into the wee hours of the night, the "land lubbing" pirates crawl from one drinking destination to the next collecting stamps on their official Pirate Pub Treasure Crawl Map. At the end of the night, the philanthropic pirates with the most stamps are entered to win some serious loot—80,000 airline miles! Who needs the Jolly Roger when you can fly first class? Need a hotel in Anchorage? Click here for options.

The Greenwich Village Literary Pub Crawl—New York City
Who: Book lovers looking for an atypical tour of one of Manhattan's most famous neighborhoods.
What:The Greenwich Village Literary Pub Crawl
Where: Begins at White Horse Tavern
When: Saturdays at 2:00 p.m.
Why?: If you're looking for an alternative to the double-decker bus tours NYC is famous for, The Greenwich Village Literary Pub Crawl may just be your cup of tea. Famous for its contributions to America's bohemian culture, Greenwich Village has been home to some of the world's literary greats. During the two-and-a-half-hour walking tour of the neighborhood, crawlers will visit bars that were beloved hangouts for many writers and stroll through the historic district of The Village, all while reciting  some of the poems and prose that were written there. Speaking of poetry, lovers of verse can celebrate National Poetry Month by joining a tour dedicated to the many poets who have helped make the Village the most literary neighborhood in the nation. According to owner and tour guide, Eric Chase, attendees will toast to "poets who literally, or should we say "literarily" changed the world in a tiny corner of Manhattan." Need a hotel in New York City? Click here for options.

BrewCycle Portland—Portland, Oregon
Who: People looking to burn off calories while simultaneously consuming them.
What:BrewCycle Portland
Where: All rides start at 1425 NW Flanders St. in Downtown Portland
When: Tours offered daily. Reservations required.
Why?: What's not to love about BrewCycle Portland? You can avoid getting a beer gut and take a tour of Portland, all while enjoying some of the city's best craft beer. This two-hour tour includes stops at three of Portland's most popular local breweries aboard a giant, people-powered bicycle-bar. According to owner, Andrea Lins, "One thing people are usually surprised about when it comes to our brewpub crawl is that it's actual work! While that varies depending on who you are pedaling with, the northwest hills are slight, but challenging. People should come ready to pedal!" If you're up for an athletic endeavor, guided tour and night out on the town, BrewCycle Portland is a great option for seeing this popular Pacific Northwest city. Need a hotel in Porland? Click here for options.

The Christmas Crawl: The Official Tacky Christmas Sweater Bar Crawl—Washington D.C.
Who: Owners of tacky holiday clothing searching for fun and acceptance.
What:The Christmas Crawl: The Official Tacky Christmas Sweater Bar Crawl
Where: DuPont Circle—Northwest Washington D.C.
When: December 6, 2014
Why?: Celebrate the holiday season by sporting a tacky sweater and drinking with thousands of strangers in our nation's capital. Since 2011, The Christmas Crawl has taken over DuPont Circle, a neighborhood in Northwest Washington D.C. In 2013, 11 participating bars offered up more than 40 drink and food specials for thousands of partygoers wearing their finest (and funniest) tacky Christmas outfits. According to organizers, even more party perks are being offered this year and crowds are expected to be even larger. Finally, the perfect opportunity to put your grandmother's handmade Christmas gift to good use! Need a hotel in Washington D.C.? Click here for options.

Hotel search site trivago compares the prices of over 700,000 hotels on more than 150 booking sites (including Expedia, Priceline.com, Travelocity, and Hotels.com), saving millions of users an average of 35% per booking—and lots of time. From beaches to business, Trivago has your next trip covered.