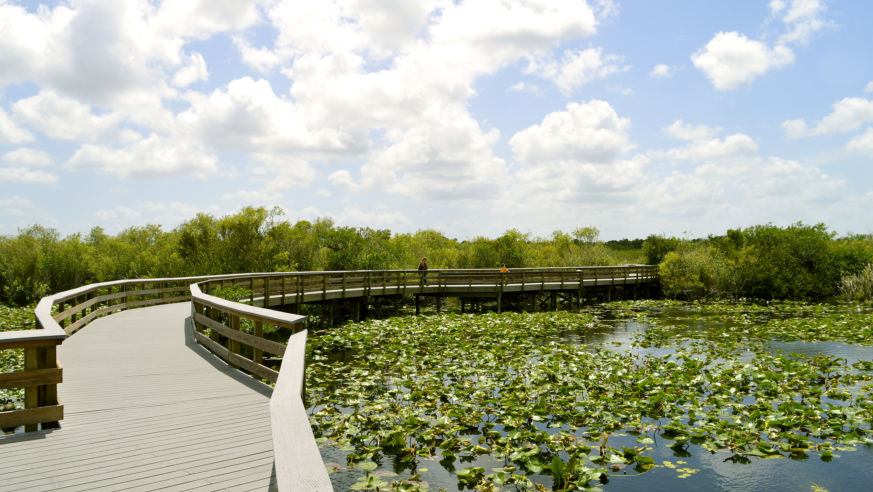 Where do we start? From the inspiring Space Coast to the jaw-dropping Keys, from legendary beaches to incredible Gulf Coast seafood, the Sunshine State is a dream trip you can actually afford.

Florida is a big, beautiful place with something for every style of traveler. Here, we've narrowed the list a bit, with options that will please everyone in your family.

Just about an hour’s drive from Orlando, the Cape Canaveral area is one of Florida’s jewels. Cruising the “Space Coast” between Titusville and Melbourne is a thrilling way to delve into America’s past (this was, after all, the center of the national space program in the 1960s) and enjoy some of the state’s finest natural wonders, too. The Kennedy Space Center is the must-see here for its great displays devoted to the space program. But you may find yourself just as drawn to beaches and wildlife refuges, and that’s just fine. Merritt Island National Wildlife Refuge is home to egrets, herons, manatees, and even feral hogs. Canaveral National Seashore is a cool place to see loggerhead turtles in their natural habitat. Cocoa Beach is a surfer's paradise—where else can you shop 24/7 at Ron Jon's Surf Shop? You can also pick up the perfect Cuban sandwich in Cocoa. In Melbourne, you can sign up for open-water scuba lessons if you’re feeling adventurous, or just relax at a local eatery with a plate of fried chicken atop buttermilk pancakes.

Sure, we all know that Miami is a mecca for foodies. But Orlando has its own food scene that even some of its biggest fans are surprised to learn about. Devotees of the “big three” theme parks (Universal, Disney, and SeaWorld) may know that the fish & chips at the Wizarding World of Harry Potter are magical, and that Walt Disney World and Epcot offer fine dining choices, but when it comes to culinary arts, Orlando is not such a small world after all. The Rusty Spoon has garnered much praise for its creative use of fresh local ingredients sourced from Florida farmers, including butter-poached wild clams and slow-braised Jamison farm lamb collar. International Drive has an array of choices like Ethiopian, Indian, and Japanese fare, and a new Shake Shack (the chain that started as a NYC hot dog cart) has arrived, too. And we enjoy partaking of food trucks like Arepas El Cacao.

You’ve no doubt heard that Everglades National Park is a famous Florida park, with miles of fascinating and beautiful waterways and wildlife like alligators. But Florida is also home to lesser known parks and preserves such as Honeymoon Island, a state park with four miles of white beaches and two miles of nature trails where you may spot osprey, bald eagles, and terns. Once known as Hog Island, the decidedly romantic park got a lift when beach cottages were built in the 1930s and the name was changed to more accurately describe its allure. The cottages are gone, but more than a million visitors enjoy the day trip to swim, surf, kayak, and search for seashells along the shore. (You can stay in the nearby towns of Dunedin and Clearwater Beach.)

Sunset Celebration at Key West’s Mallory Square is one of those bucket-list items every visitor must experience, preferably with a margarita from one of the nearby stands in hand. Key West is known for its party scene, but just around the corner from raucous Duval Street you’ll find the quieter Bahama Village neighborhood. Tour the “Little White House,” where Harry Truman stayed on vacation when he was president, and the Hemingway Home and Museum and check out the many cats said to have descended directly from Papa’s semi-famous six-toed cat. Just up Route 1, you’ll marvel at Seven Mile Bridge, which runs between mile markers 40 and 47, and Key Largo, where you can rent a bungalow and enjoy a slice of, what else, key lime pie.

Though Florida is justly renowned for its Atlantic beaches, the western shores of the state are beautiful in their own right and are home to one of North America’s finest seafood scenes, deserving equal footing with Maine’s lobsters, Maryland’s crabs, and Baja’s fish tacos. The marina in the village of Dunedin, for instance, offers locally caught cobia and mangrove snapper that are prepared and turned into tasty fish tacos. In Clearwater Beach, you can watch fishermen on the Pier (and try it yourself) and grab yourself some smoked mullet, salmon, mahi mahi, and mackerel at Ted Peters Famous Smoked Fish in nearby South Pasadena. Just across the Sunshine Skyway Bridge (which looks like a giant sailboat), check out Skyway Fishing Pier State Park, the world’s longest fishing pier, where the pelicans will entertain you with their antics.

A BEACH FOR EVERY PERSONALITY

It’s no secret that we’re fans of Siesta Key, just off the coast of Sarasota. The white sands of Crescent Beach are dazzlingly bright, composed of pure quartz that has made its way from the Appalachian Mountains down Florida’s rivers to settle here along the coast. (The Guinness Book of World Records says Hyams Beach in Australia has whiter sand, but we’re not entirely convinced.) Say “Florida” to most travelers and not only Siesta Key but an array of other white-sand beaches spring to mind. We’ve sometimes wondered if the state has a beach for every type of beachgoer. Turns out we were onto something: VISIT FLORIDA has published a Beach Finder app that allows you to adjust your interests and preferences to find the perfect Florida beach for you!

Along with beaches, fun in the sun, seafood, and America’s space program, Florida also boasts heaps of history. The city of St. Augustine, for instance, celebrated its 450th anniversary in 2015. (Yes, the city was founded more than 50 years before the Pilgrims landed on Plymouth Rock.) A trip to St. Augustine lets you travel back to the days of the Colonial Quarter and scenic Castillo de San Marcos, get your pirate on at Pat Croce’s St. Augustine Pirate and Treasure Museum, and take a “Frightseeing” ghost tour of America’s oldest city.

Discover Florida. With 825 miles of beaches and the world’s best theme parks, there are endless ways find fun every day in Florida. Starting planning your vacation today at VISITFLORIDA.com.