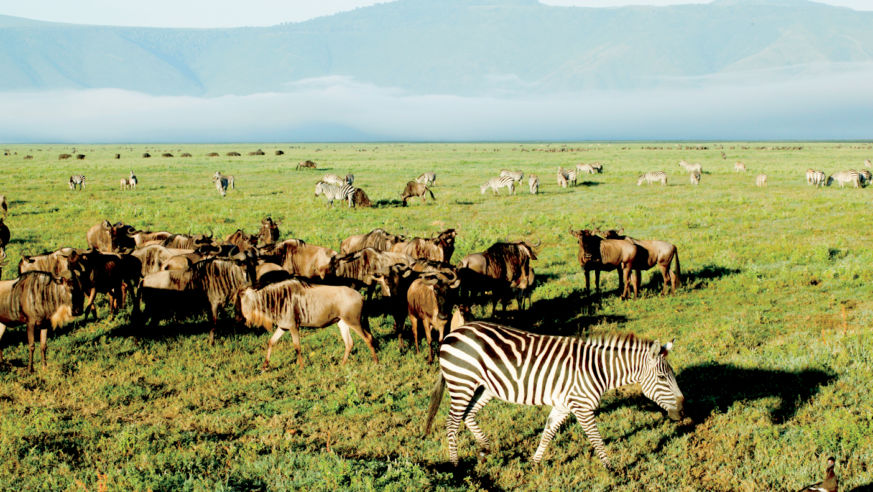 A tranquil morning at the Ngorongoro Crater in Tanzania.

The school bus can wait. So can the PTA and soccer practice. How one family put “normal” life on hold for a year and let adventure take center stage, traveling to four continents and learning which way the toilet really flushes south of the equator (among other things).

The proof came in the Serengeti, at the end of two weeks in Africa. My husband and I were hanging out of the top of a Jeep with our two sons, squinting into the early sun at a couple of lionesses returning from the hunt. As the big cats leapt onto a rock outcropping, Gus, 13, asked Jeb, 11, which animal he'd want to be. Jeb paused thoughtfully. "Well, it depends on whether you're talking about predator or prey and which habitat," he said. "Here in the grassland or up in the Ngorongoro Crater? In different environments, different animals have a better chance of staying alive."

As they compared notes on ecosystems, I remembered those food-chain diagrams that I'd been forced to memorize in biology, and I wondered how much time the boys would've had to fritter away in a classroom to internalize what had come to them so powerfully out on the savannah. This was the kind of moment my husband, Robb, and I had hoped for when we launched one unconventional year of homeschooling—using the world as our classroom.

Admittedly, travel plays an unusually important part of our lives. Robb shoots photos for National Geographic, and before we had kids, he'd been on the road maybe 300 days a year. I went with him as much as possible—Morocco, Cuba, Switzerland, Nepal, Bali, Thailand. We both grew up in small towns—he's from the Texas Panhandle, I'm from East Tennessee—and seeing cultural and natural wonders together gave us a bigger window on global events and led us to commit to following adventure wherever we could find it.

We're not rich by any means. We just live carefully, and Robb has always been a saver. Since the boys were little, we've socked away money to send them to private high school, if need be. Our ideas for that money changed when we met a couple from Louisiana whose online jobs freed them to travel from country to country with their two sons, homeschooling along the way. "You can do that?" I asked, hearing a door creak open in my brain.

Inspired, we diverted some of our nest egg to a smaller version of that experience—one school year of traveling, based where we could live cheaply: San Miguel de Allende, Mexico. We felt we could get more for our educational buck on the road than even in an elite private school classroom. Plus, the boys were at a golden age-old enough to understand what they were experiencing but young enough to like hanging out with Mom and Dad. We wanted to keep them close as long as possible.

After standardized tests revealed that they were above grade level in key areas, we decided a year away from "proper" school wouldn't hurt, especially if we kept up on fundamentals like math and English. We tackled South America first, so the boys could use the Spanish they'd been learning since they were little. We sketched out where we wanted to go—the Galápagos and Machu Picchu topped the list. Robb asked me to come up with a budget, to see how much territory we could cover without being extravagant but also without resorting to camping.

I spent hours scouring the Internet for bargains and experiences that were authentic, not expensive. I loved the challenge; it felt like a logistics version of Rubik's Cube, getting all the pieces to fit as cheaply as possible. If my projections came in high, Robb would suggest that three nights on a boat without a bathroom would be exciting. That motivated me to find more cuts. I began by reading through TripAdvisor forums and casting a wide net on Google, going beyond the first few pages since I might find blog mentions or lesser-known sites deeper in. Sometimes, searches yielded just what I'd find in guidebooks, but frequently I'd uncover a gem like andeantravelweb.com, run by a nonprofit to give independent recommendations on travel in Peru.

Fortunately, we had Robb's frequent-flier miles and some hotel points from my dad. It also helped that we could travel in the cheaper off-season, since we weren't locked into jaunts on school holidays. Our mentors, the Internet couple who did this as a lifestyle, advised us to rent apartments where possible. Renting saved money, and apartments usually came with creature comforts (DVD players, washing machines, etc.). The occasional trekker's hostel or overnight train helped keep the lodging line-item under control.

We started with a two-week trial run to Ecuador—we wanted to see how much learning would actually take place on the road. The trip was filled with scientific and geographic aha moments: swimming in a lagoon in the Ecuadorian rain forest and discovering that piranha won't eat people; seeing for ourselves that toilet water does flush in the same direction north and south of the equator. In a letter to my parents in Tennessee, Gus—who like all of us had prepped with documentaries on Charles Darwin—said that seeing finches, tortoises, and blue-footed boobies in the Galápagos "makes me understand Darwin's ideas about evolution on a different level."

We were so pleased that we booked a six-week tour of other South American countries, with a budget of $92 per person, per day. In Peru, we immersed ourselves in Inca-ology. We'd read Kim MacQuarrie's The Last Days of the Incas as a sort of homework before the trip and were thrilled when we got to feel the astonishingly perfect cuts made by 15th-century stone workers at Machu Picchu. We booked a $20-a-night homestay in an Andean village and ate an unforgettable dinner of quinoa soup around the home's open fire while dozens of guinea pigs—which the family raised for meat—scurried across the dirt floor. We learned about glaciers and trekked on one in El Calafate, Argentina. Along the way, the boys were blogging on our family website (kendrickworldclass.com), which prevented what I called "destination dizziness" and allowed us to work on their writing.

But halfway through the trip, my planning hit a snag. Yes, the scenery was gorgeous in Torres del Paine, Chile, and Bariloche, Argentina. But we spent much of our time hiking, biking, and shopping. As Robb said, "We could have done that in Colorado for a lot less." I realized an important distinction: We weren't on vacation; we were in the midst of an extreme field trip, where the fun (and there always was plenty) was the gravy, not the meal.

Going on Safari
After that leg, we regrouped in San Miguel de Allende. While the boys boned up on math and science (with the help of an expat teacher), I dug around the Internet to prepare for the next destination the family picked: Africa. I also was on the lookout for ways to get beyond obvious subjects to study (such as zoology) and push deeper into culture. Having traveled extensively, I felt comfortable making my own arrangements. Africa was different. Do-it-yourself touring seemed more difficult in the wildlife parks, so I consulted a travel company, Africa Adventure Company. That added to the cost, but it felt necessary.

Through the travel company, we found a volunteer safari where we stayed in basic accommodations and helped with community projects in a small town in Kenya called Kiteghe. We built the foundation of a co-op where the local women could sell their sisal baskets, and the boys helped make posters for a third-grade English class. The title of one: "Dangerous Animals on the Way to School." The boys still talk about what it would be like to run into a hyena on their daily commute.

When the travel agent heard we were on an educational mission, he suggested we visit the Hadza bushmen, in Tanzania. These genial people from the edge of the Great Rift Valley are some of the last true hunter-gatherers on earth, living much the way our ancestors did thousands of years ago. Instead of observing a yawn-inducing museum diorama about early man, we spent a day running through an acacia-tree jungle, chasing the wiry Hadza as they tried to bring down a vervet monkey with their arrows. We felt the smooth twigs from sandpaper trees they used for weapons, tasted a squirrel roasted over a fire made without matches, and even learned a few words of their clicking language. "Nu-beh-uh"-thank you-the boys said when we parted after a fascinating day, "Nu-beh-uh," I repeated as I shook the smiling chief's hand. For more than you realize, I thought to myself.

After Africa, we spent a month in France for French immersion classes and visits that would illuminate art and history. During our 18 days in L'Isle-sur-la-Sorgue, an hour north of Marseilles, we fell into a lovely routine—shopping at the local markets for goodies, then cooking and card playing in the evening. In Paris, we kept to a similar pattern. We always finished a day of sightseeing and brushstroke—analyzing in the Luxembourg Gardens so the boys could romp around and talk to French kids. Then we had dinner in our apartment on the Seine. We found it much cheaper to indulge in French cuisine only at lunch and as a result finished the trip $100 under the $1,200 budget for a week of food and activities, which I thought was a supreme accomplishment.

To satisfy Gus's curiosity of all things World War II, we made a three-day detour to Normandy, where our favorite site was Pointe du Hoc, a spit of land that Army Rangers scaled on D-day to knock out big German guns. The boys loved roaming the place nearly exactly as it was in 1944-crater-pocked from exploding American bombs with broken German bunkers throughout. I didn't realize how much Gus absorbed until we were on the flight from Paris to the U.S. and he was talking to an American businessman and fellow World War II buff. "I looked over the cliff when we were in Pointe du Hoc, and I think what may have helped the Rangers get up was an overhang that prevented the Germans from shooting. I've never heard that before. It's just one of my theories," he said with so much authority I had to smile. I had no idea he had his own D-day theories. Maybe a thesis is next?

I learned something else on the way home—how to make lemonade out of the inevitable travel snafu. On the start of our Atlantic crossing, we got diverted to Iceland because of a chemical spill in our plane's cargo hold. We grumbled about our eight hours in the Reykjavík airport, but after we got home, news broke that a volcano in Iceland had erupted, disrupting flights across the Atlantic. Because we'd had our own Icelandic plane issue, we were immediately hooked. We followed the ash cloud daily, and I capitalized on the boys' interest by studying Iceland's volcanic and geothermal geography. "If it had erupted one day earlier, we might still be stuck there," Jeb said with glee. "We could have gone up to see the volcano ourselves." That might have been a little extreme, even for us. But I sure liked his thinking.