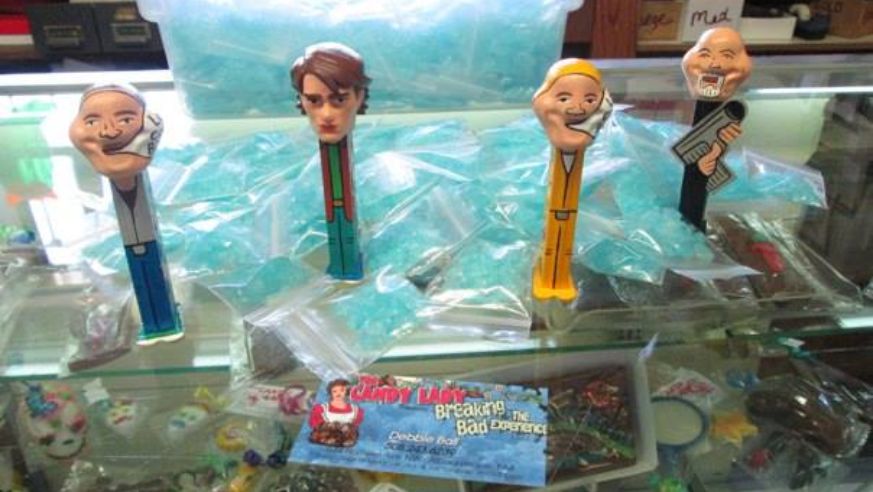 Fans can purchase "blue ice candy" and other Breaking Bad merchandise from The Candy Lady in Albuquerque's Old Town.

As the commercials said, all bad things must come to an end. Breaking Bad may have ended, but we've got three ways fans of the show can still get their fix.

If you're lucky enough to be anywhere near Albuquerque, N.M., where nearly the entire series has been filmed, catch a ride on The BaD Tour by the Albuquerque Trolley Company, a 3.5 hour open-air joyride that covers 38 miles and 13 main locations from the show including the exteriors of Walter White, Jesse Pinkman, and Gus's houses, the car wash and laundry facilities that act as the meth-maker's storefronts, Tuco's headquarters, the ever-shady Crossroads Motel, and the infamous railroad tracks. To top it all off, you'll get a complimentary drink during a stop at Twisters Grill, the restaurant that doubles as Los Pollos Hermanos on the show. Tickets cost $65 per person including taxes and leave from Hotel Albuquerque at 800 Rio Grande Blvd NW in Old Town. Check website for available dates and to purchase tickets online. Please note that the tour is rated 'R' because of the show's dark subject matter and may not be appropriate for children.

If you're short on time or if tickets happen to sell out due to the tour's popularity, the Albuquerque Trolley Company also offers an 85-minute long Best of ABQ City Tour, featuring a peek at several major sites from the show like Jesse Pinkman's house and Hank's DEA office during a fun trip through Historic Old Town, Museum Row, Nob Hill, the University of New Mexico, the historic Barelas neighborhood, and along Historic Route 66. Tickets cost $25 for adults and $15 for children under age 12. Tours leave from Hotel Albuquerque at 800 Rio Grande Blvd NW in Old Town.

If you'd rather discover the magic of the Breaking Bad locations yourself, the Albuquerque Convention & Visitors Bureau's website lists places of note and information for a self-guided tourof the hotspots like Los Pollos Hermanos and the Octopus Car Wash, both featured in the series. DIe hard fans of the show should not miss the chance to buy iconic "blue ice candy," rock candy colored to look just like the main characters' special product, from The Candy Lady, a specialty sweet shop located in Albuquerque's Historic Old Town. Also for sale are a slew of Breaking Bad t-shirts and other merchandise including Walter White's signature black hat. Blue ice candy packages sell for $1 each and are also available online—five packages for $5 and 10 packages for $10, plus shipping and handling. Walter White's hat replica sells for $45 in the store and online.