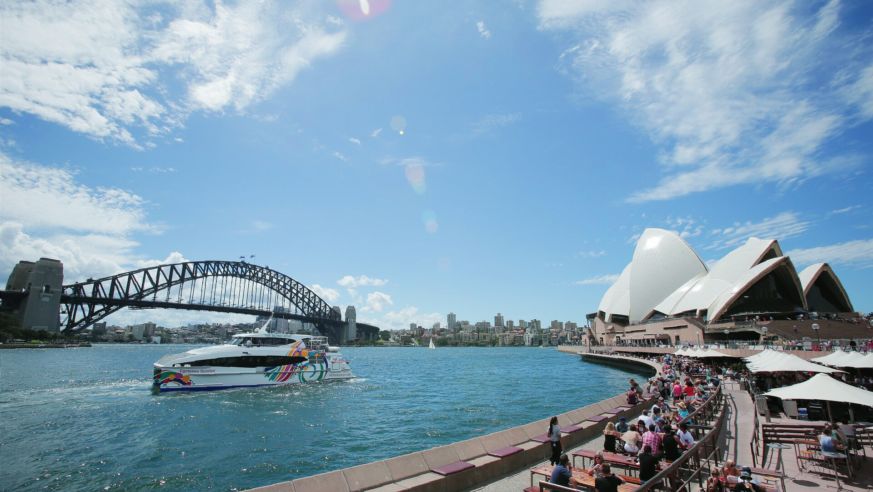 Enjoy beautiful views of the Sydney Opera House and Sydney Harbour Bridge as your explore this exciting city.

A little bit of planning goes a long way as Sydney is full of natural beauty, hidden hotspots, and exciting events. The best part: many of them are free. Here are a few suggestions to kick off the fun on a dime (or an Aussie 10 cent piece!):

Undoubtedly, Circular Quay and its surrounds are usually among the first stops for visitors to the city. Two of the city's great icons, the Sydney Opera House and Sydney Harbour Bridge are in the same cityscape, which makes for a brilliant scene at the cheap price of free. Buskers including didgeridoo players line the wharves, entertaining the crowds in exchange for a few dollars, adding to the atmosphere of this iconic Sydney scene.

Just behind the Opera House is the Royal Botanic Gardens—a great place to visit, sharing its spectacular visuals over the harbor without charging an admission fee. Plan to spend a minimum of one hour there, as anything less won't be enough to take it all in! My favorite time to be there is as the sun falls and the flying foxes, which sleep in trees across Sydney's parks during the day, take to the sky, bringing a new light to the city.

Want to explore Sydney Harbour? Look no further than the ferry. Though some people take the ferry to and from work each day, this way to travel is much more than just a means to commute. It's an attraction in itself. Arguably the most scenic route is the one between Circular Quay and Manly. It's one of the best ways to see Sydney Harbour—from the water—and seriously beats out other options in terms of price. Once in Manly, you can visit the beaches, cool cafes, and even the breeding grounds of Little Penguins that hang out under the wharf and come out in the evening.

There's no doubt that along the way, hunger will strike. If you're anything like me, when it comes to eating experiences, authenticity is a big factor. One of the biggest secrets around is Eating World, hidden up the sleeve of the city's Chinatown. It's a food court that immediately reminds you of the Chinese or Singaporean "hawker" that locals enjoy so commonly. Walk to the stall that has the type of food you want, choose from the picture menus built into the wall, and pay an incredibly fair price. When I eat, I want good food, period. Saving a few bucks at the expense of décor but getting food as authentic as possible is the perfect tradeoff.

Another take on getting full by reasonable means will take you straight into the history-laden The Rocks precinct of Sydney. Each Friday, from 10 a.m. to 4 p.m., the Rocks Foodies Market sets up stalls full of fresh, locally-produced foods like lamb kebabs, barbequed salmon, Turkish gozleme, bottled oils, an array of sweets, and the all-time Australian favorite: gourmet meat pies. The food itself is very satisfying, but so is paying around AU$5 for a solid lunch.

When you're ready to work off all that amazing food, having an adventure is some of the best exercise. As a visitor to Sydney, you'll likely find yourself at the iconic Bondi Beach. You can capitalize on the Bondi to Coogee coastal walk—it's a decent hoof with some of nature's best aesthetics on offer. For those seeking something more casual, Bondi to Bronte is slightly less aggressive, but just as serene. And just as a reminder, this comes at the cost of $0. Perfect! Back in Bondi, why not try your hand at surfing or paddle boarding—renting a board is cheap—and afterwards, check out the North Bondi RSL for a good-value bite of food and a cold drink with a view over the beach that's hard to beat.

You'll be told that Australia has good coffee over and over and nobody is wrong when they say that. There are many small roasters in Sydney, and some are exceptional. Buy bags of "filter roast" beans from the likes of Mecca Espresso, Single Origin Roasters, Rueben Hills, or Sample, and brew at home! A single-cup cone filter and some boiling water is all you need to make the same (or arguably better) cup of coffee.

Sydney is one happening city. There seems to be something going on every second of every day. What's even better than the variety and frequency of the city's festivals, exhibitions and spectacles, is that many are free to the public, like Vivid Sydney. An 18-day festival of light, music and sound, Vivid is held May 23 to Jun. 9 this year, and a chunk of the program is free. Last year, more than 800,000 people attended the event, which features giant light installations and light projections, covering iconic buildings such as the Sydney Opera House and Sydney Harbour Bridge, as well as music performances, talks and creative workshops.

A great free event is Biennale, Australia's largest and most exciting contemporary visual arts festival. Held every two years, the Biennale is a three-month exhibition with artist talks, forums, guided tours and family days—all free. This year, the event runs Mar. 21 to Jun. 9, with a program highlighting tours and performances at Sydney Harbour's largest island, Cockatoo Island, just a short ferry ride from the CBD.

So where will you be staying during all of this? Accommodation is routinely the biggest expense for most travelers, but it doesn't have to be. Consider the Sydney Harbour YHA - The Rocks as it will probably make you rethink what's considered to be a hostel. Nestled high up in The Rocks precinct, it has a view like no other: Sydney Harbour Bridge to the left, Opera House to the right, and the Harbour in the middle. The rooftop terrace there is the perfect place to grab a drink and meet some new friends. YHA has multiple locations across the city, all of them worth considering.

Beyond these tips, definitely hop on www.sydney.com. It's a massive wealth of information, with hyperlinks out to practically every event or festival going on in the city, a great tool for planning a trip before you get to Sydney, or searching for inspiration sporadically while you're in the destination. And last but not least, when you're looking for tips, ask a local! Sydneysiders (and Aussies in general) are typically more than happy to provide information about their city and are excited to share their personal favorites hidden about. I've gotten some of my own best tips from locals and strongly recommend it. To this tune, you can also ask me! I've been living in Sydney and travelling around the State of New South Wales (NSW) since mid-December 2013 and have picked up plenty of tips and tricks along the way. You can check out my adventures on social media and of course, feel free to shoot any questions or suggestions my way, tagging in #funster.

This article was written by Andrew Smith, Destination NSW’s Chief Funster. Hailing from Orange County, California, USA, Chief Funster Andrew Smith has been tasked with showing that New South Wales, Australia, is the most fun place in the world for youth travellers. He's responsible for The Funster Experiment—a challenge set for him by Destination NSW to uncover 802,000 moments of fun—one for each square kilometre of the State. He's spending six months travelling around NSW in search of fun activities, events, and attractions, and sharing his finds with travellers from around the world via social media. Tracking his progress is a real-time tally of fun moments, featured on the The Funster Experiment hub at www.sydney.com/workstudyplay.