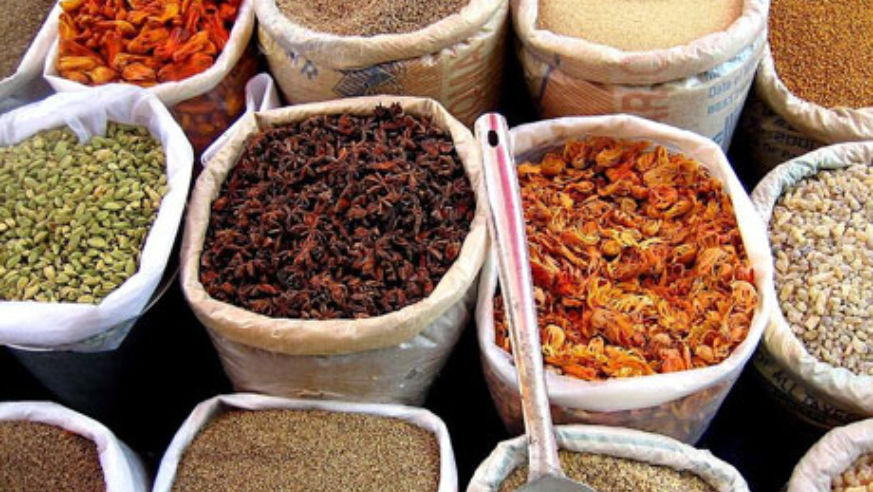 While the spice levels are toned down when compared to its Southeast Asian neighbours, traditional Myanmar fare proudly stands on its own with strong flavors, unique offerings, and its rich mix of spices.

Myanmar's rich and varied cuisine is a direct reflection of its fertile land, variations in climate, and ethnic diversity. Having been fairly isolated from much of the world until recently, the country's culinary influences have come almost exclusively from neighbouring countries like India, China, and Thailand. While the spice levels are toned down when compared to its Southeast Asian neighbours, traditional Myanmar fare proudly stands on its own with strong flavors  like ngapi (shrimp or fish paste), unique offerings like laphet thoke (a salad of pickled tea leaves), and its rich mix of spices such as turmeric, lemongrass, tamarind, and cilantro.

A Typical Meal
Rice and noodles are staples nationwide and are normally served at every meal. However, lunch is generally regarded as the main meal of the day. A typical Myanmar meal usually consists of a main dish of curried meat (often mutton or goat) or seafood depending on location and availability. Curried vegetables and salad often accompany the meal. A soup is a requisite part of a Myanmar meal, but plays the role of beverage, as wine and water are not customary. And when soup is not available, green tea is the next best thing.

Snacks
During the rest of the day, people snack. Savory snacks like Myanmar's unofficial national dish mohinga (fish broth with rice noodles) and ohnnoh khaukswe (coconut noodle soup with chicken or fish balls) are typically enjoyed at breakfast. The most popular Myanmar sweet snacks like shwe yin aye (coconut cream sherbet) are made from rice and/or coconut sweetened with sugar or jaggery (palm sugar). Some unusual and delicious varieties of fruitare available as well, especially at the local markets.

Desserts
While most people outside of Myanmar would not consider pickled tea leaf salad a dessert, laphet thoke often finishes a meal. Thagu (tapioca pudding sweetened with coconut jaggery) may provide a sweet finish to a typical meal, while shwe kyi (semolina pudding) and kyauk kyaw (seaweed jelly with coconut milk) are sweets reserved mostly for special occasions.

Dining Etiquette
Eating is an important social activity to the Myanmar people. During meals, dishes are placed in the middle of the table to share among the group. Eating with the hand is commonplace; however, it is always with the right hand and never with the left as this is considered unclean. Noodles are eaten with chopsticks. And it's not completely uncommon to be offered a fork, spoon, and sometimes a knife. When using a fork and spoon, the spoon is used to eat from while the fork is used to push food onto the spoon.

Myanmar has been isolated from most of the world until very recently and so has remained untouched in many ways, including its culinary influences. But as this Southeast Asian nation continues to open its doors to tourists and diplomatic relations, the culinary landscape will no doubt shift as global food brands and other international influences slowly seep into the cultural zeitgeist as they have everywhere else. And on the other side of those doors, as Myanmar begins to showcase its rich culture to the rest of the world, there is no doubt that its flavours will also begin to bear influence on the international culinary scene.

This article was written by Marianne Comilang, an adventurer filled with wanderlust. Originally from Toronto, Canada, she traverses across continents and can proudly say she has set foot on every one (except Antarctica). If she isn't writing, editing, and strategizing to make others look good, she is probably teaching yoga or posting on her blog MoveStillFree.com.