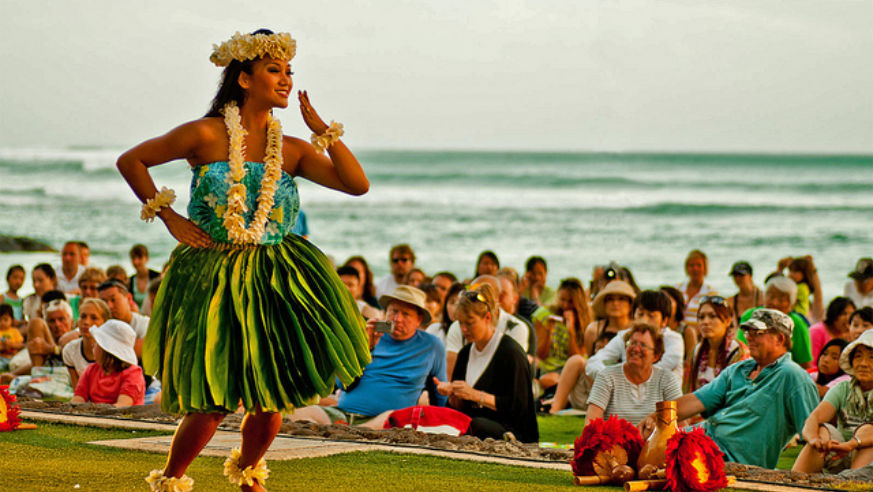 Your challenge, should you choose to accept it, is to learn the hula in Hawaii!

This article was written by the Viator Travel Team on behalf of Viator.com.

Great art isn’t always found in museums. Dance varies from place to place, yet remains a constant way for people to express themselves. Whether performed in a grand theater or on a street corner, dance can be emotional, tell tales, or be a way to celebrate. Whatever the reason or venue, the rhythm is out to get you. Grab your passport and take on a calorie burning challenge with these dances to watch and learn around the world.

Brazil’s national dance, the Samba is actually African in origin, brought to the country by slaves. It has many variations, but the samba is lively, rhythmic, and often colorfully costumed. Its speedy steps can make the learning curve a bit steep. Samba is popular in Rio, especially during Carnival, but performances like the Plataforma Samba Show in Rio de Janeiro take place throughout the year.

Fast and lively, this Spanish dance is said to have originated in Andalusia. Vigorous hand clapping, heel clicking, and arm movements come together to create flamenco’s expressive identity. The rhythms and moves are challenging for most first timers, but at the same time typically a whole lot of fun. Experience Seville: Learn How to Dance Flamenco is open to dance enthusiasts with or without a partner. One-on-one coaching will enable even beginners to hone their skills and take home a new talent.

It takes two to Tango. An Argentinean dance, couples need good balance to make long pauses in difficult positions. It’s believed the Tango got its start in the poorer neighborhoods of Buenos Aires, Argentina, in the late 1800s. Timing is key; knowing when and how fast to walk, and just as important, when to freeze. Buenos Aires Tango Shows will get you excited, but a Buenos Aires Tango Show, Dinner and Dance Lessons will give you a first-hand taste.

Sometimes called Jarabe Tapatio, the famous Mexican Hat Dance is a courtship folk dance. At first the woman is not interested, but with time warms up to the convincing suitor. Men traditionally dress as a charro, in black with decorative silver trim. Women wear blouses and long, full skirts that are also heavily decorated or embroidered. The dance and the costumes have become easily recognizable and representative of Mexico. The Mexican Hat dance can pop up when you least expect it; seemingly easier to pick up than other dances from around the world, onlookers are sometimes encouraged to join in.

A combination of dance, drama, and chanting, the Kecak dance was created to entertain tourists. Always performed just before sunset, it tells the Hindu story of Prince Rama and how he defeats an evil king to rescue his princess. As storytellers weave the tale, a choir of sometimes 100-plus men sitting in circles chant while swaying back and forth and waving their arms and hands. Visit Bali and you can see the Kecak dance at many locations, but the performance at Uluwatu Temple gets rave reviews.

There are many variations of the waltz, but one could argue the whirling Viennese waltz is the most famous. Continuously turning left and right while moving counterclockwise around the dance floor, dancers move fluidly to slow, melodic music. “The Waltz King,” composer Johann Strauss was famous for his Viennese waltzes. He wrote nearly 500 dance pieces during his lifetime in Vienna, of which more than 150 were waltzes. Studios around the world offer dance lessons, but traveling couples can learn the basics of the dance Strauss helped make famous when in Vienna by taking Viennese Waltz Dance Lesson for Couples.

Riverdance and Lord of the Dance helped modern Irish Step Dance gain popularity and recognition. Done solo or by a group, dancers keep their upper bodies stiff while performing quick and fancy footwork. Costumes play a large part, and girls costumes are known for being decorative and costly. Two types of shoes are worn, soft and hard. When hard shoes are worn, a noise similar to that of tap dancing is made. You don’t have to be in Ireland to see a show. Due to the dance’s popularity, performances can be seen all over the world.

Belly Dancing in Egypt and Turkey

Performed on stages and restaurants around the world, belly dancing is said to be a Western coined phrase for the Middle Eastern dance Raqs Sharqi. Though it can be performed by men, it’s most commonly done by women; it’s a sensual dance in which abdominal movements typically wow the crowd. Shakira makes it look easy, but if you’re up to shaking your hips, you can learn the stomach ripple too. Dancers of all levels can shake up their vacation with a Belly Dancing Lesson in Istanbul with Optional Dinner and Show.

Fandango in Portugal and Spain

Believed to be a Spanish courtship dance with Moorish origins, Fandango is popular in Portugal and Spain. It’s lively and upbeat; dancers tap their feet and quickly change positions. It can also be danced by two men as a contest of skill. The first dancer sets the rhythm and steps, then the second tries to take the dance up a notch.

Hopak in Ukraine / Gopak in Russia

This Ukrainian folk dance is full of improvised acrobatic feats including jumps, spins and squats. Traditionally danced in the Ukraine and Russia by men, modern versions can include all. Energetic and almost infectious, it’s hard to sit still during a performance. Lessons can be found, but strength and fitness are essential.

There are more than half a dozen types of Zulu dances, each steeped in culture and tradition. The dances represent many aspects of daily Zulu life; hunting, war, coming of age, or weddings. Drums and whistles often accompany the dances. Local tribe dancing is performed at the Shakaland—Zulu Cultural Center in South Africa.

Sports fans may know this dance as part of the pregame preparations of New Zealand’s rugby team the All Blacks. A traditional Maori dance, the Haka can be performed in times of war and peace. There’s foot stamping, loud chanting and body slapping. In addition to All Blacks rugby games, the Haka is performed at villages and museums throughout New Zealand, along with city sightseeing tours in Auckland.

Hula has come to symbolize Hawaiian culture. Like other dances, there are many types and styles. Along with festivals and competitions, Hula performances are held regularly at hotels and resorts. Hula lessons, often free, are a fairly common activity in Hawaii’s popular tourist areas and brave guests at Maui Luaus are often brought on stage to show off their dance skills.

Clogging in the Netherlands

Most people in the Netherlands, dancers included, don’t wear clogs anymore. Clogging was once done in wooden shoes, but today a more modern, yet equally noisy shoe is used. Clogging involves fast footwork and is somewhat of a mix of tap and line dancing.

Polka in Czech Republic and Poland

American bandleader Lawrence Welk introduced fans to all types of easy listening music; from his famous champagne music to upbeat polkas. A lively dance with Bohemian origins, its history differs depending on who is doing the telling. Though many believe the polka is polish, the dance did not originate in Poland. Some say it is a Czech folk dance, but refers to a Polish woman. Polish immigrants who moved to the U.S. after World War II adopted it as their own, helping it become fashionable in America. Either way, its popularity spread throughout the world and is still being danced today.