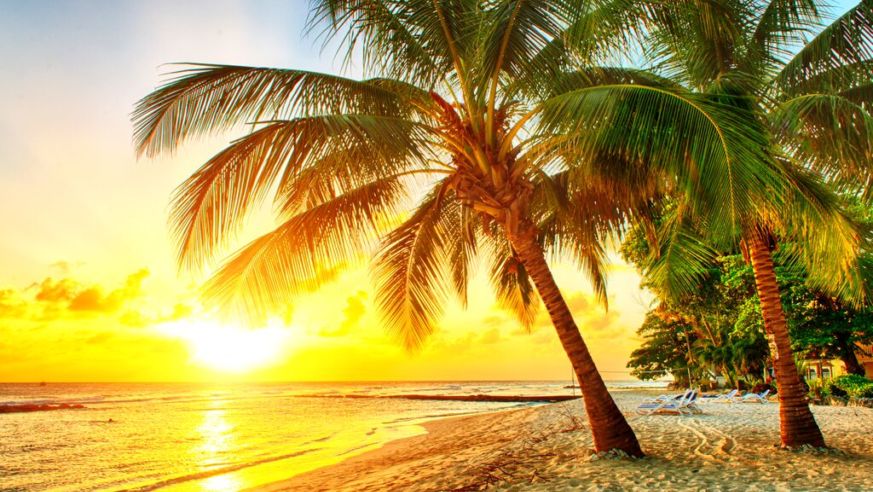 The amazingly varied (and amazingly delicious) cuisine of the Caribbean is, both literally and figuratively, a “melting pot” of cultural influences, blending African, Spanish, Indian, Chinese, and indigenous Taíno ingredients and methods for centuries. Here, an island-by-island guide to the delicacies that have our mouths watering this cruise season.

While dishes like conch fritters and coconut shrimp have come to represent the region on the world stage, these old stand-bys barely scratch the surface of the unique (and underrated) eats available here. In fact, there are nearly as many hyperlocal takes on Caribbean cooking as there are islands—and delicious fish—in the sea. Here, an island-by-island guide to the delicacies that have our mouths watering this cruise season.

Don’t expect light beach fare from this tropical destination. The Dominican take on Creole cooking, with influences from as far and wide as Africa, Spain, and the Middle East, is a remarkably hearty affair. For proof, look no further than the typical breakfast los tres golpes (or “the three strikes”), which includes fried cheese, fried salami, and fried eggs, plus a heaping scoop of mangú (mashed, boiled green plantains). And if you somehow have room for lunch, the iconic la bandera (“the flag”) is comprised of stewed meats, red beans, white rice, and fried green plantains. Just try going back to work without taking a nap first.

BE SURE TO ORDER:Sancocho de siete carnes, a stick-to-your-ribs stew of seven meats, including sausage, chicken, beef, pork, and goat, plus an assortment of vegetables, such as corn on the cob, green plantains, yam, pumpkin, taro, and cassava. The finished product, which is thought to be an excellent hangover cure, is served with white rice and sliced avocados.

WHERE TO TRY IT: Travesías, housed in a quaint baby-blue cottage with a sprawling bright-white porch (Avenida Abraham Lincoln 617, sancocho artesanal siete carnes $9).

The Bahamas is comprised of more than 700 islands and coral reef cays, so it’s only natural that the cuisine here would have a particularly strong link to the sea. Most staple dishes offer well-spiced but simple preparations of locally caught seafood like grouper, conch, and spiny lobster. And at just 50 miles from the coast of Florida, the country also shares a culinary heritage with the American South. Take, for example, the popular johnnycake, an all-purpose bread that calls to mind the cornbread you’ll find beside most soul food meals.

BE SURE TO ORDER: Cracked conch (pronounced “konk,” if you please) with peas ‘n’ rice. The mild white flesh of the iconic sea snail is pounded and then deep-fried into a cutlet and served with an extremely popular side dish of white rice cooked with pigeon peas, salt pork, thyme, and tomato paste. It’s just one of the many ways you’ll find conch on menus, including in chowders, fritters, simply grilled, or cured in a ceviche-like salad.

WHERE TO TRY IT:Goldie’s Conch House, which has been an area institution for more than 25 years (Arawak Cay, cracked conch with rice $15).

Dutch culture looms large in the ABC islands of Aruba, Bonaire, and Curaçao, which together with St. Maarten, Saba, and St. Eustatius, comprise the Kingdom of the Netherlands. You’ll see this link in the colorful gabled roofs in Oranjestad, Aruba, and Willemstad, Curaçao, and the annual celebration of Queen’s Day (expect lots of orange to celebrate the House of Orange-Nassau). But the Dutch connection is perhaps strongest on the islands’ menus, where you’ll find snacks like bitterballen (fried meaty croquettes) and frikandel (deep-fried sausage)—plus more exotic dishes from former Dutch colonies, such as Indonesian fried rice, or nasi goreng.

BE SURE TO ORDER: Keshi yena, which is made by stuffing leftover gouda or edam rinds with meat (chicken, beef, shrimp, or fish), flavored with raisins, grated cheese, olives, and capers. The dish dates back to the Dutch colonial era, when slaves would gather scraps—such as the seemingly unusable cheese rinds—and come up with clever ways to prepare them as a means of survival.

WHERE TO TRY IT:The Old Cunucu House, which occupies a traditional farmhouse that dates back more than 150 years (Palm Beach 150, keshi yena $11).

Unlike lush, verdant neighbors like Jamaica and Cuba, the Turks and Caicos is made up of 40 islands and cays that are arid, sandy, and tiny—perfect for a beach getaway, sure, but not ideal for agriculture. Aside from a few exceptions, such as drought-resistant corn, sea grapes, tamarind, and sugar apples, the cuisine in these parts skews heavily toward the spoils of the surrounding seas, with menus featuring wahoo, grouper, snapper, tuna, and dolphin (the fish, not the mammal!). And it’s no coincidence that the flag of the Turks and Caicos prominently features both a conch and a spiny lobster: They’re two of the island’s tastiest and most prized delicacies (and exports).

BE SURE TO ORDER: Spiny lobster, a clawless tropical variety that’s called crawfish by locals. Only legally available in-season from August through March, the prized crustacean is best served simply grilled.

WHERE TO TRY IT:Coyaba Restaurant, where lobster is featured in a number of haute creations, like a bisque with sherry and aged rum and lobster thermidor in a dijon-sherry cream sauce (Caribbean Paradise Inn, Grace Bay, Providenciales).

It’s telling that two of the most popular flavorings in Jamaica are Scotch bonnet peppers and allspice: The cheerful-looking chiles can be almost 150 times hotter than jalapeños, while allspice (the dried berries of the pimento tree) is so aromatic that many home cooks assume that it’s actually a blend of clove, cinnamon, and nutmeg. In a word, Jamaican cooking is bold, with iconic dishes borrowed from its many immigrant groups: from Spanish Jews, vinegary escovitched fish; from Indians, curried goat; from the British, Cornish pasty–inspired patties; and from West Africans, the lychee-like fruit ackee, which is cooked alongside saltfish to make the island’s most iconic breakfast.

BE SURE TO ORDER: Jerk chicken, which gets its fiery and complex flavors from fresh ginger, thyme, scallions, Scotch bonnet peppers, and allspice. In the authentic Jamaican version, the chicken is cooked over the aromatic smoke of burning pimento wood—a practice that dates back to the native Taínos. The jerk style was born when escaped slaves, or Maroons, retreated into the forest and taught the indigenous tribes their method of smoking meat over pits dug into the earth.

Perhaps the only cultural icon from Barbados more famous than Rihanna is the flying fish—a remarkable species that uses its wing-like fins to propel through the air at distances up to a whopping 1,300 feet. In fact, the island often gets called the Land of the Flying Fish. But it’s not the only species hauled in from the warm waters surrounding the island, which are teeming with game fish, such as marlin, tuna, shark, and mahi-mahi. While much of Bajan cuisine is influenced by rich Indian and African flavors, perhaps the best way to appreciate the sea’s bounty is also the simplest: The cutter is a humble sandwich of deep-fried fish on crusty Bajan salt bread, topped with lettuce, tomato, and pepper sauce.

BE SURE TO ORDER: Flying fish and cou cou (made with cornmeal and okra), the national dish—which, not coincidentally, was once namechecked in a Rihanna song. Now often served with a tomato-based creole sauce, the cou cou was once a staple food for African slaves and is still a popular dish throughout the Caribbean.

The culinary melting pot in this two-island nation skews decidedly East Indian, a holdover of the indentured Indian servants who streamed into the British Imperial colonies starting in the 1840s to provide plantation owners cheap labor in the post-abolition era. These days, more than 35 percent of the population can trace their roots to the Subcontinent—greater than any other ethnicity—which accounts for the intensely aromatic flavors found in dishes like curried goat and roti (flatbread-wrapped sandwiches).

BE SURE TO ORDER: Doubles, an inexpensive street food made by filling light, chewy bara (fried flatbread, tinged yellow with turmeric) with channa (curried chickpeas), topped with cucumbers, pepper sauce, mango chutney, and tangy tamarind. Often eaten for breakfast and sold from humble carts, the local spin on the Punjabi chole bhature got its descriptive name when customers in the 1930s demanded that the sandwich’s creator double up on the deliciously crisp bara.

WHERE TO TRY IT: Any of the unassuming food carts in the southern Trinidad town of Debe, which many consider to be the capital of doubles.

Perhaps no food better represents Puerto Rico than sofrito, a paste made by frying onions, garlic, green peppers, sweet ají dulce chiles, cilantro, and a local herb called culantro or recao in olive oil or lard. Much like this flavor-packed ingredient, which forms the backbone of many of the island’s most famous dishes, local cocina criolla (Creole cooking) was born by slowly melding together centuries of disparate culinary influences, including West African, Spanish, American, and indigenous Taíno. You can thank this last group for lechón asado (the island’s famed slow-roasted pork), not to mention the term “barbe-cue,” based on their word barabicu, or “sacred fire pit.”

BE SURE TO ORDER:Mofongo, made by mashing green plantains with garlic and chicharrones (deep-fried pork rinds). Thought to be a Caribbean update on the doughy African staple fufu, the dish is traditionally prepared with a wooden mortar and pestle, or pilón, which traces its roots to the Taínos. The starchy base can then be eaten as a side or stuffed with a protein to become mofongo relleno, at which point it is often doused in a tomato-based salsa criolla.

WHERE TO TRY IT:Café Puerto Rico, where the mofongo relleno can be ordered with a range of different bases (yuca or green or sweet plantains) and fillings, including crab, salt cod, grouper, or shrimp (208 Calle O’Donnell, mofongo relleno from $10).