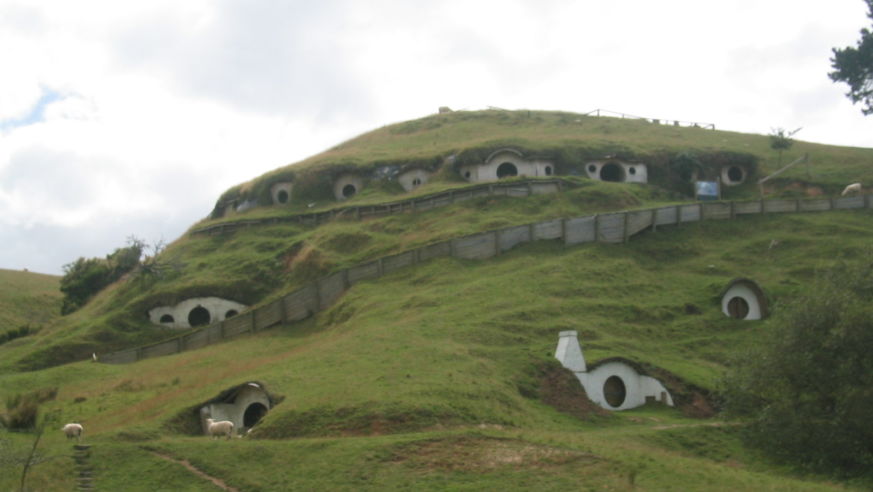 Every Lord of the Rings fan should pay a visit to Hobbiton in Matamata, New Zealand.

These are some of the staggering statistics behind the logistics of filming the latest in The Hobbit trilogy. Though much of the movies were shot in a Wellington studio, nine weeks were spent in the New Zealand countryside filming in surroundings that excite the imagination. From the rolling green hills of Matamata to the soaring peaks of the Southern Alps, the scenery of New Zealand is so phenomenally enchanting that it's almost too perfect to be real.

In fact, while filming the movies, many of the cast expressed concerns that viewers would think the landscape was fake. How, they argued, could moviegoers believe that such stunning scenery is real? Where in the world do thundering waterfalls, turquoise lakes, volcanic pinnacles, and alpine glaciers all occupy a terrain with hardly any people? Luckily for travelers to New Zealand, this fantasy-world of rings and hobbits was shot in a very real place, and thanks to the convenience of movie-themed tours, it's easy to visit the same outposts where dwarves and trolls once voyaged. To take a walk in the footsteps of The Hobbit, here is our guide to many of the locations where scenes from the movies were filmed.

Matamata
Seeing as most visitors fly into Auckland—and that the epic journey all began in The Shire—it only makes sense that Matamata should be the first stop on a Hobbit-themed holiday. This rolling pastureland three hours south of Auckland offersthe famous setting for Hobbiton, and after the filming of Lord of the Rings, the Hobbiton movie set was completely dismantled and the area returned to pasture. For the filming of The Hobbit, however, Hobbiton was constructed from permanent materials, and the captivating hamlet of life-sized hobbit holes is now a permanent North Island attraction. In addition to visiting Bag End—home of Bilbo Baggins—you can enjoy a meal in the Green Dragon Inn made famous in the Lord of the Rings. While Matamata is only a short drive from Hamilton, many travelers choose to visit as part of a guided tour. There are multiple tours which depart from Auckland, others which also visit Waitomo Caves, and an exclusive option to arrive early to tour around Hobbiton prior to the opening.

PioPio
Set in a remote section of the Waikato region, PioPio and the Mangaotaki Rocks were the famous site of Trollshaw Forest. At an area known as Denize Bluffs, huge shafts of rock plunge upwards from the forest and make the perfect setting for a secretive hideaway. Located 40 minutes south of Waitomo Caves and not far from the town of Te Kuiti, the setting itself is on private land and can only be accessed as part of a private tour.

Turoa
For local Kiwi skiers and snowboarders, the Turoa ski area is a popular part of the largest skifield in New Zealand. For those on the trail of The Hobbit, however, the area around Turoa is better known as the entrance to The Lonely Mountain. Also known as Hidden Bay, this grassy tussock and rocky slope has the feel of an alpine outpost, and it's also the area from The Lord of the Rings where Gollum chased fish through the river. Not far away—on the opposite side of the mountain—is the volcanic section of Tongariro Park which was home to Mordor and the famous Mt. Doom. Given the somewhat remote location and the distance from major cities (4-5 hours from both Auckland and Wellington), the best way to visit the area around Turoa is by providing your own transportation. While here, be sure to do some hiking in Tongariro National Park, and the Tongariro Crossing is often considered as the best one-day hike in New Zealand.

Wellington
In addition to being the nation's capital, Wellington is the home of Stone Street Studios where much of the movies were filmed. It's also the home of the Weta Cave, which is the legendary studio of special effects where much of the magic was born. Only 20 minutes from downtown Wellington, the Weta Cave is a must-stop destination for anyone who is a fan of the films. Inside this iconic compound of creative imagination, you can come face-to-face with replicas of the characters and learn about how they were brought to life on screen. Though access to the Cave is open to the public, you can also visit as part of a tour which spends the day traveling to filming sights around Wellington. For Lord of the Rings fans, spend the morning touring the Gardens of Isengard and the walk along the banks of the Great River Anduin. After passing the site of famous Helm's Deep, attend the workshop at the Weta Cave for a full day of immersion in Middle Earth magic.

Pelorus River
An hour west of the famous Marlborough vineyards—though not quite as far as the sunny coast of Nelson—Pelorus River is the only site in New Zealand where a collection of dwarves have rafted a river in wine barrels. The Pelorus River was used as an escape plan as a way to free the dwarves from Elvish imprisonment, and today is best visited as part of a guided kayak tour. For those who want to spend more time in the area, there is also a campground not far from the Pelorus Bridge where you can sit by the riverbank and re-enact the scene.

Queenstown
Known to most travelers as the adventure capital of New Zealand, areas around Queenstown were also the setting for some of the film's most dramatic vistas. On the outskirts of town, The Remarkables mountain range which is so popular with skiing also served as the setting for the mysterious Misty Mountains. An hour to the west of Queenstown, not far from the town of Glenorchy, Earnslaw Burn is the name of the glacier where Bilbo and company visit when leaving Rivendell. Today, visitors can walk in the footsteps of The Hobbit by lacing up their hiking boots and walking the Earnslaw Burn Track. Along this walk through the Southern Alps, glacial waterfalls cascade their way down mountains with such dramatic splendor that they seem to spill from the sky.

Twizel, Lake Pukaki, and Mount Cook
Situated high in the Canterbury interior, these expansive plains were the dramatic setting for many battles and panoramic vistas. Mt. Cook and the neighboring Southern Alps feature prominently in the backdrop of many aerial shots, and the turquoise-infused Lake Pukaki was the setting for Laketown—the city which is featured in The Desolation of Smaug. Small group Hobbit tours visit filming locations around Twizel, which itself is located over three hours from Christchurch. For those who are staying in the city of Christchurch, you can also take a Lord of the Rings tour to Mt. Sunday which was used as the setting for the city of Edoras.

Strath Taieri
Located an hour outside the city of Dunedin, Strath Taieri and the Rock and Pillar Range are the remote outposts used for many of the chase scenes. The Hobbit cast members were forced to use helicopters to access many of the locations, although physically-fit hikers can access the craggy ridgeline by a series of walking tracks which weave through the hills.

Fiordland
Finally, the filming of The Hobbit could never be complete without a series of scenes featuring footage fromFiordland. Of all the footage which was gathered from Fiordland, the iconic landmark which is immediately recognizable is 1,900 ft. Sutherland Falls. Located along the trail for the Milford Track, this awe-inspiring waterfall forms the dramatic backdrop for when the hobbits are soaring on the backs of eagles. Even though the sets—with the exception of Hobbiton—have been completely dismantled since completion of the films, movie fans are guaranteed to be touched by the magic of walking in the beauty of the footsteps of The Hobbit. After all, New Zealand is a real place, and while it might now be crawling in dwarves and orcs, standing in the surroundings leaves little to the imagination.

Book a private tour of Hobbiton from Auckland, or check out all Lord of the Rings and The Hobbit tours in New Zealand.