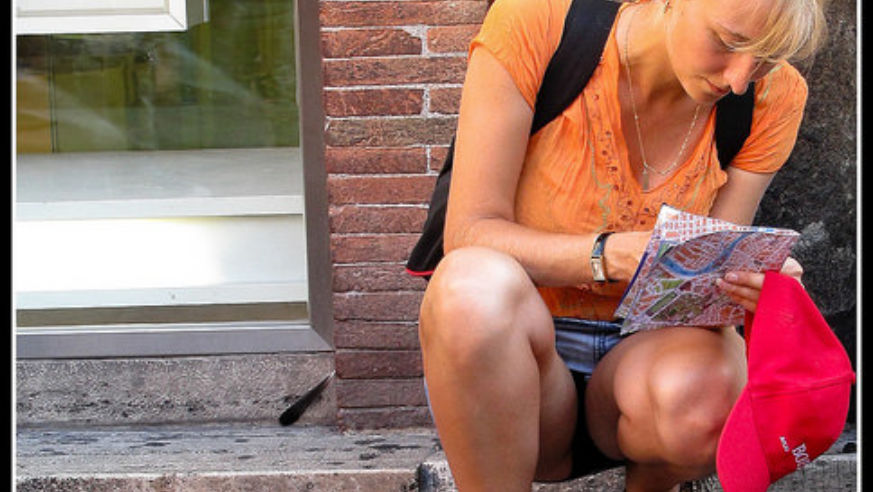 This article was written by Jessica Festa and originally appeared on Yahoo Travel.

I never thought I would travel solo. It kind of just…happened. Growing up, my vacations consisted of Caribbean cruises and road trips spent searching for thrilling roller coasters and America’s best beaches. It wasn’t until I studied abroad in Sydney at the age of 20 that I got the itch to begin expanding my travel horizons. Inspired by Australia’s rich Thai cuisine culture, I decided I wanted to go to Thailand to try the real thing.

I started saving immediately upon my return home to New York, planning to head to Southeast Asia the next summer. Right after Christmas I began asking friends and family if they would be interested in visiting Thailand with me that summer. Doing homestays, hiking through rice terraces, taking cooking classes, perusing night markets, and spending some time volunteering—who could resist such an adventure? Apparently, everyone I knew.

When the time came to book my ticket, I was faced with a big decision: Travel solo or stay home and give up on an experience I had been looking forward to for months. I worried I would feel awkward or that I would be lonely. I worried I wouldn’t be able to communicate with anyone because of language barriers. I worried about finding accommodation and ordering food and getting ripped off. But most of all, I worried I would miss out on an enriching opportunity. A round-trip ticket to Bangkok, please. How many passengers? One!

As it turns out, I shouldn’t have worried. Solo travel has changed my life in ways I couldn’t have imagined or anticipated, and if you take the leap, it’ll change yours too. Here’s how:

Your Self-Esteem Will Skyrocket

Since my first solo travel experience in Thailand I’ve had many others: A summer through Europe, three months through South America, an adventurous journey exploring French Polynesia, some alone time in Morocco, and numerous solo trips around the United States. You see, every time I travel solo it’s like a self-esteem boost as I’m reminded of all that I am capable of.

Traveling with others, you tend to rely on different people for different things. Maybe Joe handles the map because he’s good at navigation while Jenn smooths out any ordeals because she’s an excellent problem solver. When you’re traveling solo, you’re responsible for it all: Reading the map, navigating local transportation, communicating through language barriers to order food or a bus ticket, problem solving when you miss your train or your motorbike runs out of gas, getting un-lost in unfamiliar cities, and any travel mishap in between.

And guess what? You’ll do it! You may not think you can handle all the tasks that come with solo travel, but you’ll surprise yourself. Because when you’re looking out for yourself and a challenge comes your way you’ll accomplish anything and everything.

You Will Learn to Shine

Before I began traveling solo I was much more reliant on other people. I was shy and would hide within the circle of my friends. After traveling solo as a female, however, I realized I could be a social superstar if I tried. I think I truly reached my full socializing potential when partaking in some solo female travel through Europe. The culture is extremely social in itself, with people mingling and sharing wine in public squares and the ability to make friends on every corner. Suddenly, people were coming up and starting conversations with me in money exchanges, train stations, parks, buses, piazzas, and hostels.

As I assimilated more into the European culture and the friendliness of the backpacker circuit, I began initiating conversations myself. I would bring a bottle of wine to a park, offering to share with picnickers in exchange for some cheese and bread, or I would invite people from a walking tour out for drinks at night. I made a lot of great friends, many whom I still keep in touch with. Even more, I realized how easy it was to make friends once you came out of your shell, a skill that has helped me in work, friendship, and relationships.

You Will Develop Independence

While I’m thankful to have always had such helpful parents, being young and inexperienced in the world left me dependent on other people; however, one solo travel trip to Asia left me transformed. When you’re traveling solo, independence isn’t something you need to try to attain; it’s just something that happens naturally. There is nobody there to rely on for money, to watch your luggage when you go to the bathroom or show you the way when you get lost. It’s all up to you. And the more you figure these things out, the more independent you become. I can remember a time when my luggage was lost on a flight from Munich to Nice. It took me a week to get it back, and the airline made me travel 12 hours to pick it up, which made me almost miss my train, which made me almost get to my hostel too late to check-in. Yes it was a hassle, but I figured it out and solved the problem—all on my own.

The best thing about traveling solo is that it forces you to interact with locals and not just talk to your travel buddies from home. When you visit a foreign place you must adapt to the local culture, figuring out how to order food, dress appropriately, and ride the local transport system. If you don’t know how to use a squat toilet in Thailand they’re not going to roll out the red carpet for you and bring you a flusher. You figure these things out as you go, and as you encounter new situations and cultural facets you’re able to engage, process, and react to them without influence from others.

For example, when backpacking through South America I spent much time riding the bus. This is a cultural experience in itself, as you sit with locals for 20 hours at a time, meet local artisans, hear traditional musicians, sample typical foods and see what the farmers are selling. If I were traveling with a friend I may have had to deal with judgmental comments or persuasive opinions, or I might have been too consumed talking with my companion to actually notice the everyday nuances of culture going on around me. Solo female travel has allowed me to take culture in and interact with it without distractions, transforming me into a more worldly and open-minded individual.

You Will Experience Pure Freedom

Probably the greatest gift solo female travel has given my life is the experience of ultimate freedom. When you travel solo you decide where you’ll go, what you’ll do and when you’ll do it. There’s nobody trying to change your plans and there’s no need to compromise. You’re in complete control of your travel experience, and it feels good. As I’ve gotten used to traveling alone, I enjoy traveling without making plans. When I arrive to a place I discover it organically, asking for recommendations from locals and using CouchSurfing to meet new people. I change my plans daily based on how I’m feeling and who I meet. Life’s one big adventure full of experiences to be had, and there is nobody there to tell me I can’t.

You’ll Remember That It Isn’t Permanent

I think what helped assuage my fears from the get-go was the realization that I really was in control of the trip planning, down to the fact that I could hop on a plane home if I really felt uncomfortable. Many people seem to forget that just because you make a decision to travel somewhere solo doesn’t mean it’s permanent. Once you arrive at your destination give yourself a few days to get used to being on your own and orienting yourself. If you genuinely feel terrified or miserable after giving it a fair chance, change your location or go home. When you’re traveling solo, it’s all up to you.

My Most Important Lesson

The most important thing solo female travel has taught me is that anything is possible. It’s opened the world for me and made it a smaller and larger place all at the same time. While it’s easier than ever to cross seas and explore new continents, there are so many experiences to be had and so many interesting people to meet. I’ve gone from blindly believing stereotypes and what I hear on the news to experiencing places and cultures firsthand, creating my own truths. And while I know there are bad people and dangerous places in the world, solo female travel has turned me into an optimist that believes there are many more safe places and people with kind hearts. Solo travel has taught me how much more worthwhile life can be when you live it to the fullest without regrets.

Would you ever travel solo? If you already have, has the experience taught you any valuable lessons? Please share in the comments below.

More from Jessie on a Journey:

Quiz: What Type of Traveler Are You?