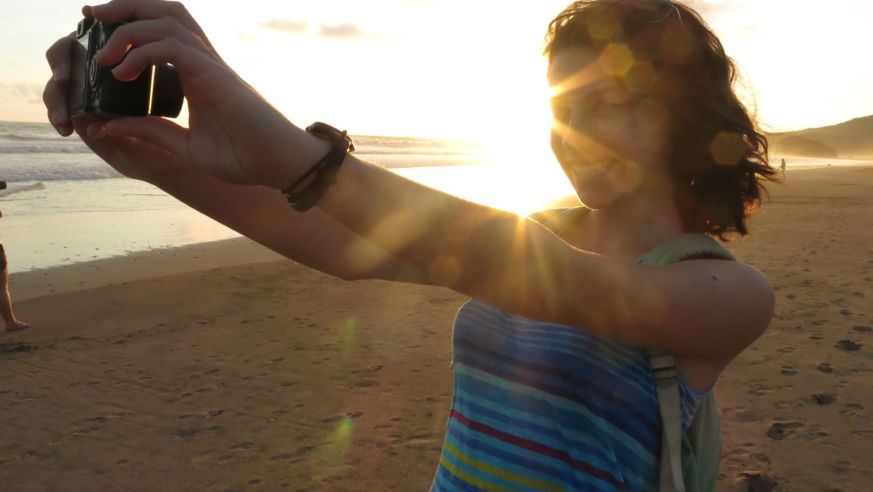 According to an article by The New York Times, 24 percent of people traveled solo on their last vacation, up from last year's 15 percent. More and more people, of all different ages and backgrounds, whether single or in relationships, are saying yes to adventure and letting nothing stand in their way.

I'm proud to say I'm one of them. It started small—a weekend in Washington D.C. by myself back in 2011 because I wanted to see the cherry blossoms and no one else was able to join me at the time—and has resulted in some of my most memorable trips: a solo trip to Paris and the beaches of Normandy this time last year for the 70th anniversary of D-Day, a solo road trip through the Badlands and Black Hills of South Dakota, and more recently, a solo road trip adventure through Southern Utah and Northern Arizona.

The freedom is intoxicating

Have you ever been on a trip where someone else is calling all the shots, directing you around from place to place, and giving you only a limited amount of time to explore the things that you're really interested in seeing? Kiss all that frustration goodbye! On a solo trip, you are in charge of your own destiny. What do you really want to see? Where do you want to eat dinner? Would you rather stay in a fancy hotel or chill out in that cozy looking hostel you spotted on your way into town? It's all up to you to do as much (or as little!) as you want each day, so take it easy and focus on why you wanted to be there in the first place.

Having your own space and independence is great, but there comes a time during every solo trip when you just want to interact with people again. For me, it usually happens at the end of a long day around dinner time. I've learned that it's way more fun to sit at the bar (instead of at your own table in a restaurant) and let the people come to you. Usually a prop like a book or a map full of circled spots you can't wait to check out will do the trick. People are naturally curious and will probably ask you about your plans, where you've been so far, and in my experience, offer funny stories or suggestions about where I should head next. I've had some amazing conversations, made new friends, and even went bar-hopping with a South Dakota rancher and his cowgirl girlfriend once while I was in Deadwood all because we'd been chatting about rock and roll music and they decided to show me around town—all things I probably never would have experienced had I been traveling with a friend and talking to her the entire time.

You get to choose your own adventure

Use this uninterrupted time wisely. Do things you're interested in, however silly or dorky your friends and family might have said they are, because guess what, they're not here to tease you about it. Pull over and take a silly photo with the giant smiling ear of corn on the side of the road if you want to. Stop at every sign along Scenic Byway 12 in Utah that says "scenic overlook" because there's no one there to tell you not to and every view is amazing. This is your adventure after all, so go for it. Or if you feel like you need a day off from all the sightseeing and want nothing more than to veg out in a pretty park in the middle of Madrid for the day, make it happen.

It's a rare chance to unplug and be in the moment

You're probably going to hate me for saying this, but if you want to really experience a place, you need to unplug and just be there. I always carry my iPhone when I travel but only use it for taking photos. I purposely carry a paper map at all times because wacky technology problems always have a way of finding me, especially when I'm abroad, and I've learned not to rely on a sometimes-faulty GPS. That being said, as long as you have a basic idea of where you're going, wandering aimlessly around town can also be an incredibly enriching experience, especially when you stumble upon random events like free rock concerts and opera performances in Plaza Mayor or movie premiere parties in Times Square.

Not everyone is out to get you

It can be a little unnerving at first, especially when you're traveling by yourself, but don't be afraid to talk to the people around you. You might up meeting someone who could change your life, or at the very least you'll have fun swapping crazy travel stories for a while. It's important to follow your gut when it comes to your own personal safety, but also to remember that not everyone is out to get you. Believe it or not, people are curious about other people and it's amazing to see how similar we all are despite our different cultures and the places we come from. Everyone on earth worries about their kids, hates getting stuck in traffic, and wonders where life will take them. Embrace it.

It's a great way to blend in with the locals

I've been to Paris a few times now, usually with a group, but occasionally by myself. There's nothing like donning a black and white striped dress, smart black trench coat, your favorite comfy pair of boots, and that cute little red hat you picked up on a whim, and strutting your supposedly French self on the swanky streets of Paris. It was really fun to blend in with the crowds as much as possible and get smiles from the locals. A lot of times, people would start speaking French to me—including some American tourists who stopped and asked me to take photos of them, in French. I entered French shops and restaurants and greeted people with a hearty "Bonjour, Madame! Bonjour, Monsieur!" just like I saw the locals doing. Most people would immediately start chatting and after I reached the threshhold of my tourist-level French, I'd politely smile and reveal that I really didn't speak too much of the language. In response, I'd usually get a chuckle, a smile, and a confession from my new friend that their English was not so great either, to which I always said, "No, no, that's okay. My French is worse." They loved that one.

You'll get to know a new place from the inside out

I love taking public transportation and staying in Airbnbapartments when traveling solo so I can get a sense of what it's really like to live in a place. I've done this so far in Milan, Madrid, and Venice Beach in California. I stayed in each place for under $100 a night in the city center and my hosts gave me amazing suggestions for places to check out that only the locals know about. It's a nice change of pace to wake up to the sounds of a real neighborhood and be able to prepare a quick meal or do last-minute laundry in the apartment if I need to—just remember to leave an extra day for your clothes to dry on the line as most European homes don't have dryers.

You can always join a group tour if you want to

If you're more of a social butterfly or are starting to miss interacting with people on a daily basis, consider staying in a hostel, where you have the option to book a bunk or your own private room for less. Generator Hostels in Europe are built to feel more like an artsy boutique hotel than your average hostel. I've stayed at Generator London and Generator Barcelona so far, but they're also in Paris, Copenhagen, Dublin, Berlin, Hamburg, Venice, and Rome. The best part? Access to movie nights, game nights, free concerts, tapas tastings, bar crawls, and other events to help you get to know your fellow travelers. Thanks to sites like MeetUp and others like Zerve and Viator that specialize in group walking tours and other local adventures, you're never too far from a night on the town within the safety of a group should you feel the need. If you're looking for a longer guided trip but still want to do your own thing, check out tour companies like Intrepid Travel, G Adventures, and Contiki (if you're between the ages of 18-35), as they will pair you up with a roommate of the same sex and never charge extra single supplement fees for traveling solo.